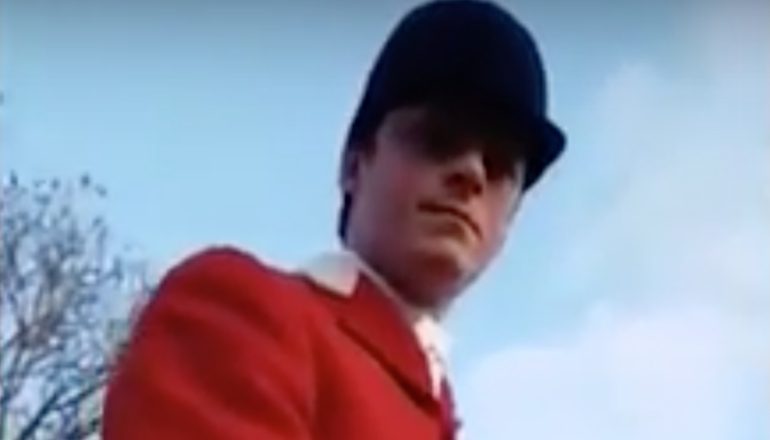 A Tory councillor has resigned after making offensive comments to a woman who challenged his behaviour on a hunt. Charles Carter, a former councillor for Breckland Council, handed in his resignation following his suspension. And coming after reports of hounds attacking family pets, it is more bad press for the pro-fox hunting lobby.

Linda Hoggard was taking wildlife photos prior to seeing the hunt. She then followed them for several hours. And finally, she approached Carter, who was master of the hunt, and asked him:

Excuse me, did you know fox hunting was banned?

In the video footage, Carter looks uncomfortable, but refuses to answer. Instead, he gets out his phone, apparently starts filming her, and asks for her name. He then continues, in a smug tone:

Can I take to you bed, please? You’re very pretty.

And he finishes the exchange by asking:

Can I have your number please?

Speaking about the incident, Hoggard said:

I’ve always disagreed with fox hunting even being a country person. I’m not an activist – the last hunt I followed was 15 years ago. I’m a housewife with children and they were hunting near me and I thought right I’m going to follow.

I didn’t know he was a councillor. I didn’t even know him. I just went out and then confronted him. What he gave me was bang out of order.

Upon seeing the footage, Breckland Council suspended Carter. A spokesperson for the council stated they had seen the video:

In which one of its councillors made inappropriate and offensive comments.

I was appalled by the conduct of one of my Conservative councillors, who has clearly brought the party and the council into disrepute as a result of his behaviour.

As previously reported in The Canary, there has been widespread criticism of hunts after hounds attacked pets, including a dog on a beach in Cornwall. And in another case, a pet cat’s cheek was torn apart by a dog.

Video footage from the Ledbury Hunt shows a protester attacked by a hunter. A spokesperson for the Hunt Saboteurs Association said:

The unprovoked attack happened after hounds from the hunt had chased a fox into a badger sett. Sabs intervened to save the fox and were attacked by the hunt employees. This footage clearly shows the unprovoked attack on sabs by one of the terriermen. He throws a sab to the ground, punches them repeatedly and kicks out at other sabs nearby.

A spokesperson for the Ledbury Hunt commented:

There is an internal hunt investigation regarding the incidents that happened throughout the day, all of which took place on private property.

Opposition to hunting is at record levels. Despite this, Theresa May is still promising a free vote to MPs on repealing the ban. Yet evidence keeps growing that the ban needs strengthening rather than repealing. Hunting is the real barbaric pest that needs to be exterminated from our countryside for good.

The Canary contacted Charles Carter and the Middleton Hunt for comment, but did not receive a response.