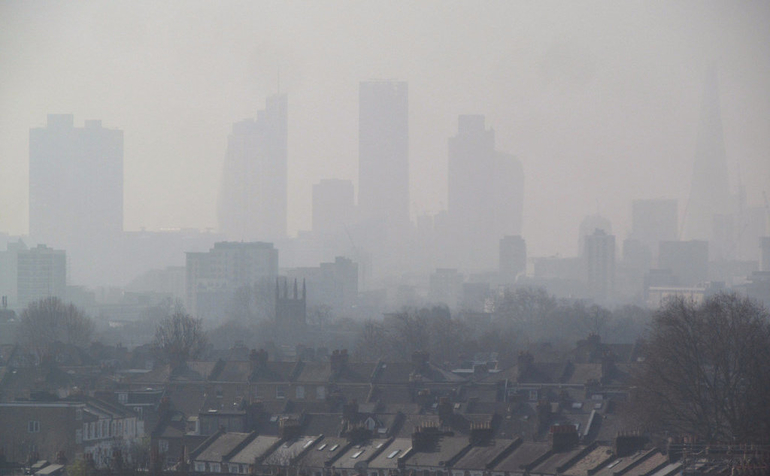 London’s air pollution has been worse than Beijing at some points during January. China’s capital is notorious for its smog. But it looks like London is gaining this reputation as well.

Pollution levels have been particularly high in the City, Westminster, Kensington, and Camden. The levels refer to PM2.5, particulate matter (or fine particles of dust) smaller than 2.5 micrometres in diameter. King’s College London (KCL) has identified “black spots” in London, where pollution is dangerously high.

But it’s not just the capital that’s suffering. The World Health Organisation (WHO) published a report last year, highlighting that 90% of the UK’s population breathes highly polluted air every day.

Many people’s New Year resolution is to become healthier. We can certainly make lifestyle choices to improve our health. But the very fact of living in the UK creates health risks that we simply can’t avoid.

UK air pollution causes around 40,000 early deaths a year. Air pollution is linked to heart disease, stroke and lung disease. Plus, it’s a nightmare for people suffering from asthma.

The government plans to reduce levels of nitrogen dioxide [pdf] in order to reduce the quantities of PM2.5.

But surprisingly, one of the big culprits behind air pollution is wood burning stoves. Domestic wood burning contributes 2.4 times more PM2.5 pollution than all road traffic in the UK. And while road transport is difficult to avoid, wood burners really are an optional extra for most people. KCL highlights that this year there have been “unusually high levels of domestic wood burning”. ClientEarth’s air quality lawyer Anna Heslop said:

Wood burners can contribute to the most serious smog episodes which we see in winter, like those which Londoners are experiencing at the moment.

During the worst episodes of very high pollution, people need to be advised not just on the levels but on how they can avoid adding to the pollution, and that means everything from using cleaner transport options and leaving their cars at home to avoiding using wood burners.

India’s capital, Delhi, also has a serious air pollution problem. In order to significantly improve the situation, Delhi has introduced an outright ban on disposable plastic.

According to Indiatimes, the country is responsible for 60% of the plastic in the world’s oceans. The ban has been introduced following complaints of the mass burning of plastic at three rubbish dumps in the city. This activity has been blamed for causing dangerous air pollution.

So while India makes massive improvements in protecting its environment, and in turn its people’s health, the UK fails to act. But worse than that, the High Court ruled that the government’s plans to tackle air pollution are illegal. Green MEP Keith Taylor said:

The failure highlighted by the judge today is as much moral as it is legal: ministers have displayed an extremely concerning attitude of indifference towards their duty to safeguard the health of British citizens.

It is an abysmal moral failure. No one should be born into an environment in which their health is inherently at risk. The government sits idly as we choke on smog. Perhaps we should look to India for inspiration, to see what kind of action is necessary to change the environment and our lives for the better.