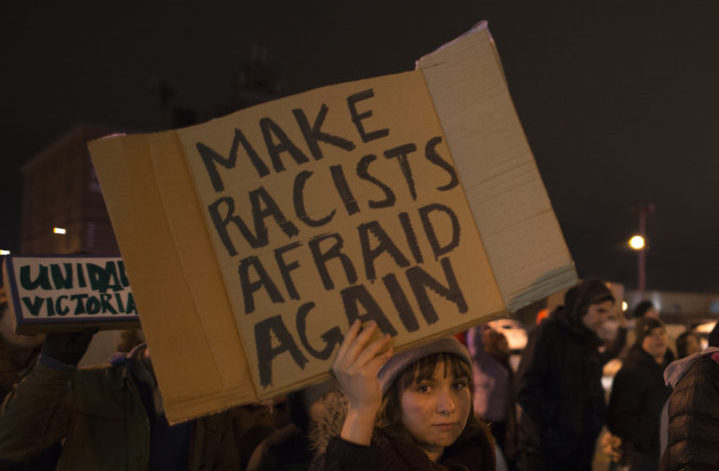 A former senior State Department official has blown open US President Donald Trump’s plan to restrict immigration from seven Muslim-majority countries. The plan, outlined in new executive orders, calls for an initial 30-day ban on entry of travellers from those countries – even if they have visas.

This is just the beginning. The Trump Administration insists these are just immigration “restrictions” – not the full on ‘Muslim ban’ that Trump previously campaigned on.

Not designed for safety

But according to a former State Department official who specialises in combating extremist ideology, Trump’s executive orders will not keep America safe. Instead, they will erode America’s security.

“The supposed reason behind the travel ban being announced imminently for seven mostly Muslim countries (Iran, Iraq, Libya, Somalia, Sudan, Syria and Yemen) is to keep America safe. But it’s not designed to do that,” wrote Shahed Amanullah, the State Department’s Senior Advisor for Technology from 2011 to 2014, in a Facebook post.

If it were, it would include countries like Saudi Arabia (9/11), Pakistan (San Bernardino), Nigeria (underwear bomber), UK/France (shoe bomber), and several other countries from which people abused the visa system to attempt/carry out acts of terror.

During his tenure, Amanullah was a White House advisor on countering extremism ideologies online. He worked closely with the CIA, the Department of Homeland Security, and the US government’s National Counter Terrorism Centre (NCTC).

A study of Daesh (Isis/Isil) personnel files by the Combatting Terrorism Centre of the US Military Academy at West Point painted a different picture of Trump’s list.

The country where Daesh is most recruiting terrorists is Saudi Arabia, which sourced 797 Daesh fighters. This is followed by Tunisia (640) and Morocco (260).

What this policy does do is give people with simplistic views about Islam’s link to terror a false sense of security, and stokes additional hatred toward millions who have nothing to do with terrorism. This ban fuels xenophobia for domestic political gain while disguised as counterterrorism policy.

So instead of preventing terrorism, Trump’s plans will just stoke fear and hysteria toward all Muslims.

We realised that this whack-a-mole approach wasn’t sufficient and that terrorists were coming from places that were our allies.

There are more effective ways to increase America’s security, suggests Amanullah. Like building cultural and economic ties, which makes terrorism less likely. He points out that “every year we educate the best and brightest from these countries.” This helps “build bridges between our countries, aligns our cultures and values, brings in millions in revenue for our universities, provides the basis for deep economic ties, and more.”

Now, these gains are in jeopardy.

And there’s another risk.

Amanullah warns that “anti-Muslim bigots smelling blood will call for adding Saudi Arabia, Pakistan, Turkey, and several other countries to the list. Then Trump will be stuck. Adding those countries will come with severe economic, diplomatic, and policy costs – effectively killing existing anti-terrorism relationships which have proven useful in the past.”

Where does that leave Trump’s grand plan? With even more vulnerability to terrorism:

In the end, we’ll have demonised Muslim communities both here and abroad, unraveled anti-terror relationships, and crippled economic ties. And we’ll be no safer for it all.

Worse, Trump’s list excludes Muslim countries where Trump and his family have major business investments. Like Saudi Arabia and Turkey. That’s in spite of mounting questions over those governments’ complicity in sponsoring al-Qaeda and Daesh.

So it really doesn’t matter what you think of Muslims. The real problem is that Trump’s ban won’t do what it says on the tin. It will simply make things worse, at a massive cost to American taxpayers, while failing to identify real terrorists. Shahed Amanullah puts it perfectly:

You don’t have to like Muslims to oppose where Trump is going with this travel ban. You just have to take America’s safety, economy, and standing in the world seriously.