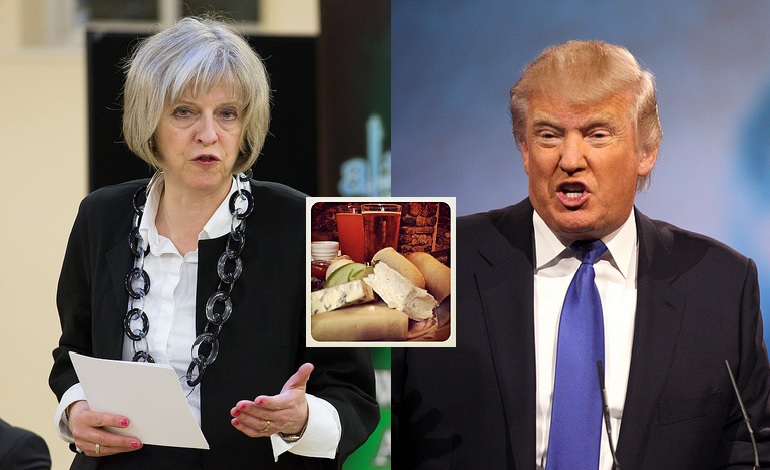 On 26 January, Theresa May flew to the US in preparation for her first ‘grovelling‘ meeting with Donald Trump. But prior to her departure, anonymous government ministers told The Guardian exactly why May intends to heap praise on the new president. It’s because the government is “hopeful” that a good relationship with the President will give UK cheese better access to the US market.

So essentially, the UK government has decided that selling cheese trumps all of the US President’s actions since taking office.

Theresa May: Ambassador for UK cheese

May’s visit will last two days. Prior to meeting Trump on 27 January, she will address the Republican Party at its annual retreat. In her speech she will characterise the UK as a “a great, global nation” that, following Brexit, is “ready to build relationships with old friends and new allies alike”. Of her country’s relationship with a Trump-led US, she will say:

The Tory government hopes that one aspect of the ‘renewed’ UK-US relationship will be a new bilateral trade deal. And it is one that Trump already seems committed to. Yet, as the anonymous ministers pointed out, cheese trade in particular is high on the government’s agenda. It believes that a deal would create “big potential for British dairy farmers and cheese-makers to export more”, according to The Guardian.

Cheese producers, however, seem less enthused. A spokeswoman for the industry’s lobby group, Dairy UK, said that while a US deal “is high on the agenda”, an EU agreement is “imperative” because 80% of dairy exports currently go to Europe. There is also a difference in environmental food standards between the UK and US. Standards are lower in the US. But these differences will be “ironed out” during negotiations, one ministerial source claimed.

For many other politicians in the UK, however, there seems little chance of ironing out differences with Trump. Following the President’s admission that he thinks torture works, and that the US has to “fight fire with fire”, numerous politicians spoke out against him. And they called on May to review her “praise” of the President.

. @theresa_may when you meet @realDonaldTrump, you must put our values, not America first.
Say no to Waterboarding. It's torture

Nothing shd shock me anymore but am so disturbed that @Number10gov thinks it's OK to brief TMay "praising" Trump just as he endorses torture https://t.co/Zt8Yw3zuv9

And Trump’s torture endorsement was not the only issue for MPs:

Trump announces migration ban on Muslims, the Mexican wall & the return of torture. Theresa May hails his election as a "moment of renewal". https://t.co/zgp6uEa5vP

You cannot lead on a global stage by advocating torture, disgusting racial stereotyping & turning back the clock on women's rights worldwide https://t.co/LqNQ08Lgbu

A spokesperson for the Prime Minister said the UK’s position is “very clearly” that “we don’t condone torture, inhumane or degrading treatment in any form”. But that a close relationship with the US President will enable the UK to raise these issues “directly and frankly”.

Snuggling up to an ars*hole

Trump’s endorsement of torture is not the only issue the UK should raise “directly and frankly” with him. He has made a myriad of decisions in his first days as president that need addressing. Such as his ban on US funding of groups that provide information on abortions. Or his authorisation of the Keystone XL pipeline and Dakota access pipeline. Both of which are dangerous, and the latter in violation of Native Americans’ Treaty rights.

And perhaps the truly Hitler-esque renaming of his inauguration day to “National Day of Patriotic Devotion” could be brought up. Along with his executive order that will put a target on the back of illegal immigrants by publishing a weekly list of crimes they commit.

Will May frankly raise these issues with Trump? Not if it risks the rights of the UK’s cheddars, blues, or Wensleydales to prosper in the US market, it seems. Priorities, eh?

– Read more Canary articles on Theresa May, and Donald Trump.