On 8 March, Chancellor Philip Hammond announced a £100m scheme to employ GPs in A&E departments across England. Now, one ‘doctor’ has responded, and is lighting up social media.

In his 2017 budget, Hammond announced funding for GP-led triage projects in A&E departments, saying they could have a “significant and positive impact on A&E waiting times”. 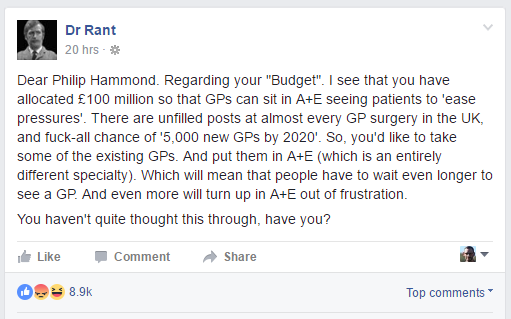 Dr Rant, which is “edited by a team of doctors who value their pseudonymous status”, writes:

Regarding your ‘Budget’. I see that you have allocated £100 million so that GPs can sit in A+E seeing patients to ‘ease pressures’.

There are unfilled posts at almost every GP surgery in the UK, and fuck-all chance of ‘5,000 new GPs by 2020’. So, you’d like to take some of the existing GPs. And put them in A+E (which is an entirely different specialty). Which will mean that people have to wait even longer to see a GP. And even more will turn up in A+E out of frustration.

You haven’t quite thought this through, have you?

The post has now been shared thousands of times.

The crisis in general practice

GPs in England are facing skyrocketing workloads, a recruitment crisis, and a looming retention crisis, as the vast majority of existing GPs plan to leave the profession or reduce their hours within the next five years. Patients, meanwhile, are waiting longer than ever for GP appointments, and doctors warn that patient health is being put at risk.

So it’s unsurprising that many in the medical profession share Dr Rant’s point of view. The Chair of the British Medical Association (BMA), Dr Mark Porter, has said:

Having GPs in A&E won’t reduce admissions – if anything this could have the effect of attracting more patients to hospitals. The government also needs to explain how it will fund and recruit GPs to work on site at hospitals when there already aren’t enough to meet the needs of the public. Many are already working in practices with permanent vacancies which they are unable to fill, despite government promises at the last election to recruit 5,000 more doctors into general practice.

And the Chair of the General Practitioners Committee (GPC), Dr Richard Vautrey, was similarly forthright:

GPs and their staff are struggling on a daily basis to cope with rising patient demand, stagnating budgets and endemic workforce shortages that have left many GP practices unable to deliver enough appointments to patients. Putting GPs in A&E will do nothing to address this crisis.

As was the Chair of the Royal College of General Practitioners (RCGP), Professor Helen Stokes-Lampard:

We feel that the best place for GPs is working with patients in their communities to provide high quality general practice.

The NHS is one of the best health services in the world. And it’s disintegrating before our eyes. Hammond’s budget showed that the government has no intention of giving the NHS the investment it needs. But Dr Rant’s response is perfect. The rebuttal shows exactly how inept this government’s policy is. It takes with one hand and sticks two fingers up with the other.