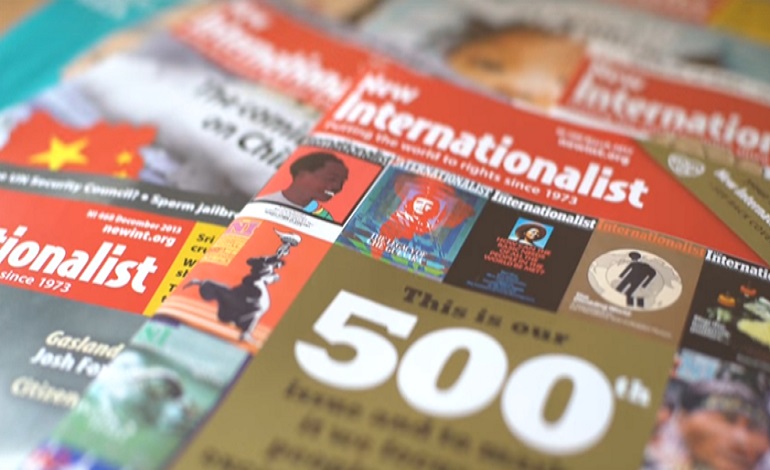 One of the most recognisable left-wing publishers out there is undergoing a transformation – one that we can all get involved in. As it’s changing the way it does business. Permanently.

The New Internationalist (NI) began in 1973. It has a monthly magazine and website of the same title. It is also a publisher, releasing books such as Canary Editor-in-Chief Kerry-Anne Mendoza’s Austerity: The Demolition of the Welfare State and the Rise of the Zombie Economy. But now, it’s crowdfunding to set up a new business model. One it is hoping will secure its future.

The Canary spoke to Co-Editor of NI Hazel Healy about the project. She said that, with print media in decline, its subscriptions had taken a hit. But this doesn’t mean it’s all doom and gloom at NI:

At the same time, things are starting to look up, digital sales are increasing and circulation has stabilised – we’re starting to get to grips with the information age. And the same internet that bricked our business model has given us reach beyond our wildest dreams. Our reporting at the UN climate talks in Paris reached over 28 million. That’s something our founders couldn’t have imagined 44 years ago when this magazine began.

So the team at NI are trying something different. Instead of cutting back on quality and reducing content, NI is being ambitious. Upscaling to reach more people and, at the same time, setting itself on a firm financial footing. And it’s doing this by offering community shares. Healy says:

In terms of why we chose a community share offer, we have run as a worker’s co-op since the 1980s so co-operative principles are in our DNA. In many ways it felt natural to take these principles one step further and open up. We’ve never had a benefactor. Obviously an oligarch is out of the question. It made sense to turn to people who share our values. The idea of reader shares has actually been on my radar for a while.

The deal is simple. NI aims to raise a minimum £500,000 through the world’s biggest-ever media community share offer. People can invest from anywhere in the world as long as they are over 16 years old. Each share costs £1 and shareholdings range between £50 and £100,000. And a small shareholder will have just as much power as a large shareholder. But the rewards will differ, depending on how much they invest. And the idea gets even more interesting.

NI will have a Common Council: a forum where every shareholder has a say in how NI runs. This is actually not straightforward, and Healy admits that NI is in “uncharted territory”:

It’s fair to say we don’t know exactly what it’s going to look like in practice – yet. We see the Common Council as the place where investors can actively engage with editorial content and other aspects of the business. As a minimum, it will allow supporters to influence content choices and to tell us how we are doing. A major challenge for a global co-operative is how do we all meet? How do we make sure someone in Manila has equal input to someone in London?

The magazine is renowned for its coverage of issues many publications shy away from. One of Healy’s own favourites is an issue which looked at post-Ebola Sierra Leone. It worked with citizen journalists to explore the impact of the epidemic on friendships, relationships, and communities across the country. And she is confident that maintaining this groundbreaking stance is possible in the future:

That is why we are doing the community share offer – so that we can maintain this stance. We’re non-profit, mission-led; socially-conscious journalism, with a world focus on the under-reported is the only kind we are interested in doing. That’s what makes us unique. If we can’t do that, there’s no point in being here.

And magazines like NI are crucial in the present climate. As Healy herself says, “With fake news and nationalism spreading, there’s never been more need for the trusted journalism we do”. But she believes the public are more aware of the hidden agendas of many media outlets, and their distortion of the truth:

I think it’s a good moment for the media in many ways. A moment of truth. People are realising that it’s more important than ever to know where your news is coming from. They have watched media distortion trick British people into voting for Brexit, and seen fake news help to swing the US elections. People know there is a problem, and they are starting to demand better.

Publications like NI are crucial to what the public are demanding. High-quality, fact-checked, socially responsible journalism that is truly global. By allowing the public to invest and participate in NI’s decision-making, NI is breaking conventions. And setting a benchmark for the rest of the truly independent press.