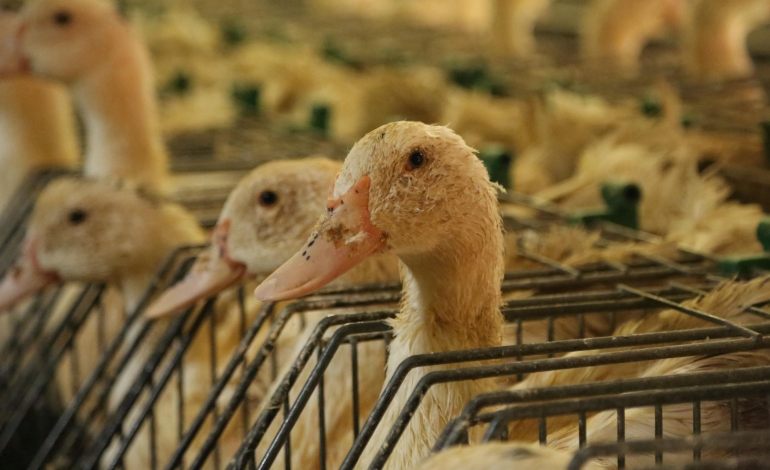 Celebrities and MPs have joined animal protection organisation Animal Equality in calling on the government to ban imports of foie gras post-Brexit.

The production of foie gras has been banned in the UK because of the extreme suffering it causes to ducks and geese. This ‘delicacy’ is made by a process known as ‘gavage’, whereby ducks and geese are repeatedly force-fed, leaving their livers fattened and diseased. The conditions in which the animals live, and how they’re treated, mean that they are in constant pain. And a natural life for them is out of the question.

Although foie gras production is illegal in the UK, EU rules mean that the product can still be imported and sold at upmarket gastropubs, restaurants and stores. UK Executive Director of Animal Equality Toni Shephard says that this kind of inconsistency is unacceptable:

For the sake of the thousands of ducks and geese still suffering on European foie gras farms, this hypocrisy has to end.

These kinds of double standards are widespread in society. We shut down sweatshops in the UK, but we import clothes made in sweatshops abroad. And while we have outlawed child labour, young children work in dangerous conditions, mining for the cobalt necessary for our smartphones.

Support for the ban

Various celebrities and MPs are backing Animal Equality’s campaign for a #FoieGrasFreeGB. Actress Joanna Lumley says “[foie gras] must be banned as soon as possible following our exit from the EU”. Downton Abbey star Peter Egan is also strongly opposed to the ‘delicacy’, describing its production as “cruel and horrible… disgusting to contemplate”.

Meanwhile, MPs in support of the ban include Labour’s Chris Williamson, Conservative Henry Smith, and the Greens’ Caroline Lucas. And according to a YouGov poll, while 7% of Brits consumed foie gras in the last 12 months, 77% of those surveyed support an import ban. This is an overwhelming majority. It remains to be seen whether the government will be swayed by public morality. Environment Secretary Michael Gove said that, in terms of British farming:

We have to maintain high standards of environmental and animal welfare protection and I am not going to compromise on this.

But are animals in this country the only ones that matter? If “we are nation of animal lovers”, as Williamson puts it, then the import of foie gras becomes difficult to justify.

In any case, animal rights activists are still pressuring establishments to stop serving it. Recently, the owners of the Bridge Inn at Calver, Derbyshire, took foie gras off their menu following supposed ‘bullying and intimidation’ from protesters. The activists said this was “a victory for the geese and ducks that are abused and tortured every day…” But a greater victory would involve successfully pressuring the government to ban foie gras.

Brexit presents an opportunity to ban foie gras in this country once and for all. However, leaving the EU may also spell trouble for animal welfare. As The Canary previously reported, May has promised that the UK will continue to have high standards of animal welfare. But Theresa May wants the UK to leave the single market, which Brexit secretary David Davis also supports [paywall]. And leaving the single market could mean that we’d lose out on some important animal welfare regulations.

Brexit is not such a black and a white issue when it comes to protecting the interests of animals. May’s hard Brexit could jeopardise animal welfare in some ways. On the other hand, not being bound by EU rules also means we can more consistently protect animals. Ultimately, though, foie gras is a single campaign issue. While it deserves attention, we also shouldn’t lose sight of the toll of British factory farming on animals. Force-feeding geese may seem particularly cruel for the sake of a ‘luxury’ food consumed by a tiny minority. But if we are really a nation of animal lovers, then the interests of all animals should matter.