Noam Chomsky flips the debate about ‘fake news’ on its head, in a room full of Google staff [VIDEO] 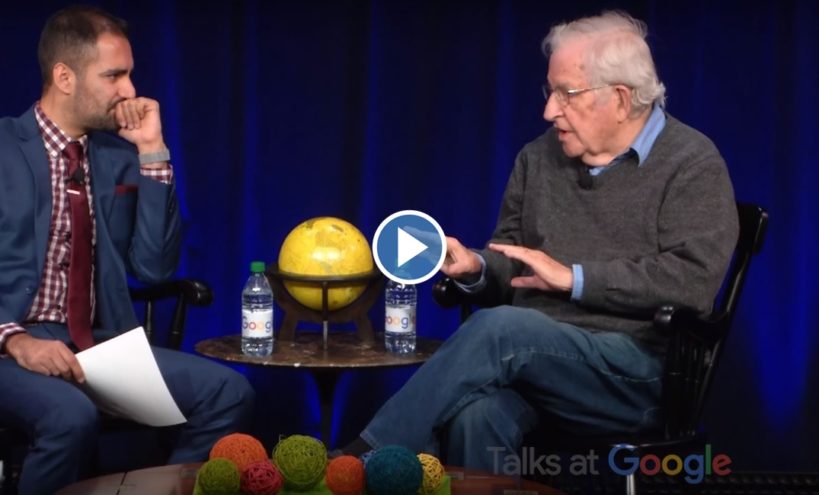 Legendary academic Noam Chomsky spoke to Google recently. And when the interviewer asked him a question about ‘fake news’, he totally flipped the debate on its head, targeting the whole media set-up today.

Google’s interviewer asked: “How do you think Google can and should handle the fake news problem? We have a big hammer. We’re looking for nails.”

Well, by not contributing to it.

After an uncomfortable pause, he criticised the media’s reliance on advertising for “contributing to the narrowness of coverage and even to the kind of coverage”. This, he said, meant a “distortion of the world”.

The “actual news”, he said, should be asking questions like:

Why, for the last generation, have we constructed socio-economic policies and political policies which are developing a perfect storm which could destroy us?

But that’s the type of question that, all too often, is ignored in the mainstream media.

Chomsky then explained why relying on advertisers can be so dangerous:

See, advertising’s a very interesting phenomenon. Any of you who’ve taken an economics course know that… the marvels of the market that we’re supposed to admire and worship are because the market is based on informed consumers making rational choices… Turn on your television set. Do you see efforts by corporations to create… informed consumers making rational choices? Is that what you see when you see an ad for cars? If we had a market system… when General Motors is advertising a car, what you would see is a list of the characteristics of the car, along with a report by Consumer Reports saying what’s wrong with it and so on… But you don’t see that.

In reality, he said:

Huge amounts of capital are expended every year to try to undermine markets… by creating uninformed consumers making irrational choices; and driving them to consumerism – which atomises [society] – rather than serious things.

That’s what ought to be taught in economics courses: massive efforts by the business community to undermine markets.

In the context Chomsky was talking about, we can see media coverage – and the electoral politics it influences – as a market; and one that corporations are manipulating by forging “uninformed consumers”.

Along with Edward S Herman, Chomsky laid out the “five filters theory” in the 1988 book Manufacturing Consent. These filters shape the stories that mainstream media outlets deliver to the public.

Earlier this year, Al Jazeera released a video called The 5 Filters of the Mass Media Machine. The animation explains these filters: ownership, advertising, the establishment, the ‘flack‘ encountered by the media if they “stray away from the consensus”, and the ‘common enemy’.

As The Canary has stressed previously, new media outlets are doing their best to break free from these five filters. But for high-quality and independent investigative journalism to thrive, we need to talk less about ‘fake news’ and more about how to create a system where the rich and powerful no longer dominate or determine media coverage. And to change that environment, we need a readers’ revolution.

Readers need to stand up and say: ‘Yes, I’m sick and tired of corporate bias in the media, of the smears and the personal attacks, and of the rich and powerful not being held to account for their actions. And I’m prepared to fund an independent media.’

Without that, we can expect what Chomsky calls the “distortion of the world” to continue.