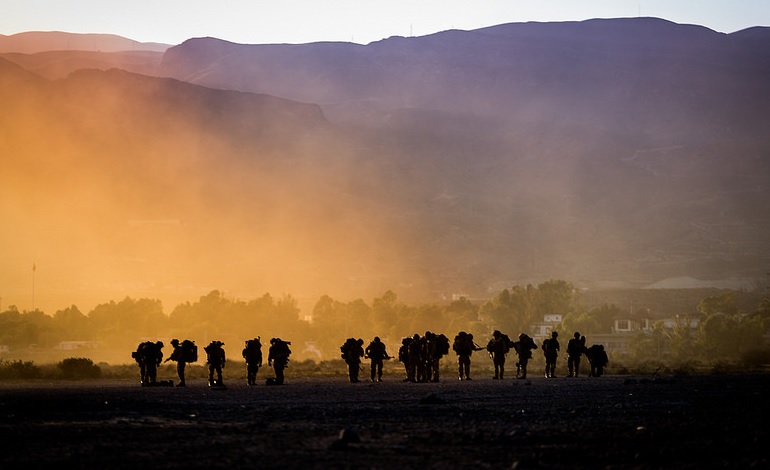 The British government is finally sending our troops into a war most people can get behind.

According to The Mirror, a select number of army troops are currently in Africa. The task force is helping to protect elephants from illegal slaughter. But in Africa, ivory poachers reportedly have links to extremism; so the money derived from killing these majestic and endangered creatures ends up in the hands of terrorist groups.

The British army is therefore engaged in a two-fold mission: save the elephants and starve extremists of funds.

16 elite service personnel are working in Gabon, Africa. The British army sent the troops after receiving an SOS call from authorities in the country. The army personnel are training rangers there in techniques that can combat the poaching and protect themselves.

The SOS call came in a treacherous climate for elephants in the area. According to intelligence, poachers have killed 25,000 forest elephants in just one region of Gabon over the last 10 years. And the authorities believe these killers have links to extremist outfits. Christian Mbina, Gabon Parks technical director, said:

We’re convinced on all evidence we have that the money raised by poaching goes to fund terrorism.

The network and movements of Boko Haram are known all over Africa now. The same way Al-Shabaab are involved in ivory poaching in the east of Africa, Kenya and Tanzania, Boko Haram do the same here. The big terror groups in Africa now live from piracy and poaching.

The army has also been to Kenya, Tanzania, Democratic Republic of Congo, Rwanda and Ethiopia in the past five years helping to combat poaching.

Stopping these poachers from being able to kill elephants for their tusks is, of course, essential. But equally important is choking off the demand for ivory products; and therefore removing the financial benefit of poaching. There is, however, a disconnect between the British army’s actions and those of its government in that regard.

The current Conservative government did not pledge to place an outright ban on trade in ivory in its manifesto. In fact, it didn’t mention the word ivory at all. It only claimed that the party would “champion greater conservation co-operation” to protect rare species.

Currently, the UK only has a partial ban on ivory. Any ivory younger than 70 years old is illegal. But many argue that the legal trade in antique ivory provides a cover for illegal ivory to reach the market; because people can manipulate newer tusks to make them look older. A BBC investigation, in fact, found proof of such manipulation on the UK market. And the number of elephant deaths also supports that thesis.

So without a full ban on ivory, the UK cannot ensure that it’s not complicit in the illegal trade in tusks. And now, wildlife authorities in Africa are claiming that the proceeds of this crime are funding terrorists. In other words, then, if the UK continues to buy into the ivory trade, it could also be indirectly supporting extremist groups financially.

Furthermore, if the UK government doesn’t legislate to ban ivory altogether, it’s actively working against its troops’ mission. And given the poaching industry kills one elephant every 15 minutes – with only around 350,000 left in total as of 2016 – there’s no time for the British government to drag its heels.

The ivory trade is rapidly wiping elephants off the face of the earth. And it’s now empowering terrorists too. So surely it’s time for Theresa May’s government to get behind her troops and end the despicable and illegal trade once and for all in the UK.

– Write to your MP and urge them to back an ivory ban.