Enormous iceberg breaks off from Antarctic ice shelf - The Canary 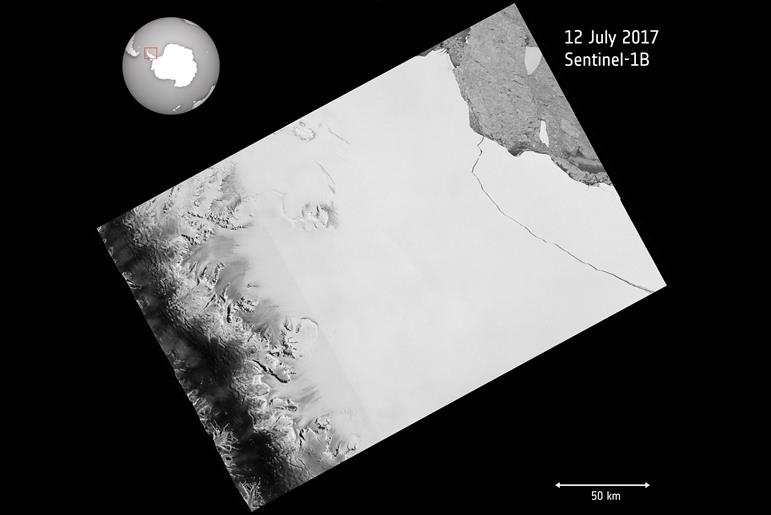 An iceberg a quarter of the size of Wales has broken off from the Larsen C ice shelf in Antarctica. The iceberg is 5,800 km2 and contains one trillion tons of ice. That makes it one of the largest icebergs ever recorded. It has probably even made the top ten in the record books:

The writing’s on the wall

The iceberg, shown in new satellite imagery released on 12 July, finally detached from the main ice shelf after months of threatening to do so. In other words, its bid for freedom wasn’t unexpected. Scientists have been monitoring the progress of a crack that has traveled rapidly across the front of the shelf for many years. The crack’s progress had accelerated since early 2014, making the generation of a large iceberg like this ever more likely.

That crack propelled Larsen C into the news in early 2017. It tore rapidly through regions of softer ice that were previously thought to slow down rifts and cracks. These areas are called ‘suture zones’ because they bind together (or suture) different segments of ice. Last week, Project MIDAS (a team based at Swansea University that has been monitoring Larsen C) reported that just three miles of ice held the iceberg-to-be to the mainland:

The rift tip on Larsen C is getting messy – less than 3 miles to go! https://t.co/AnCVbyPg1L

The Larsen C ice shelf is on the Antarctic Peninsula, which has lost several ice shelves in the last few decades. Nearby ex-ice shelves Larsen A and B collapsed in 1995 and 2002 respectively. Regional warming probably played a role in their loss. But the same cannot be said for Larsen C’s latest iceberg.

Icebergs are produced naturally on healthy ice shelves. That’s because ice shelves continually receive an input of ice from glaciers that flow into them. The loss of ice in the form of icebergs usually balances the gain in ice from glaciers. In a BBC interview, Professor Helen Fricker of the Scripps Institute of Oceanography explained that ice shelves actually need to produce icebergs to maintain this balance.

The loss of this iceberg, which has reduced Larsen C’s size by 12%, will certainly change the landscape. In fact, it will reduce its size to the smallest it’s been since the last ice age. But this is not something to worry about. As Project MIDAS team leader Adrian Luckman says in a recent editorial, this iceberg cannot be connected to climate change. Indeed, it is just the product of a natural process.

This sentiment is echoed by Martin O’Leary, a Swansea University glaciologist, who said in a statement:

Although this is a natural event, and we’re not aware of any link to human-induced climate change, this puts the ice shelf in a very vulnerable position. This is the furthest back that the ice front has been in recorded history. We’re going to be watching very carefully for signs that the rest of the shelf is becoming unstable.

What might happen next? It’s hard to know. Dave Ashmore, glaciologist at the University of Liverpool, spoke to The Canary about the difficulty of predicting the future of Larsen C:

What this means for the remaining ice shelf is difficult to predict. Some research has shown that removing such a large piece of Larsen C may lead to a more unstable ice shelf over the next few decades, but it is possible that Larsen C will begin to advance and eventually look similar to how it did prior to this calving.

He also notes that the lack of data on the region makes it more complex to guess what will happen in the next few years. Further research is certainly needed to monitor the ice shelf’s development.

In other words, while we might not know exactly what the future has in store, one thing is clear. Larsen C is in the spotlight, and scientists will be watching with bated breath to see what happens down south.

– Read more about Environment from The Canary.

– Check out project MIDAS for more details about Larsen C.