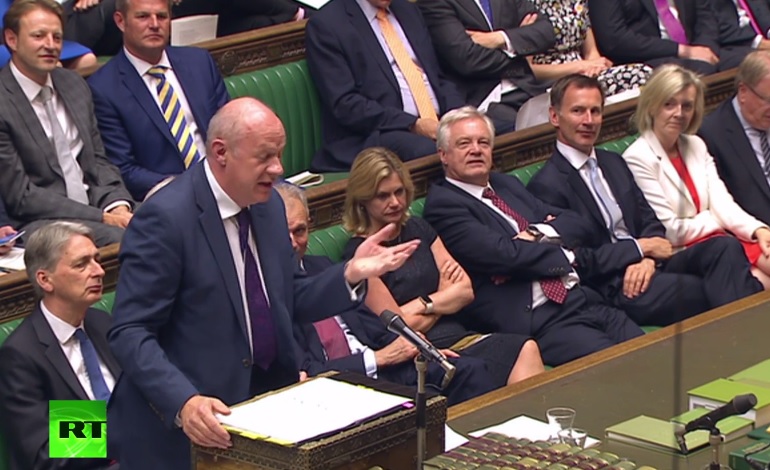 MP Damian Green stood in for Theresa May at Prime Minister’s Questions (PMQs) on 12 July. And in only 20 words, he managed to turn May’s no-show into the Tory Party’s worst nightmare. Because he revealed the real issue frustrating the party right now.

Namely, he illustrated that deposing May will not solve the party’s problems. Because it is the party itself – and the ideas it does or does not have – that is failing.

Emily Thornberry took Jeremy Corbyn’s place in the session. And she largely focused on the Brexit deal in her questions. Towards the end of PMQs, in response to one of Thornberry’s questions, Green attacked the Shadow Foreign Secretary. He said:

Frankly, she’s said nothing constructive that might contribute to a deal so far but I will give her another chance.

May, of course, faced ridicule earlier in the week for asking for policy ideas from opposition parties. Some Tory MPs even attacked her for it. But Green’s statement suggests he too believes Labour should be forming the government’s Brexit policy; and feels it’s his right to scold shadow ministers for not doing so. The groans of agreement from government benches also implied that many in his party agree.

It is, however, the government’s job to primarily form policy and develop strategy. Opposition parties, of course, play a role. But for the party of government – be it the Prime Minister, the First Secretary of State (Green), or those who voiced their support for Green’s statement from the benches – to vilify Labour for not doing the job it should be doing itself is extraordinary. And it shows how weak and lost the Tory party – not just May – truly is.

Green’s performance overall, however, showed why the government feels opposition input is essential.

Thornberry asked Green whether the government had rejected the idea of a ‘no deal’ outcome. She also asked the Secretary of State to publish the contingency plan for a ‘no deal’ Brexit, if one exists. And she pressed Green on the plan for the Irish border should his party not succeed in getting a deal.

Green essentially conceded that ‘no deal’ is still an option because it would be better than a “punishment deal”. But he didn’t acknowledge what ‘no deal’ looked like at all. In fact, in answer to Thornberry’s question about what a ‘no deal’ was, he spoke about the “good deal” his government is seeking.

And he offered the same non-specific response to Thornberry’s question about the Irish border. He claimed his party knows it’s important to “get that right” and “get the best deal for Britain”.

Green’s performance at PMQs was not unlike May’s. He used platitudes regularly, and avoided offering answers of substance that spoke to the core of the questions asked. Thornberry, however, argued that:

if the government seriously wants open, cross-party debate about the best way forward for Brexit, surely they have to spell out what all the options look like.

Not doing so makes it appear that the Tory government doesn’t know what those “options” are. And that’s seemingly the case regardless of who’s stationed at the PM’s lectern. But that is the role of government. And the people of this country deserve a party at the helm that is up to the task.