Labour's David Lammy has declared war on an 'out-of-touch' council. But there's a catch [IMAGES] - The Canary 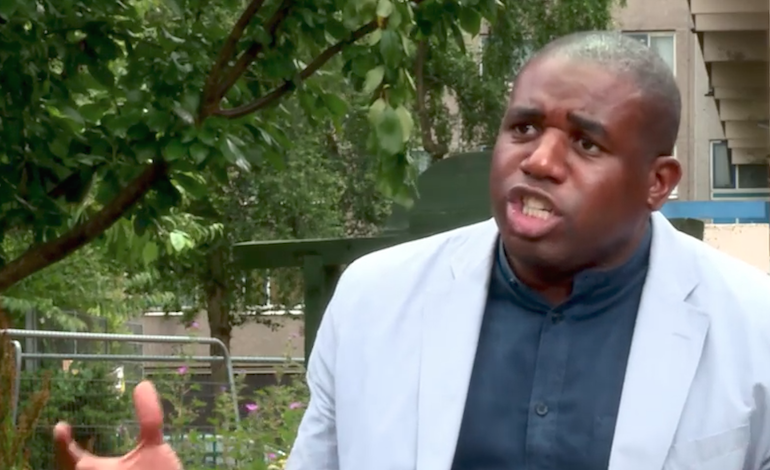 David Lammy has written to a London council over its plans for one of the largest privatisation deals in history. And his letter, calling the council “out-of-touch”, doesn’t mess around. But this story comes with a catch; as it’s a Progress Labour-led council Lammy has declared war on.

Haringey Council has proposed the so-called Haringey Development Vehicle (HDV) as a way of regenerating social housing and estates in the borough. The HDV is a 50/50 partnership between the council and private contractor Lendlease. It will see the demolition of existing council houses and property in order to build new homes and businesses. And the project is valued at around £2bn, making it one of the largest sales of public property in local government history. The council says of the plans:

We own a significant amount of land that can – and must – contribute to this growth. But lack the finance and skills to bring forward homes and jobs on that land at the scale, pace, and quality that is needed. Therefore, we have considered a range of options for bringing in finance and skills from a private sector partner, and have chosen an approach that achieves this goal while retaining a share of control – and a share of the proceeds – for the council

But critics argue that the HDV amounts to social cleansing. Local residents say they haven’t been consulted on the project; that the new properties won’t be social housing; that the HDV could bankrupt the council if it fails; and that Lendlease has a questionable reputation. And even the Labour members of Haringey Council are divided over the project. Labour councillor Stuart McNamara said:

If a venture like this failed the council would not have the financial reserves to bail itself out. It would also without doubt bankrupt the council and where will that leave tenants?

So Lammy has stepped in. He has already been vocal over his concerns about the scheme. But the strongly worded letter, sent to the Labour council’s leader Claire Kober, makes his position very clear.

Lammy says the Labour council is “out-of-touch” and “high-handed”. He also calls the HDV the “most controversial and contentious political issue” he’s seen in Tottenham since he was elected in 2000. And he says that the council has “failed to carry the community with it” throughout the project: 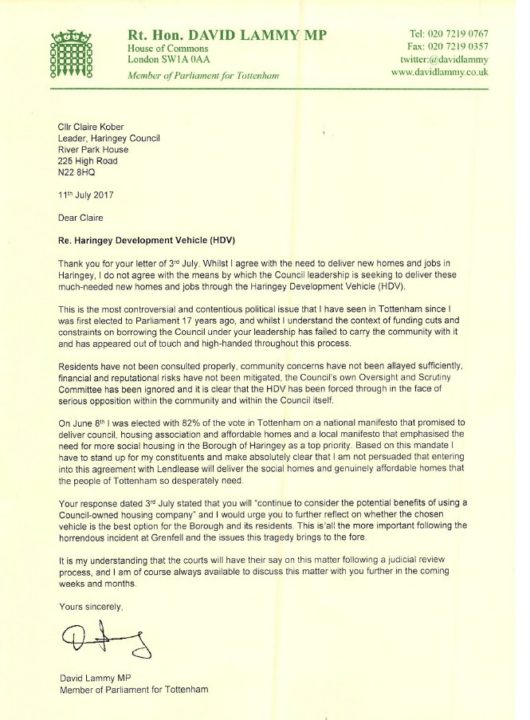 Haringey Council commented on the decision in a press release. On concerns about social cleansing, a council spokesperson told The Canary:

We have been clear that we intend to offer all HDV tenants affected by estate renewal a guaranteed right of return on equivalent terms if that is what they want.

The spokesperson also said the “policy on the rights of tenants when there is estate regeneration is currently out to consultation”. And they told The Canary that all council responses had met statutory requirements; that the decision has come after a long process with many detailed discussions since February 2015; and that they have answered many FOI requests and questions over proposed structure, legal framework and finances. They also said that regular updates will be made to all members of the council.

The situation in Haringey, and Lammy’s involvement, points to a deeper issue within the Labour Party. An issue of the disparity between Jeremy Corbyn’s democratic socialist vision and Labour-led local authorities’ often neoliberal, corporatist agendas. Because the actions of Haringey Council are not unusual. As the Architects for Social Housing (ASH) group has repeatedly pointed out, there are at least 170 council estates across London that Labour-led councils have demolished, or are in the process of doing so. And until this gap between local and national Labour is bridged, working class people will continue to be at the mercy of councils like Haringey; which, ultimately, may affect Corbyn’s performance nationally.

– Read more from The Canary on Housing and Social Cleansing.