Crowds have gathered around the world in defence of animals - Canary 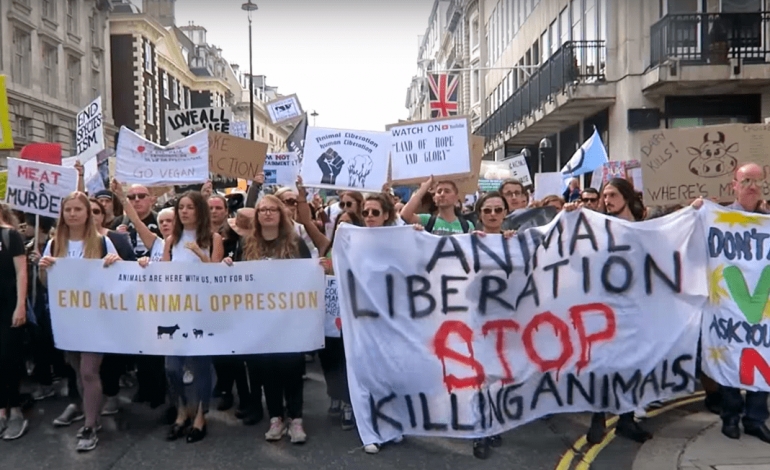 On Saturday, thousands of vegans attended the second annual Official Animal Rights March in London. Organised by the activist group Surge, the protest called for an end to all forms of animal oppression. Activists were seen carrying signs with messages such as “no excuse for animal abuse” and “animals are not commodities”. Similar marches also took place in New York, Los Angeles, Miami and Bucharest. One activist at the London march described the speeches (watch here and here) as “inspiring“.

The rising popularity of veganism

Last year, over 2,500 vegans attended the animal rights march. But this year, more than 5,000 people showed up, calling for the adoption of a plant-based diet. Ed Winters, co-founder of Surge, said:

To see this many vegans take to the streets is a humbling sign of the changing attitudes society is having towards the treatment of non-human animals.

As vegans, we stand against all forms of oppression, with no exceptions defined by species. It is time for society to understand that the life of an animal is worth far more than our taste buds.

As The Canary previously reported, the UK has seen a rise in veganism. The number of vegans in Britain has risen by 360% in 10 years. And options for vegans in the UK have been increasing, making it much easier to stick to a plant-based diet.

Documentaries have played a large role in increasing awareness about animal agriculture. Netflix films such as Forks Over Knives (2011) and What the Health (2017) make the health argument for veganism, while Cowspiracy (2014) details the devastating effects of animal agriculture on the environment.

Young people are driving the trend, due in large part to social media, which makes it easier than ever to spread the vegan message. The vegan hashtag is hugely popular, as are Instagram accounts promoting healthy living.

When prolific artists, athletes and celebrities praise the plant-based diet, this can also generate a surge in interest. High-profile Brits who have spoken about the benefits of veganism include JME, Akala, Ellie Goulding, David Haye and Jermain Defoe.

Many vegans have been left hopeful by the turn out at the march on Saturday. With twice as many people attending compared to last year, it shows that the trend of veganism is quickly rising. Also, with grime artists, boxers and bodybuilders refusing animal products, this may help to challenge stereotypes about the lifestyle. Every year, it seems to be becoming easier (and a bit more socially acceptable) to follow a vegan diet.