It's taken 60,000 refugees for the media to report on a genocide by a British-backed regime [VIDEO] - The Canary 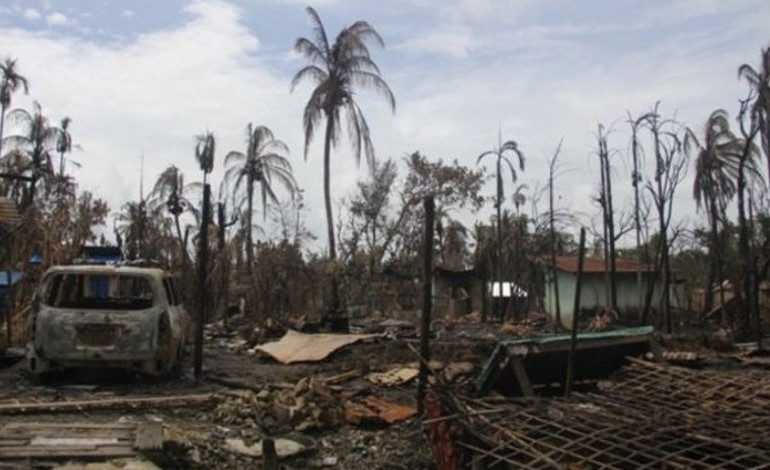 In a corner of south-east Asia, tens of thousands of men, women and children have reportedly been massacred, tortured or displaced. The alleged perpetrators are a sadistic military, legitimised by a Western-backed puppet regime. And it doesn’t help that the regime is supported by over 200 British companies.

Mainstream media outlets are finally reporting in detail on the apparent atrocities against the Rohingya people of Rakhine province in Myanmar (Burma). The Independent reports that around 60,000 Rohingya refugees have fled to Bangladesh in just one week, in the wake of advances by the military. The New York Times, meanwhile, reports on “methodical assaults on villages, with helicopters raining down fire on civilians and front-line troops cutting off families’ escape”.

But the news keeps getting worse:

Warning: readers may find the videos linked to below disturbing.

One testimony of such atrocities appears in a video that seemingly shows the beating of Rohingya men and the burning alive of a Rohingya woman. But this is apparently no exception. In one 2015 video, horrific footage emerged of Rohingya children allegedly burned to death. And there are many other videos showing such horrors.

Indeed, Rohingya people have suffered persecution for decades. And thousands more were reportedly tortured and massacred in May and June 2012.

Even those who flee as refugees are seemingly targeted. Many people, for example, use makeshift boats to reach what they believe is safety in neighbouring Bangladesh. But such a journey is perilous, as this video shows:

Aerial footage recorded on 31 August 2017 by Human Rights Watch shows that around 700 buildings in one Rohingya village alone were destroyed: 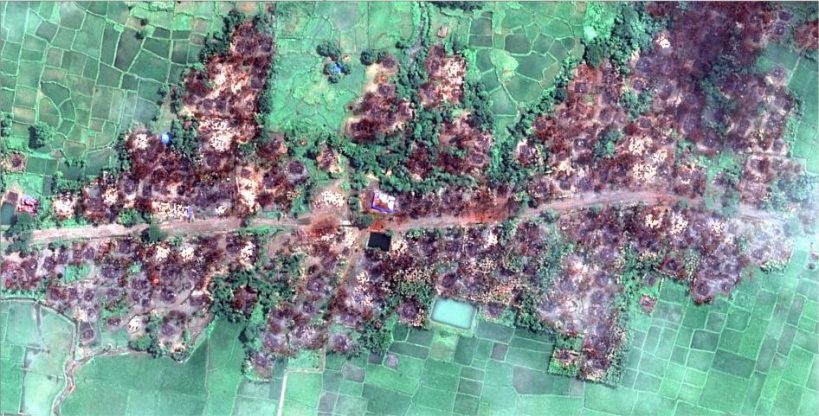 This new satellite imagery shows the total destruction of a Muslim village, and prompts serious concerns that the level of devastation in northern Rakhine State may be far worse than originally thought… Yet this is only one of 17 sites that we’ve located where burnings have taken place.

The destruction of the other sites all reportedly took place in the last week of August 2017.

Following years of persecution and massacres, a militia called the Arakan Rohingya Salvation Army (ARSA) has formed. And on 17 August 2017, around 1,000 ARSA insurgents reportedly attacked between 25 and 30 police and military posts across the townships of Maungdaw and Buthidaung.

But the Myanmar military apparently regards the ARSA as just an excuse to step up its own violence. As author Francis Wade, who has written about the Rohingya people, has said:

What’s happening in Myanmar can be dressed up as [a] counter-insurgency campaign, but in design and purpose, it’s a pogrom and has popular support.

In an open letter to the UN Security Council in 2016, Nobel Peace Prize laureates slammed “a human tragedy amounting to ethnic cleansing and crimes against humanity”. Desmond Tutu, Malala Yousafzai, and others said that “some international experts have warned of the potential for genocide”.

My statement on the #Rohingya crisis in Myanmar: pic.twitter.com/1Pj5U3VdDK

Earlier this year, a Human Rights Watch report described how the military took part in rape and sexual assaults on Rohingya women and girls in at least nine villages. A report by the UN Office of the High Commissioner for Human Rights concluded that these attacks against the Rohingya “very likely” amounted to crimes against humanity. And an Amnesty International report agreed.

Meanwhile, the British Chamber of Commerce Myanmar boasts high-profile sponsors and over 230 member companies, including Shell, Unilever, Prudential, and the Standard Chartered banking group. By doing business with a military regime apparently bent on ethnic cleansing, they are essentially showing their support. But if they threatened to withdraw that support, they could make a difference.

The world must not remain silent.

– If you’re a customer of any of the companies operating in Myanmar, write to them to express your concern about the ongoing crisis.

– Read more on Myanmar and the Rohingya crisis from The Canary, Amnesty International and Human Rights Watch.