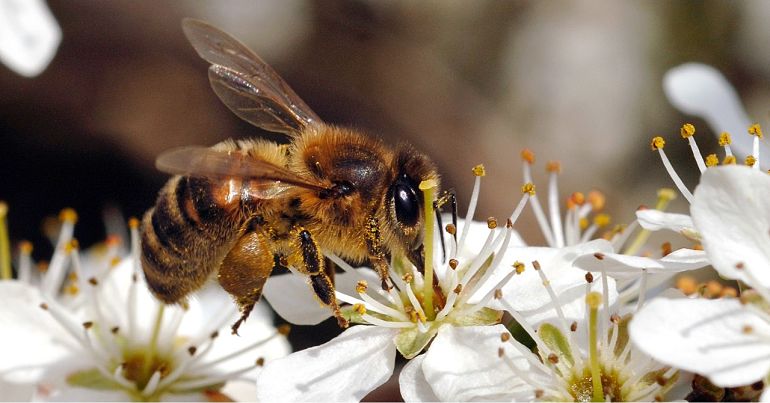 Potentially harmful insecticides known as neonicotinoids (neonics) could be made safer for honeybees and bumblebees, thanks to the latest research.

Bees are essential to food production because they pollinate plants. Without them we would lose many of our crops as well as wild plants and trees. But crops can also be attacked by other insects, leading farmers to treat them with chemicals for protection.

Scientists found two enzymes – one in honeybees and one in bumblebees – that make them immune to some neonics. It’s in their genes to be able to safely metabolise these individual chemicals.

The work was published on 22 March in Current Biology. Rothamsted Research, the University of Exeter, and Bayer AG collaborated on the project.

Some neonicotinoids are highly toxic to bees but others have a very low acute toxicity… Each insecticide needs to be considered on its own risks and merits.

New insecticides could be screened to determine their potential toxicity to bees thanks to this discovery.

The ban on neonics

The EU introduced restrictions on the use of neonics in 2013.

The UK government initially opposed the ban, saying that there was not enough evidence that the chemicals were harming bees. But it was nevertheless introduced and then extended in 2017.

The ban was always meant to be temporary; we are effectively conducting a Europe-wide experiment. The latest research has shown that bee populations are impacted by this class of insecticides. So the EU is asking whether removing neonics from the environment will slow the decline of bees.

The European Food Safety Authority is considering a further extension to the ban. Scientists at Rothamsted condemned this proposal. They think that it is too “broad brush”. Banning a whole class of insecticides is asking for future food security issues, they say.

Large scale organic farming may not be better for natural pest control than non-organic farming, according to research. But monocultures – growing endless acres of just one crop – aren’t great for wildlife and are more common in modern farming.

The global population is set to reach nine billion by 2050. At the moment, we couldn’t produce enough food for that many people. It is a huge challenge to find sustainable ways to bring healthy, nutritious, safe food to everyone. And that is before we consider socioeconomic factors that affect the availability of food.

We have to protect crops from pests and disease or we will continue to lose about 25% of yield. But we must protect the environment as well. That means exploring the full range of systems, including smaller scale, hyper-local production. We have to find out what serves us and the environment best.

The EU may be throwing the baby out with the bathwater. It could be better to explore how to make neonicotinoid insecticides safer. Or the ban may force the hands of big agricultural companies like Bayer AG, ensuring that they invest in more environmentally friendly alternatives. Only time will tell.