54 years since this Tory campaign poster, the Conservative Party proves it hasn’t changed a bit - Canary 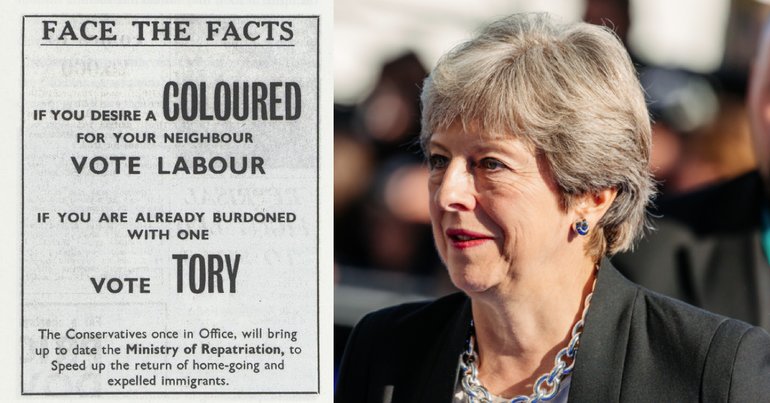 A newsletter issued by a local Conservative Action Team has brought back some of the worst memories of race-baiting by the party. The leaflet targets Labour’s London mayor Sadiq Khan and Labour leader Jeremy Corbyn with barely veiled racist dog-whistles.

Hey @theresa_may – what it is the Tories in Havering want ppl to be worried about? See if you can work out the subliminal message here? pic.twitter.com/9tXihUejBp

The newsletter screams “Havering in danger!”, and warns that “Mayor Khan and Corbyn’s men are desperate to grab power in our town hall”. This, they say, would mean “Romford will increasingly become like an inner city area”. Subtext: this area will become less white.

In case that subtext was missed, the bullet point list of potential outcomes hammers the message home. Particularly the final three:

As word of the newsletter spread, voters made their feelings known:

Even by @Conservatives standards this is rather appalling. Does this have your blessing @theresa_may? #Havering pic.twitter.com/1pAnaeo8Wi

Romford Conservatives descending into the gutter to hold onto their ‘privileges’ Labour will bring transparency and openness to Havering Council affairs. https://t.co/OzAmWkGnd9

This comes after Conservative MP Zac Goldsmith’s mayoral campaign against Khan, which was littered with dog-whistle racism.

Goldsmith also wrote a piece for those known race-baiters at the Daily Mail, linking Khan to the 7/7 terrorist attacks. The piece was so overtly racist and unbefitting of a candidate for political office that it provoked an immediate and angry response from Conservative peer Baroness Warsi.

Both campaigns hold overtones of the campaign for Smethwick during the 1964 general election – dubbed the most racist episode in British electoral history. Conservative candidate Peter Griffiths ran on the campaign slogan: If you want a n*gger for a neighbour, vote Labour.

The modern equivalent of THIS. Read this. This is who they ARE. For once May was right. Nothing has changed pic.twitter.com/vebDJQIjZc

I would not condemn any man who said that, I regard it as a manifestation of popular feeling.

The saddest part of this piece of history is that Griffiths won. Despite wide Labour gains around the country, Smethwick swang sharply to the Conservatives and Griffiths secured victory. As Labour’s defeated incumbent Patrick Gordon Walker left the hall, Tory supporters jeered:

Over half a century later, it looks like Conservatives are still race-baiting to win elections. And they should be held accountable for their tactics. But they are not responsible for the choice of individual voters to allow such prejudices to fester in their own hearts. That’s the good news. Because Britain doesn’t have to wait for the Conservative Party to change or be voted out to make this stop. We can each choose to make this change happen ourselves, right now.