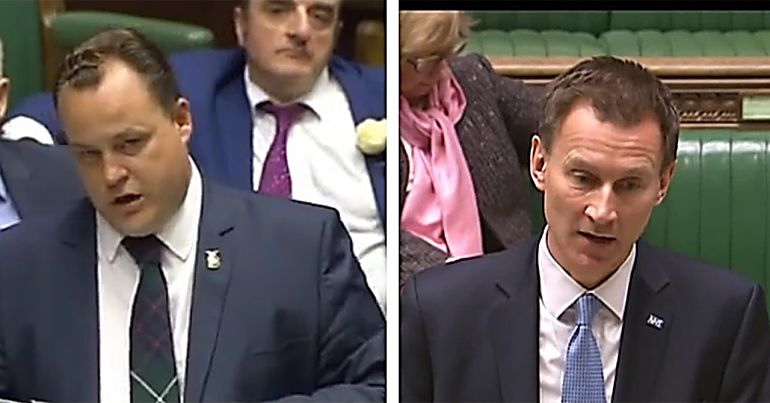 During a debate in parliament, Hunt claimed NHS privatisation “is not happening”. So the SNP’s Chris Stephens schooled the health secretary on what privatisation actually is, using a definition from the world’s highest health authority.

The Labour Party called an Opposition Day debate in parliament on 23 May to debate “outsourcing and privatisation in the NHS”. It was seeking the publication of government papers, including minutes and discussions, on the issue.

I am afraid that it is a transparent attempt to set hares running about NHS privatisation that is not happening.

To support his claim, Hunt detailed alleged communication he’d had with officials. He said he’d asked officials what documents ministers hold on privatisation and got the following reply:

Officials have, since the Humble Address was received, sought to find submissions about the privatisation of clinical or patient services within the period specified, but to this point none have been identified. Her Majesty’s Government has no plans to privatise the NHS.

I want to make some observations about privatisation and outsourcing in particular. I think that I should start off with the World Health Organisation’s definition of privatisation: ‘a process in which non-government actors become increasingly involved in the financing and provision of health care, and/or a process in which market forces are introduced in the public sector’.

This is exactly what the Conservatives have done with the NHS. As Jeremy Corbyn pointed out in prime minister’s questions (PMQs) on 23 May, private companies currently hold contracts worth £9bn a year for provision of health care. And through its 2012 Health and Social Care Act, the government turbo-charged market forces in the public sector. Because the act guaranteed the competitive tendering of contracts.

So, according to the UN’s own health authority, privatisation is definitely happening in the NHS.

But Hunt didn’t appear to want facts to get in his way in the debate. He even accused Labour of spreading a “creation myth” about the NHS, asserting that it was in fact a Conservative minister, Henry Willink, who first proposed setting up the NHS. Although Hunt did credit Nye Bevan with “delivering that Conservative dream”.

Labour’s Jonathan Ashworth, however, scuppered Hunt’s argument with some pesky facts. He reminded the health secretary that his party “voted against the creation of the NHS 20-odd times”.

It’s a sad state of affairs when the UK’s health secretary plays fast and loose with the truth about the NHS. It’s almost like Hunt sees discussion on this issue as some sort of game. But there’s nothing entertaining about the Conservatives’ systematic destruction of our health service. Nothing at all.