Jeremy Hunt made the most bizarre request of his career, and it's one he'll live to regret - Canary 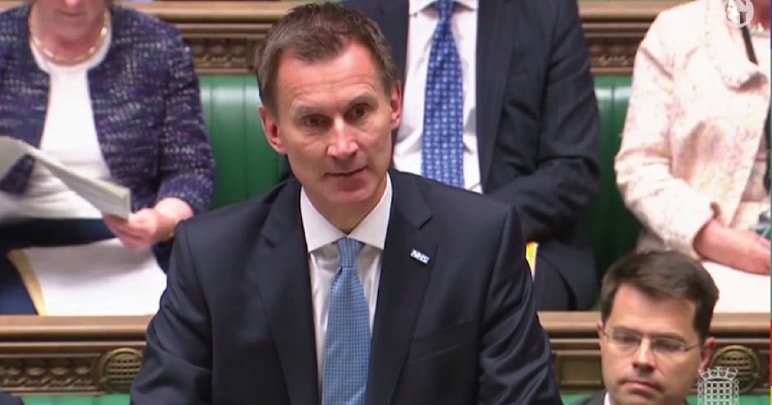 Jeremy Hunt has now become the UK’s longest-serving health secretary. In an interview with the Guardian, he spoke about his time in the role. The most brazen comment he made was the suggestion that people should “judge me by my results”. Which is quite a remarkable thing to say, given that his time in office is marked by constant failure.

Hunt was asked what he’d tell the many critics who say the NHS isn’t safe in his hands. He said:

I would say: judge me by my results. What I want is a strong NHS delivering the highest standards of care anywhere in the world and that is true to the founding values of the NHS, and I hope that looking back on my time as health secretary people can see that actually the foundations for that change were laid in the period that I was health secretary.

Already, you can see Hunt lining up his future spin. By talking about “foundations for… change”, Hunt is angling to take credit for whoever fixes his mess. But if you look at his record, it’s clear that the Hunt model needs ripping up and starting again.

How has this master of incompetence kept his job?

Madders also pointed to some of Hunt’s ‘results‘ since he took the job in 2012:

Another thing people accuse Hunt of is trying to privatise the NHS. He is, after all, the man who co-authored a book about replacing the NHS with private insurance.

Although the NHS is still free at the point of service in most instances, Hunt has faced legal action over plans to “Americanise” the service.

Before his death, Prof Stephen Hawking was involved in the legal action against Hunt. He said:

Crucially, Hunt is incredibly unpopular with the people who serve under him. There have been strikes by junior doctors who face “unsafe” working conditions; a “haemorrhaging” of nurses, and instances of staff “quitting to work in supermarkets” due to poor pay.

Hunt had this to say when he became the longest-serving health secretary:

Sometimes time has flown, at others it’s been achingly slow, but every second of last 5+ yrs has been a privilege. Thanks #NHS for being extraordinary in so many ways: much more impressive than a long serving Health Sec are the staff who have devoted 10, 15 or 20+ yrs to patients

Health professionals had a different take:

In case you wondered why @Jeremy_Hunt still has his job despite the worst tenure in history: he's effectively underfunded, downsized, outsourced and fragmented the NHS as asked. https://t.co/qqCaN2wrmZ

As one of my dear doctor friends said earlier on Jeremy Hunt’s “legacy” as longest-serving health secretary:

Asked to respond to critics who fear the #NHS is not safe in his hands, Hunt said: “I would say: judge me by my results." That is exactly what we are doing, and why we are so worried about the future of #ourNHS #NHS70 https://t.co/bz6E4x7sSO

Jeremy Hunt becomes longest-serving health secretary in NHS history. In my 23 years working in the #NHS, I’ve never known the system to be in such a perilous state. That is the legacy of Tory governance of the NHS

Hunt’s legacy also includes a habit of saying things that are at best misleading and at worst not true. In his time in office, Hunt has:

Hunt also supported plans for “a proper 7-day service” on the basis that 6,000 people died every year without it. He claimed this before the study claiming this had even been made public – a move deemed inappropriate by the Code of Practice for Official Statistics.

A report from the British Medical Journal later ‘rubbished’ the claims of 6,000 deaths, and said Hunt was guilty of “extreme political arrogance” or steps to “destabilise the NHS”.

Hunt isn’t laying the seeds for the NHS to grow; he’s poisoning the land so no one can complain when he sells it off cheap.

The only sensible thing he’s done in his career is ask people to judge him on his record. Because we should judge him on the things he’s done. And in future, we should hold him up as an example of how not to run the NHS.