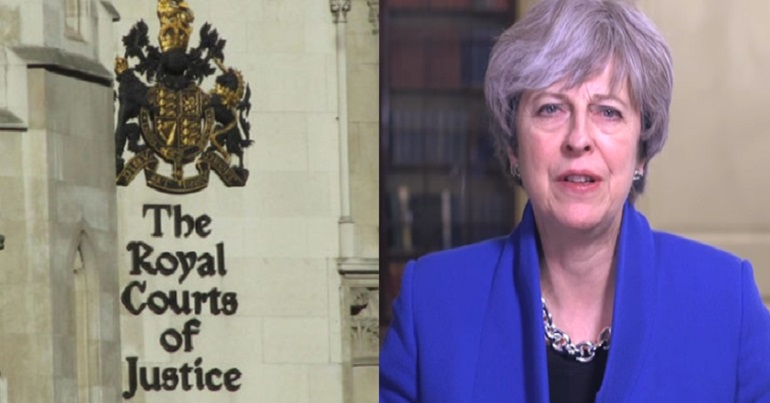 A campaigning charity has made a call to action. It’s for people to get involved with its lawsuit against the UK government over climate change.

Plan B is a charity which supports legal action to tackle climate change. The group has previously warned the government that it believes it’s breaching its obligations under the Climate Change Act 2008, and specifically its carbon target for 2050. But the government has ignored Plan B’s requests. So, the charity launched [doc] a bid for a judicial review of the government’s actions. Things are gathering pace, with a hearing at the Royal Courts of Justice on 4 July.

As The Canary previously reported, Plan B has already got the support of outgoing Green Party leader Caroline Lucas. But now it wants everyone to have the chance to be involved. It’s organised an event at SOAS University of London, on Saturday 16 June. The free two-hour meeting will include Plan B explaining its case against the government, followed by:

a brief explanation of how you can get involved, show your support and spread the word with the opportunity to network with us, other climate groups and interested people.

When you look at the detail of Plan B’s case, it’s clear just why it considers the government’s action on climate change a ‘failure’.

Plan B’s lawyers, Bindmans LLP, sent a letter [doc] to the government. It highlights [doc] the:

failure of the Government to revise the UK carbon target to keep pace with… the Paris Agreement the Government has done so much to promote. If the UK, as… a self-proclaimed climate leader, fails to meet its international obligations… its leadership claim is false and its good influence on others is lost.

Bindmans specifically noted [doc, p14] the government’s Committee on Climate Change’s analysis of the Paris Agreement and its implications for the 2050 target. It stated that the agreement’s aim, “to limit warming to well below 2°C and to pursue efforts to limit it to 1.5°C” went further than the current 2050 target. The Committee also said [doc, p14/15] that:

the UK’s current emissions targets are not aimed at limiting global temperature to as low a level as in the [Paris] Agreement, nor do they stretch as far into the future.

It is this weak response to the Paris agreement which is central to Plan B’s case. A spokesperson for the group told The Canary:

The political project to avoid cascading, self-reinforcing changes to our climate system is failing. Following in the footsteps of other successful climate lawsuits around the world, we are using the law as a tool to bring about the transition we need to avoid catastrophic tipping points.

But the government disagrees. A spokesperson for the Department for Business, Energy and Industrial Strategy previously told The Canary:

The UK is a global leader in tackling climate change – we were the first country to introduce domestic legally binding emission reduction targets and played a vital role in securing the historic Paris Agreement. Since 1990, we have cut emissions by more than 40 per cent while growing our economy by two thirds. This means we lead the G7 nations on clean growth.

As well as Plan B, another group has brought repeated legal actions against the government. Legal campaign group ClientEarth took the government to court on three occasions over air pollution. In the most recent case, a judge ruled that the government can be brought back to court as many times as needed until it starts acting within the law.

It’s a damning indictment of a government when campaigners repeatedly take it to court. But it’s even worse when, judging by Plan B’s account, the government seems unwilling to shift its position. Another court case may be the only way Theresa May’s government will take its climate obligations seriously. Which is why it’s so important that people get involved with it.