A thinktank is finally challenged over its funding on Question Time. But why was it ever given a platform? - Canary 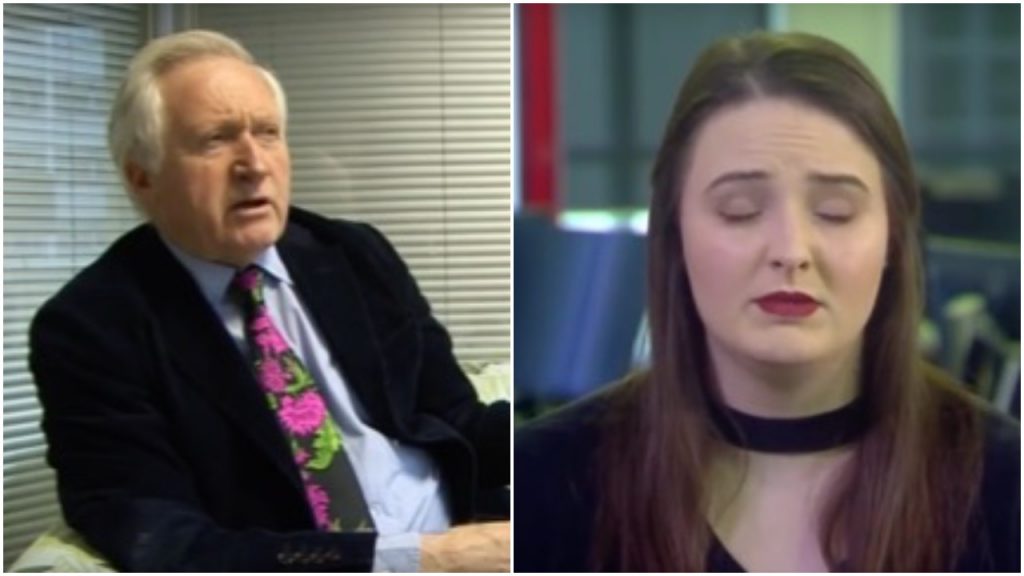 But the bigger question remains: why are IEA representatives invited on the BBC in the first place?

In a segment discussing the alleged financial wrongdoing of arch Brexit advocate, Arron Banks, Dimbleby turned his focus to Andrews and the IEA:

It's about time David Dimbleby asked the propagandists from the IEA where they get their funding from. Moreover, why does an organisation with no financial transparency get gifted a platform on #bbcqt by our public broadcaster? No transparency = No platform. pic.twitter.com/biBJdVIjLR

Do you think it’s an important issue whether Arron Banks got 8 million pounds worth of money from abroad, which he shouldn’t have taken? I mean, you at the IEA are under the same, you know, Charity Commission looking at the money you get, whether you get it fairly. Is it important where money comes for these kind of activities?

Of course it’s very important that everybody obeys the law.

Andrews’ answer arguably related to the IEA as much as Arron Banks.

As Greenpeace argued in its Unearthed investigation, the IEA is:

registered as an educational charity, [but] does not disclose its donors, arguing that it is under no moral or legal obligation to do so.

So when Andrews states it’s important that “everybody obeys the law” is she really saying ‘we at the IEA do obey the law, but we don’t have to disclose our funding’?

Whether this is morally acceptable is another matter. As is whether the BBC, as a public broadcaster, should consistently provide such organisations with a prominent platform.

Interestingly, the IEA’s website’s write-up of Andrews’ appearance did not include her answer regarding the IEA’s funding, or Arron Banks: 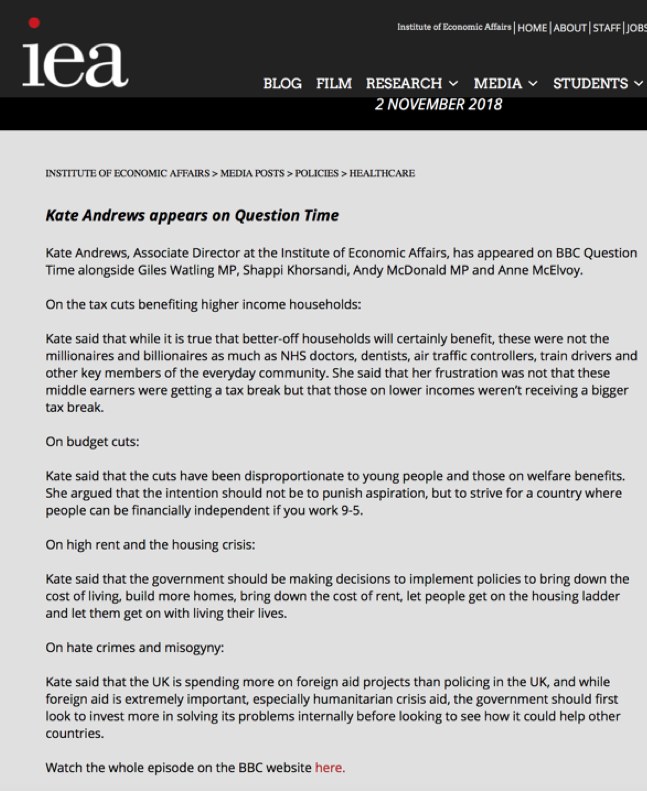 As financially transparent as a brick wall

In a report by the transparency advocates, Transparify, the IEA was deemed to be a “highly opaque” as they:

take money from hidden hands behind closed doors…in their quest to shape public debates and influence politics and policies in the country.

Transparify’s chart shows how the IEA relates to other organisations: 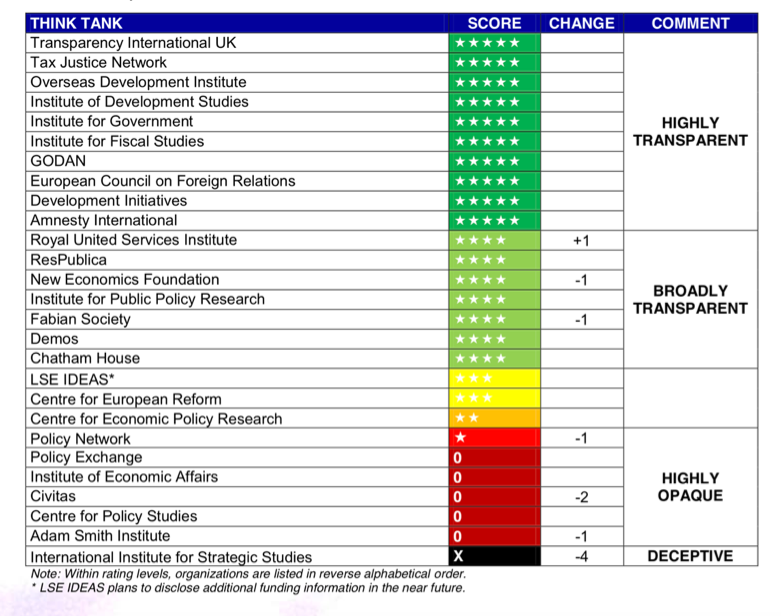 Dimbleby was right to call-out the vile personal abuse that Andrews is subjected to online. But there was an unmissable irony when he spoke of people hiding behind “anonymity”:

The IRONY of Dimbleby expressing disgust at "people hiding under a cloak of anonymity" in support of @bbcquestiontime regular @KateAndrs whose IEA paymasters HIDE UNDER A CLOAK OF ANONYMITY! #BBCQT #CorporateLobbyists #Transparency https://t.co/ih84EhJOfY

But we do know some of their donors…

However, reports have revealed some IEA donors. As the following video by Unearthed shows, one of its donors is BP:

And as the Guardian reported in 2013, the IEA has received money from tobacco companies and also, more recently, gambling companies.

Undercover at the IEA

During its undercover report, the Guardian and Unearthed filmed the IEA’s head, Mark Littlewood. He claimed that commercial donors could shape the “content” and “salience” of their commissioned research.

But in 2016, the Charity Commission stated that the IEA’s trustees had assured them that research sponsorship only came from:

individuals or trusts who do not have a vested or commercial interest in the topic … [and] the sponsorship only goes as far as suggesting topics, not the contents of the paper.

[T]he trustees take considerable efforts to ensure that whatever the source of funding, IEA’s research is independent.

This is significant, as its advantageous tax status as an educational charity is conditional on the stipulation that:

an organisation will not be charitable if its purposes are political.

And must inform the public:

in a neutral and balanced way.

But it must be stressed that Littlewood states that funders of research could not change research “conclusions”. This is shown here when he discusses the IEA’s relationship with the alcohol industry:

Watch Mark Littlewood talk about how the IEA would take money from alcohol companies. Last year they wrote about how taxes on alcohol are too high… and did not disclose how this paper was funded https://t.co/1Mvbn8bciw #IEAtapes pic.twitter.com/3fk2cNVt5x

Yet, despite charitable status being conditional on not being “political”, Littlewood was also filmed claiming IEA staff have influenced government Brexit policy:

Mark Littlewood Head of the IEA speaking to an undercover reporter exposes and contradicts Shanker Singham's claim on #Newsnight that the IEA does not influence the Brexit process, as a lie – Disgusted RTpic.twitter.com/lZltf6kBRT

The IEA has previously responded to these stories with a statement available here. It made no apology and stated:

Comments referred to in this account are selective and taken out of context of a wider conversation.

But as the Guardian reported in July 2018, the IEA is now facing two investigations.

Firstly, for regulatory compliance by the Charities Commission reviewing its educational charity status.

Secondly, by the Whitehall lobbying tsar to determine if the IEA should register as a lobbyist. This would mean listing its clients and contact with government officials.

How effective these investigations will be, based on historical precedent, is questionable. In 2013, the National Audit Office (NAO) deemed the Charity Commission “too passive” and concluded:

the Commission does not do enough to identify and tackle abuse of charitable status.

A former Charity Commission board member, Andrew Purkis, has written at length on how the commission previously, in his words “undermined itself over the IEA”.

Dear BBC: why is she invited?

Judging by its online output, the IEA clearly think an appearance on Question Time is a publicity coup:

? The Institute of Economic Affairs' @KateAndrs will be on your TV screens at 10:45 PM over on BBC One, you can follow along the debate using the hashtag #BBCQT! pic.twitter.com/f81ZEVD6CZ 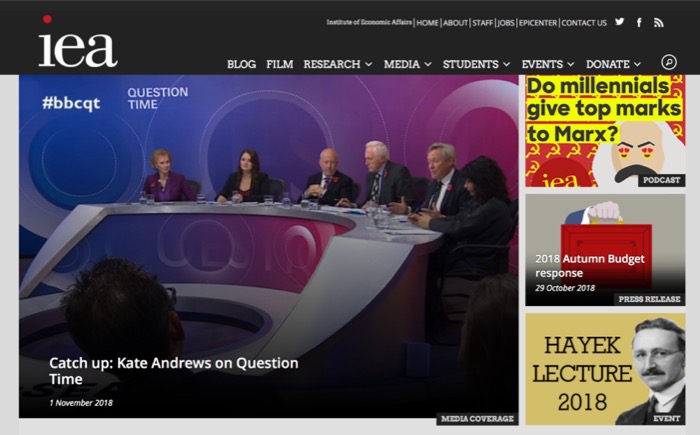 But this is not a rare occurrence.

A search of the BBC‘s online search engine shows that between the November 2015 to 2018, Andrews has appeared on Question Time five times. And between October 2011 to February 2017, Littlewood appeared five times.

A cursory search of these names and ‘IEA’ on the BBC website, yields countless hits. They show the IEA on shows like The Daily Politics, This Week, BBC News, The Andrew Marr Show, Any Questions, Arts and Ideas and numerous others.

Dr Tom Mills, author of The BBC: Myth of a Public Service, believes that “trust” in the BBC’s output is at stake over this issue:

The BBC has a special duty not only to ensure that a broad range of voices are able to contribute towards public debate, but also that those that do participate are open about the interests they represent. Indeed, one of the founding principles of the BBC is that as a national broadcaster it should operate as a public service, free from political interference or commercial interests.

And therefore it should:

only grant access to its programmes representatives of organisations which are totally transparent about their sources of funding, and should maintain an accessible and user-friendly register allowing its audiences to easily check up on any ‘pundits’ appearing in BBC programmes.

The Canary offered the BBC the opportunity to comment on these issues. It stated:

The BBC mentions the funders of think tanks when it is relevant to the story or report in question and would challenge them on this if there is an apparent conflict of interest. The BBC aims to state the general political stance of think tanks to help audiences better understand the context in which they’re speaking but it’s not practical to list every single funder of a think tank every time we introduce a spokesperson on air.

But as Mills told The Canary:

No one is suggesting that the BBC should list every think tank donor when they introduce a spokesperson on television or radio, and simply stating the general political outlook of a think tank, as is customary, is not sufficient. This is about identifying and highlighting potentially relevant conflicts of interest. The BBC will be unable to make a judgement as to whether the funders of a think tank are relevant to a story or a report if a think tank does not disclose the identity of all its donors. This is precisely why transparency is so crucial, and why the BBC should not be giving a platform to any think tank that fails to meet this basic democratic standard, whatever their political orientation. The BBC, as a public service organisation, should be taking this issue much more seriously.

Dimbleby’s raising of IEA funding is welcome. But until the IEA embrace transparency, Andrews and the IEA should not be gifted BBC prime time to influence our politics.

Moreover, the IEA should be stripped of its educational charity status and reclassified as the corporate propaganda lobbyist it really is.

– Take Action and complain to the BBC about this issue