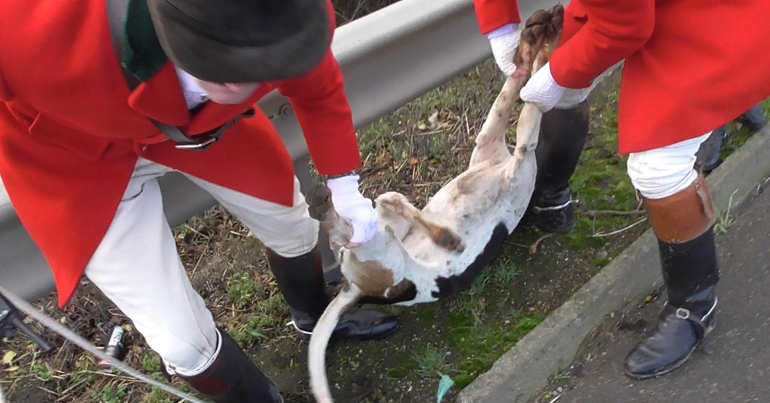 The Canary reported on a Fitzwilliam Hunt hound that was killed after being hit by a car on 8 December. This incident made headlines nationwide. But it could be the final blow in a series of damaging stories about the hunt. Just days before, the Fitzwilliam Hunt had quietly admitted defeat in a legal battle against anti-hunting activists.

On 16 October, the Fitzwilliam Hunt took an unprecedented step in trying to squash anti-hunting protest by applying for an injunction. This prevented named individuals and groups – and “persons unknown” – from entering land owned by the hunt’s joint master, Philip Naylor-Leyland.

It was widely reported that on 19 November, a judge granted a temporary and reduced version until a court case in 2019. But less widely reported was a U-turn made by the Fitzwilliam Hunt in a move that activists called a “defeat” for the hunt.

The hunt wrote to us (via our lawyer) and offered to drop proceedings against us if we signed a voluntary agreement we would not trespass on their land. What we get from that is that our names are no longer part of the ‘proceedings’, and as such there is now no possibility that we will have to pay losing side court costs.

… Named sabs have undertaken an agreement not to trespass on Fitzwilliam Hunt land.

And the spokesperson added that:

What the hunt get out of that agreement is that now the named people are dropped from the court case, they aren’t going to have to stand up and answer questions on our evidence of illegal hunting in the high court. … There is still an injunction against persons unknown, however that is a civil ruling not a police issue.

The statement claimed the case had cost the hunt “around £120,000” up to that point. As a result, the saboteurs viewed the “diminishing returns” agreement as a victory.

The Canary approached the Fitzwilliam Hunt for comment on these claims. A response, issued by the Countryside Alliance, confirmed the facts of the settlement and went on to say:

Rather than risk a costs order against them, nine of the named defendants have agreed a settlement whereby they have signed voluntary undertakings to the Court confirming that they will not at any time trespass on the Claimants’ land, with immediate effect. … This settlement was offered by the claimants in order to reduce the cost to the parties generally.

And regarding claims of illegal hunting, the statement said:

During the course of the interim proceedings, the saboteurs alleged breaches of the Hunting Act 2004, for the avoidance of doubt, these allegations are denied by the Hunt.

The case will continue against “persons unknown”.

The Fitzwilliam Hunt appears to be growing a negative public reputation due to its associations with violent and illegal activities. In August, a supporter of the hunt was convicted of assault and criminal damage after attacking North Cambs Hunt Sabs. And in April, the hunt was found guilty of breaching the Hunting Act. Meanwhile, in December 2017, footage emerged of local residents in Upwood angered by “appalling” behaviour by the hunt in their village.

The presence of saboteurs was essential in exposing these incidents to the public. It’s perhaps no surprise, then, that the hunt has tried to prevent activists from monitoring its activities.

When a hound was hit and killed on the A14 on 8 December, just nine days after the out-of-court settlement, saboteurs were present yet again to document and publicise the hunt’s shocking actions. Naylor-Leyland and the Fitzwilliam Hunt have just spent an alleged £120,000 trying to prevent this type of publicity. They must have been fuming.