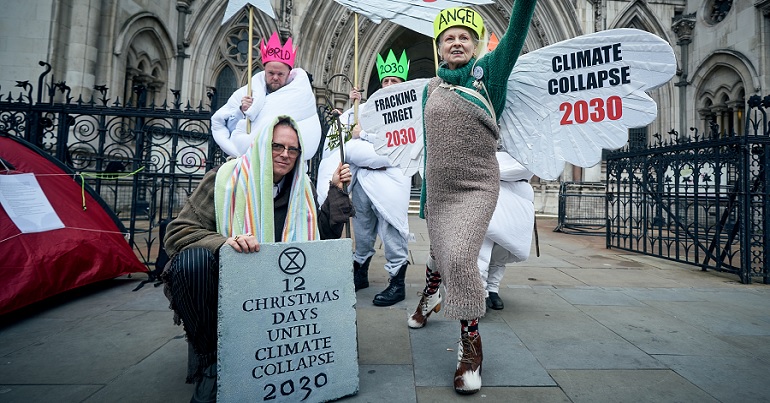 The first case against the government’s national fracking policy has begun in the High Court. The aim is to challenge the very arguments the government makes in support of the industry. But it’s being brought by mother and son fashion designers.

The campaign group Talk Fracking is led by fashion designer Joe Corré. It’s currently in court applying for a judicial review of the government’s fracking policy. The case is based around the fact that Corré and Talk Fracking question the legality of certain policy decisions the government has taken. It began on Tuesday 18 December, along with a challenge from Friends of the Earth. The High Court is hearing the cases together as they are both challenging one specific area.

Outside the court on 18 December, Corré, along with his mother Vivienne Westwood and other campaigners, staged a demo. They recreated the Nativity, but in the context of fracking: 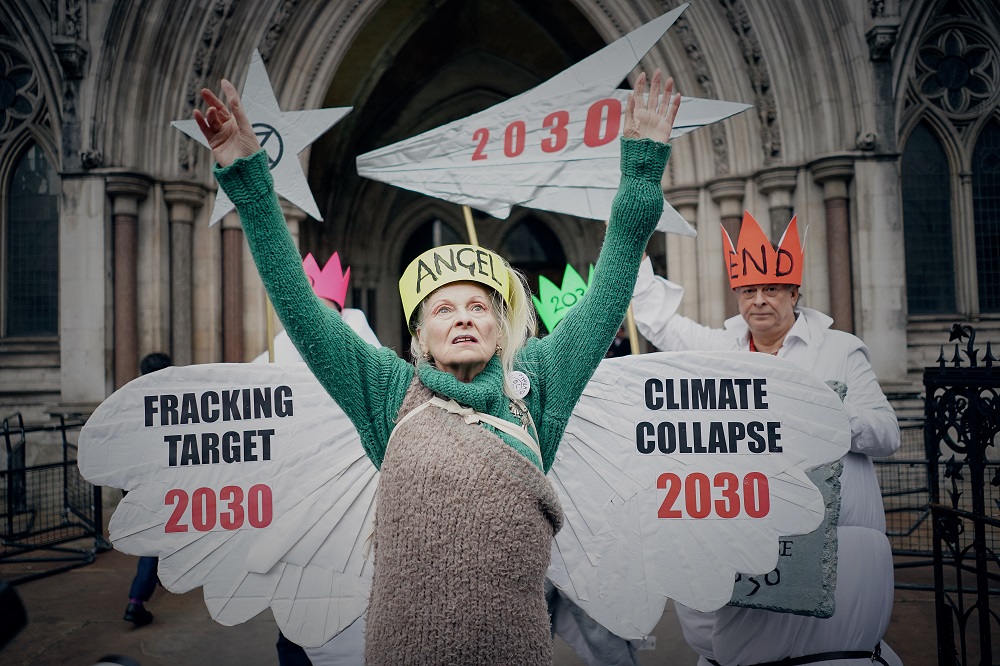 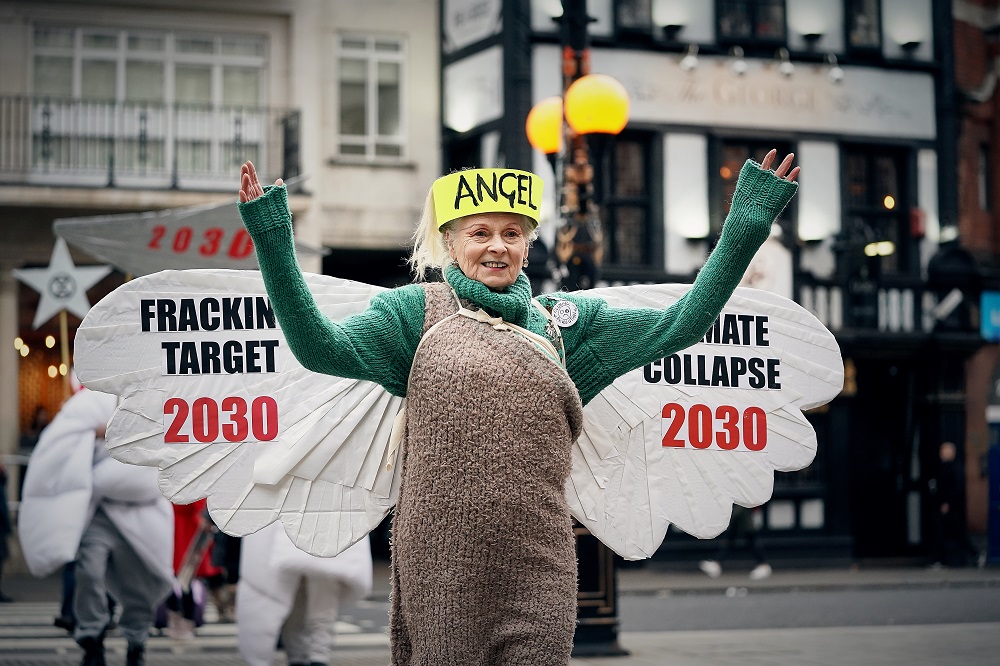 They were also highlighting that there are only 12 Christmases until climate breakdown could be too late to stop. This is based on the Intergovernmental Panel on Climate Change (IPCC) which said that unless global warming is got under control by 2030, then the consequences could be dire: 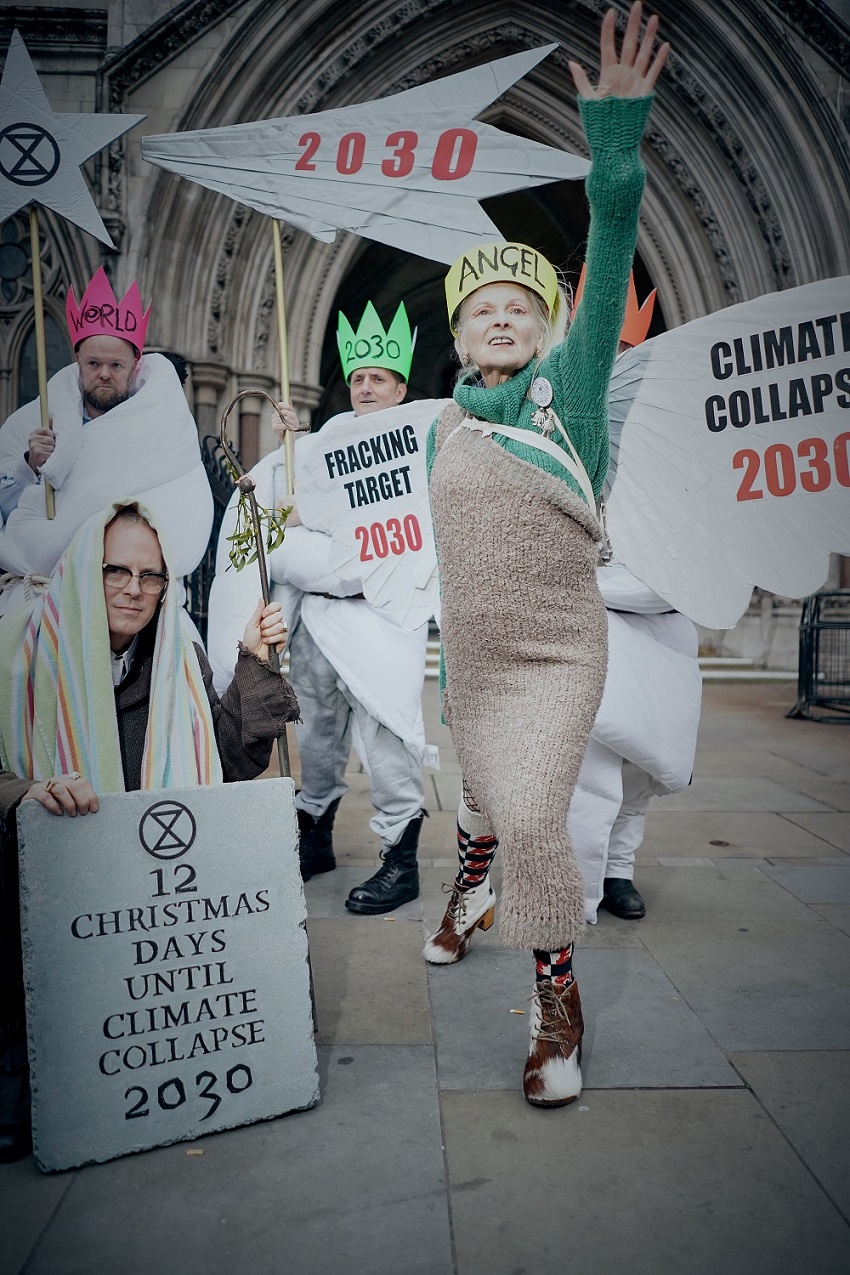 Westwood said in a statement for The Canary:

But the heart of the case is ultimately whether fracking should even take place at all.

The government says fracking could give the UK “greater energy security, economic growth and jobs”. It claims it’s “encouraging” companies to explore fracking in a “safe and environmentally sound” way.

But the industry is very controversial. Along with its contribution to greenhouse gas emissions, it has been linked to polluted drinking water. Studies have also shown links to low birth weights, premature births and a possible increased risk of breast cancer. But there is also the issue of earthquakes.

At one site in Lancashire there have now been over 50 seismic events since fracking company Cuadrilla started drilling in mid October. It claims the tremors are harmless. But some experts believe that they could lead to larger earthquakes.

It’s this backdrop of controversy which underscores Talk Fracking’s case. But it is specifically challenging the government’s policy positions on the industry.

The case is citing two particular government actions. Firstly, a written statement made in May by secretary of state for business, energy and industrial strategy Greg Clark. The statement instructs local authorities not to set:

Then, on 24 July, the government released its revised National Planning Policy Framework (NPPF) which includes updates on fracking. One particular section related to fracking states that authorities should:

As DrillOrDrop reported, the guidance (and Clark’s statement in May) effectively relaxed the rules around fracking.

But Talk Fracking is questioning all of the above. It has several concerns that Clark and the NPPF guidance have breached the law; namely, that they show failures to:

Talk Fracking’s legal case, seen by The Canary, makes very specific points. For example, it talks at length about the government’s obligations under the Climate Change Act; particularly to reduce carbon emissions by 80% by 2050.

In March 2017, independent government advisers the Committee on Climate Change (CCC) said that for fracking to proceed, three tests have to be passed:

Talk Fracking says that the government has failed to show evidence on how it would meet these three tests if fracking is allowed to proceed nationally. It also says that the NPPF was drawn up in relation to fracking exploration, whereas the CCC’s three tests are for the production stage.

This legal challenge exposes a major democratic deficit in the system. The government announced in 2015 that fracking is a force for good against climate change, without any public involvement in their policy. Three years later, and despite our client’s submissions which pointed out all the scientific developments since 2015 that seriously call [into] question [the] government’s position, they reached the same conclusion. Our client argues that this is unfair. We hope that the Court will agree and conclude that the government’s new fracking policy was unlawfully produced.

The Canary asked the Department for Business, Energy and Industrial Strategy (BEIS) for comment but received none.

‘Pulling the wool’ over fracking

Corré is unswerving in his opposition to fracking. He previously told The Canary‘s Topple Uncaged podcast:

The secretary of state has a duty of care when issuing a ministerial statement that is given substantial weight in local planning decisions… They renewed a ministerial statement that was made… four years earlier, about how fracking is a potential ‘bridging fuel’ to a low-carbon economy; didn’t look at any evidence, even though we had, as Talk Fracking… certainly supplied new evidence that showed, far from it being a bridging fuel, it actually exacerbates climate change and is a major contributor to climate change… There is no argument left, whatsoever, for any kind of fossil-fuel bridge to a low-carbon economy…

We’re just trying to… hold ministers and government to account… They’ve just tried to pull the wool over everyone’s eyes and push these things through… We’re not going to stand for it.

It’s not clear when the court will decide if the judicial review can go ahead. But the weight of evidence against fracking is strong. So, Corré and Talk Fracking’s case could be crucial in bringing about the end of this industry in the UK.