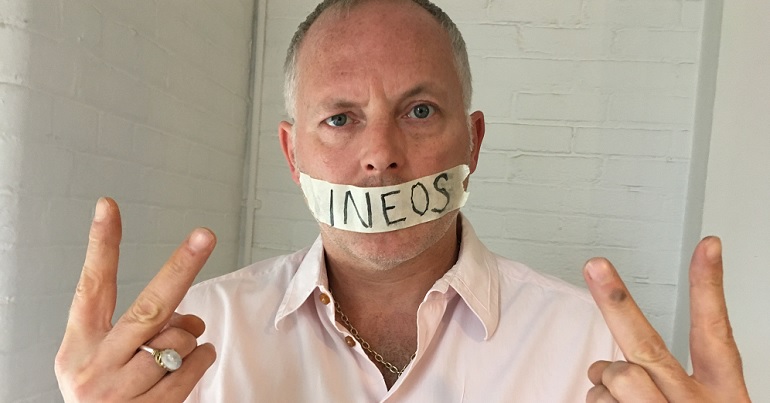 A campaign group led by a fashion designer-turned-activist has launched a judicial review against the government. The subject? Fracking. And speaking exclusively to The Canary, the man at the centre of the legal case says the government and the industry are engaged in “skulduggery”.

Joe Corré is the son of fashion designer and campaigner Vivienne Westwood. He founded the Agent Provocateur lingerie brand. But like his mother, he also campaigns on environmental and social justice issues. At the heart of his campaigning is fracking, via the Talk Fracking group.

The government says fracking could give the UK “greater energy security, economic growth and jobs”. It claims it’s “encouraging” companies to explore fracking in a “safe and environmentally sound” way. But the industry is very controversial.

As The Canary has documented, there are ongoing protests in the UK against fracking. At one site in North Yorkshire, campaigners have been prosecuted. At another in Lancashire, campaigners and local councillors have accused police and private security at the site of “disproportionate force” and trying to “provoke violence” – something both groups deny. Against this backdrop of opposition, Corré has mounted a judicial review.

He told The Canary, in an interview for the Topple Uncaged podcast, that:

They renewed a ministerial statement that was made… four years earlier, about how fracking is a potential ‘bridging fuel’ to a low-carbon economy; didn’t look at any evidence, even though we had, as Talk Fracking… certainly supplied new evidence that showed, far from it being a bridging fuel, it actually exacerbates climate change and is a major contributor to climate change…

There is no argument left, whatsoever, for any kind of fossil-fuel bridge to a low-carbon economy…

Corré is referring to two issues. Firstly, a written statement made in May by secretary of state for business, energy and industrial strategy Greg Clark. The statement instructs local authorities not to set:

Then, on 24 July, the government released its revised National Planning Policy Framework (NPPF) which includes updates on fracking. One particular section related to fracking states that authorities should:

As DrillOrDrop reported, the guidance (and Clark’s statement in May) effectively relaxed the rules around fracking.

It is these government positions which Corré and Talk Fracking are pushing for a judicial review of. They have several concerns that Clark and the NPPF guidance have breached the law; specifically, that they show failures to:

Looking at the weight of evidence, it’s little wonder the government has not conducted assessments, consulted or reviewed the evidence. Because much of it is damning about fracking.

Along with its contribution to greenhouse-gas emissions, it has been linked to polluted drinking water. Studies have also shown links to low birth weights, premature births and a possible increased risk of breast cancer. All this has made fracking in the UK highly controversial. But there is also the issue of earthquakes.

Fracking company Cuadrilla has been courting controversy for quite a while now. It’s been the subject of countless demos, political criticism and campaigns. But at the centre of the row is the site at Preston New Road in Lancashire.

In July, the government officially gave Cuadrilla the go-ahead to start extracting shale gas. But the decision drew more protests from locals. Then, a judge jailed three activists (whom another judge promptly freed). But after a court case, bad weather and protests stopped it, Cuadrilla finally began work on 15 October. This led to more protests.

As The Canary has been following, the British Geological Survey (BGS) recorded 36 tremors near to Preston New Road between 18 October and 4 November. The strongest of these happened on 29 October, with a magnitude of 1.1. The BGS said it was felt in Blackpool. Cuadrilla stopped work several times, because the magnitude of the tremors breached the government’s traffic-light warning system.

Cuadrilla stopped its activities for a while. But no sooner had it started again this week, yet more earthquakes began. The site had 12 in three days, as of 4pm on Thursday 13 December. The strongest one yet happened on 11 December, with a magnitude of 1.5. People felt it in Blackpool. But Cuadrilla has repeatedly played down the significance of these.

Corré told The Canary that the government’s traffic-light warning system was “put there for a good reason”:

because… if you had a… threshold of seismicity at 0.5, what that actually means is that you are expecting at least double… so if it’s 0.5 that means that the after-quake… can rise to double what the first one is…

Now, the industry would like that threshold raised to a 1.5

Indeed, as The Canary previously reported, Cuadrilla is trying to force the government to change it to just that.

Chaos on the continent

But Corré said you only had to look at the Netherlands, where Shell operates, to see what the potential is for catastrophe:

They [Shell] have told the population for years that, actually, you can have an earthquake up to a [magnitude] 4 which will not cause you any damage. And that’s exactly what the industry has been saying over here. What they’ve done is that they’ve actually just shut down the biggest gas field in Europe, because of the seismicity.

Over the years, it has caused over £9bn of damage to people’s property… all the schools have had to be evacuated… all the buildings are falling down. And it’s not just about the property damage. It’s about the effect that that has on people’s state of mind… children waking up scared, having nightmares all night because they think the house is going to fall down. People’s state of mental health and anxiety, stress-related conditions. That’s all about what’s happening above the surface.

And in that location… they’ve been doing what they’re calling ‘conventional drilling’. But what we’ve seen… with the fracking industry [in the UK]… is these continually moving goal posts, where ‘conventional’ has been completely blurred with unconventional… They did this… conjuring trick where you’ve got fracking and non-fracking fracking; you’ve got all the sort of skulduggery that’s been going on with the written ministerial statements…

Moreover, as The Canary previously reported, some UK sites like Preston New Road are also on top of former coal fields, which increases the risks of earthquakes even more. Then you have the government’s independent ‘tsar’ effectively trying to persuade the media to report positively on fracking. But to top it all off, even the government’s own public opinion polling shows support has bottomed out.

As Corré summed up, the controversy over fracking:

has opened people’s eyes to the machinations between government and corporate industry. And it has… opened people’s eyes to all the sort of skulduggery that’s gone on with… PR slogans of ‘energy security’, of ‘jobs’, of ‘transitions to a low-carbon economy… ‘gold-standard regulations’… all these buzzwords people have heard, they no longer work any more…

This is why his legal challenge is so vital.

The fracking industry in the UK is based on PR, lies and corporate interests. But the reality is far more dangerous and nefarious than that. Politically, as Corré pointed out:

The Conservative Party are now isolated as the only political party that support this industry.

Fracking is truly on the ropes in the UK.

Corré and Talk Fracking’s case, along with one from Friends of the Earth, is being heard in the High Court from Tuesday 18 December. He says that:

We’re just trying to… hold ministers and government to account… They’ve just tried to pull the wool over everyone’s eyes and push these things through… We’re not going to stand for it.

A judge at this initial hearing will decide if they have a case for a judicial review. In any sensible person’s book, based on the damning evidence, the answer would be ‘yes, there is a case’. Now, we wait to see if the legal system agrees that fracking is the most toxic of industries.