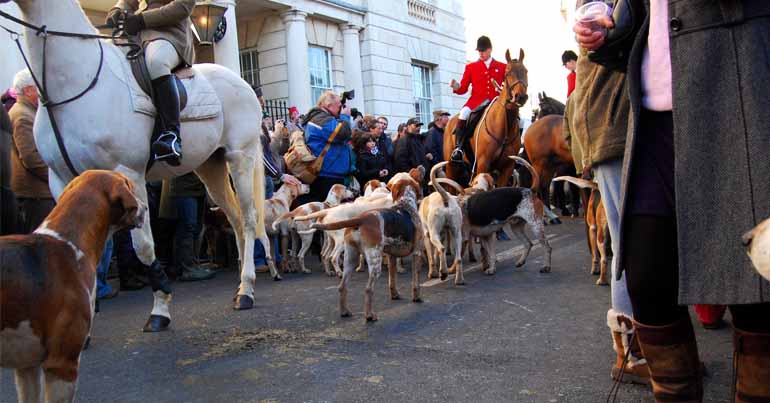 A second Cornish town has revealed it wants to ban hunts from its streets during feast day celebrations. The move is the latest in a string of towns that are telling hunts they’re no longer welcome.

Councillors in St Just have said they will debate the presence of the Western Hunt in the town at the next council meeting. CornwallLive reported that the proposal was backed by “at least three councillors”.

It comes after another Cornish town, St Ives, successfully barred the Western Hunt from its streets on feast days. In January, St Ives council described hunting as “inhumane” and “an anachronism”. It also said trail hunting had “generally… led to harm to animals”.

Because St Ives council issued the Western Hunt with an invitation, barring the hunt from the town was a simple process. However, if St Just council agrees, the council faces a question over how to enforce a ban. Unlike St Ives, the St Just council doesn’t directly invite the hunt.

Other towns in England have taken action against hunts meeting in their streets on Boxing Day. Tetbury made national headlines in December 2018 after its council banned the Beaufort Hunt. In a statement on the decision, Tetbury council said that concerns over “reputational damage” from anti-hunt protests were a factor. Meanwhile protests in Elham, Kent, reportedly forced the East Kent with West Street Hunt’s Boxing Day meet out of the village.

Local residents and the local Labour Party in Grantham opposed the Belvoir Hunt’s presence in the town in December 2018. And nearly 20,000 people signed a petition by Grantham Against Bloodsports. Following this, the hunt was unable to meet at its traditional spot in the centre of town.

Now other towns across the country are facing pressure to ban hunts. BristolLive reported on 13 February that more than 3,000 signatures had been collected for a petition to ban the Berkeley Hunt from Thornbury. And a January poll by GloucestershireLive revealed that 60% of people surveyed want hunts out of the county’s streets on Boxing Day.

The fight against hunting has been a long and drawn out process. Saboteurs and monitors remain on the frontline of helping wildlife escape the hunts’ snapping jaws. But everyone has an important role in holding hunts to account wherever they go. Especially if they’re in our towns and villages.