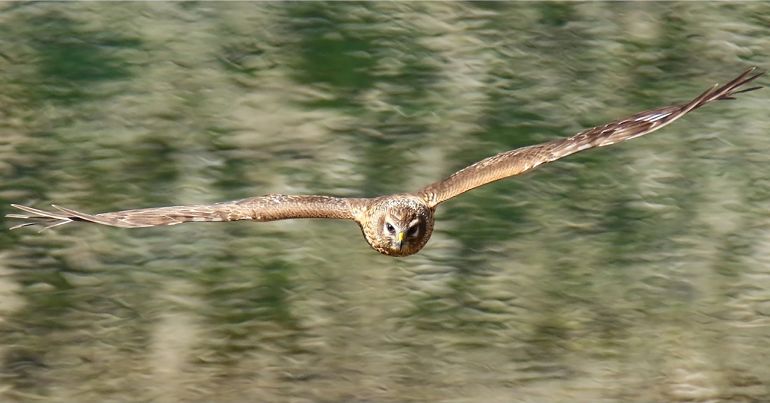 A new study suggests that grouse moors are rife with wildlife crime. It points a finger squarely at moorland management, and even pro-shooting interests haven’t been able to deny the evidence.

On 19 March, Nature Communications published a decade-long study into hen harrier deaths across England. It found that the birds were “ten times more likely to die… or disappear” after spending time in areas managed for grouse shooting. Furthermore, only 17% of harriers lived beyond their first year. As well as voles and meadow pipits, hen harriers also eat red grouse chicks.

The team, led by researchers from the University of Cape Town and Aberdeen University, used GPS tags to track data from 58 birds over ten years up to 5 October 2017. Results showed 42 birds were illegally killed or disappeared without a known tag malfunction. And there was a positive correlation between grouse moor coverage and likelihood of hen harrier death: 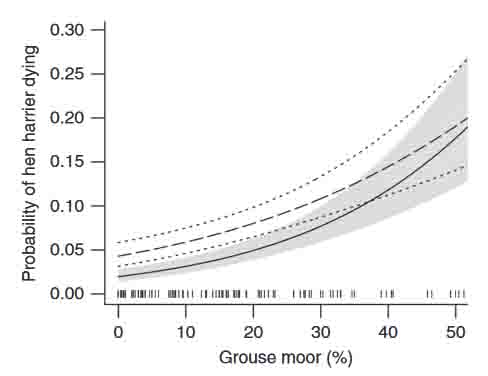 Co-author Steve Redpath told the Guardian that sudden ‘failures’ of tags on grouse moors were happening “much more than you would expect by chance”. The study concluded that “illegal killing is the most parsimonious [simple, uncomplicated] explanation for the fate of these birds”. Moreover, it said there was “strong support” for the idea that “land managed for grouse shooting” (i.e. patrolled by gamekeepers) is directly responsible for these crimes.

Natural England backed the study’s findings. Director Rob Cooke said it “identifies the scale of the problem hen harriers have faced on grouse moors”. And Stephen Murphy, Natural England’s lead on collecting data for the study, said results “confirm what has long been suspected” about the impact of illegal killing on hen harrier numbers.

Pro-shooting interests also welcomed the findings. For example, the British Association for Shooting and Conservation (BASC) said the illegal killing of hen harriers “risked ‘terminal damage’ to shooting”. It called for such criminal activity to “stop. Full stop”. Meanwhile the Moorland Association, which represents grouse moor owners, said that “persecution… must stop”.

The Game & Wildlife Conservation Trust (GWCT) was less warm in its response. Although it didn’t dispute the study, GWCT suggested the “inexplicably failed” tags may have resulted from environmental rather than human factors. It concluded, like BASC, that the government’s hen harrier action plan is the best way forwards from the study’s findings.

On the other hand, campaigners against raptor persecution were less convinced. Ruth Tingay, founder of investigative website Raptor Persecution UK, called the study’s results “predictable” and “damning”. But she criticised Natural England’s claim that “working in partnership” with groups such as BASC and GWCT could work. She said Raptor Persecution UK:

fundamentally disagree[s] with this statement. These are crimes that are being committed – and in our view, serious organised crimes – the people involved should be treated as criminals, not partners.

Former RSPB head of conservation Mark Avery said he admired the “cleverness” of the study’s analysis and called it a “devastating critique” of the grouse shooting industry. But he also criticised Natural England’s response. Avery said that a desire to work with moor owners showed Natural England had “lost its moral compass”.

The days are numbered

It seems clear that moorland managers are murdering hen harriers to protect the grouse industry’s interests. While pro-shooting groups are unable to dispute the data, they’ve tried to spin the results. BASC tried to escape accountability by pinning the blame on ‘a few bad apples‘. And GWCT tried to introduce uncertainty to the study’s results where there isn’t any. Both throw vague individuals under the bus in an attempt to save the industry’s public face. And they display bold-faced hypocrisy after previously refusing to turn up at a crucial raptor protection meeting.

As a result, Tingay and Avery are right to call Natural England out for working with groups apparently protecting these criminal interests. It suggests that, as the net closes in on grouse shooting, the industry survives only because of high-level protection. But the strength of this study means even the government can’t ignore what campaigners have been saying for years. Grouse shooting is responsible for the illegal killing of hen harriers. And now its days are numbered.