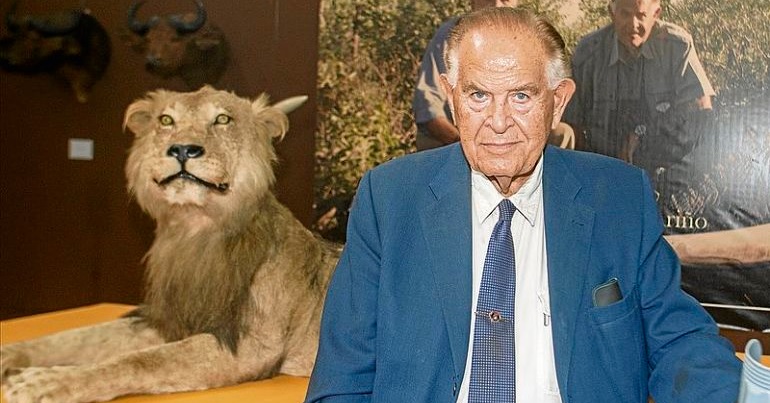 The Campaign to Ban Trophy Hunting (CBTH) has released a report on who it says could be “the world’s biggest trophy hunter”. Spanish trophy hunter Tony Sanchez-Arino has apparently killed over 130 lions and more than 1,000 elephants, among others.

Sanchez-Arino has also admitted that he and his fellow hunters will end up ‘shaming humanity’. Because, he says, unless hunters “cease” killing elephants, they’ll hunt the African elephant “to extinction in the wild within our lifetime, to the shame of humanity”.

A long life of killing

Sanchez-Arino is now 89-years-old. He says he was already killing multiple animals when he was 13. In his 2002 book, Elephants, Ivory & Hunters, he explained:

I broke my own record at 17 with [shooting] 54 rabbits in one morning. 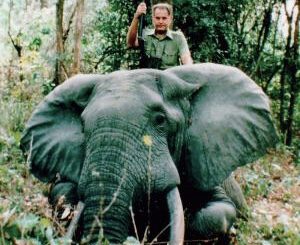 The prolific hunter is a personal friend of former Spanish King Juan Carlos, who himself is a notorious trophy hunter. In his 2002 book, he waxed lyrical about killing “magnificent” elephants. He said hunting them provides “the maximum” excitement and their tusks are “the best a hunter could dream of”. 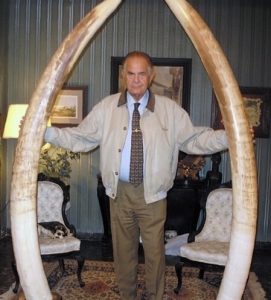 However, he also conceded in the book:

The long tuskers have long ago vanished forever, and only by extremely good luck can the hunter come across a good trophy… it has become quite clear that the African elephant has suffered enormous and irremediable losses, and it is apparent that unless these activities cease, the African elephant will be hunted to extinction in the wild within our lifetime, to the shame of humanity

He calls trophy hunting an ‘art’. Most people would call it an obscenity.

He has been allowed to get away with murder by international laws that exempt trophy hunters, governments that give them licences to kill, and an industry that lavishes them with awards for killing the most and the rarest animals.

Trophy hunters should get prison, not permits and prizes.

Trophy hunters don’t “get prison” because the Convention on International Trade in Endangered Species of Wild Fauna and Flora (CITES) classifies the industry as non-commercial. That’s regardless of the fact that, as CBTH points out, it’s a multi-million dollar industry. Organisations like Safari Club International (SCI) – an advocacy group for hunters – are making a killing out of the slaughter of wild animals through vast donations. Safari hunting businesses are also commercial, profit-making enterprises that charge people to kill wildlife. In ‘canned’ hunting facilities in South Africa, the businesses involved even sell the parts of an animal the hunter doesn’t want to take home as a ‘trophy’, such as bones, for profit.

But because hunters themselves aren’t supposed to sell on the ‘trophies’ of animals they kill, CITES deems it non-commercial activity.

Human-driven extinction, including of humans

As a recent report from the UN concluded, human activity has now done so much damage to biodiversity, that human society itself is at risk. Chair of the Intergovernmental Science-Policy Platform on Biodiversity and Ecosystem Services (IBPES), Robert Watson, said:

The health of the ecosystems on which we and other species depend is deteriorating more rapidly than ever. We are eroding the very foundations of economies, livelihoods, food security, health and quality of life worldwide.

The animals that hunters shoot for ‘fun’ are part of our ecosystems. Elephants, for example, are a keystone species. As National Geographic explains:

A large number of the species killed by trophy hunters are at risk of extinction. Indeed, of the 1.7 million ‘trophies’ traded worldwide between 2004 and 2014, around 200,000 of them were from threatened species.

Speaking about the UN report’s findings, Watson also said: “We have lost time. We must act now”. CBTH makes a similar argument about trophy hunting. It’s calling on CITES to stop hunters killing elephants and lions “as a matter of urgency” due to their rapidly dwindling numbers. There are only around 20,000 wild lions and around 400,000 elephants left.

CBTH is also calling on the UK government to ban the import of ‘trophies’ from endangered species – the government has been stalling on a ban of lion trophy imports since 2017.

Advocates of hunting claim it aids conservation. But severely declining populations of elephants, for example, in most countries that allow the practice show that the opposite is true.

Obviously, these animals face other threats, such as habitat loss, human / wildlife conflict, and poaching. We will have to find solutions to all those threats for animals and, as a consequence, people, to survive. The very least humans – who are responsible for all the threats to these species – can do is put an end to people killing them for ‘fun’.

If we’re not even capable of that, then perhaps extinction is exactly what humans deserve.

Featured image and other images via CBTH