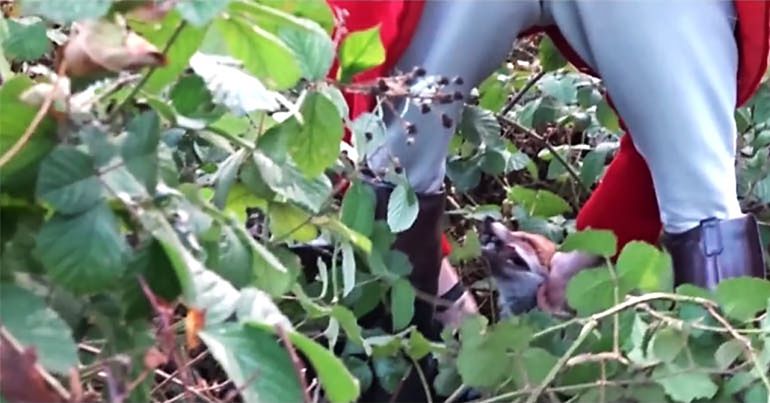 Campaigners have hit out at the ban on hunting, saying it’s so weak that “clear” cases of illegal acts aren’t getting to court. It comes after investigators dropped two cases of alleged hunting within days of each other. And they show that a total ban on hunting is urgently needed.

On 16 May, anti-hunting group Cheshire Monitors said that the “Cheshire Hounds Hunt [has escaped] prosecution again”. This referred to a 15 November 2018 incident that the monitor group caught on camera. In the video, a member of the hunt is seen collecting a dead fox from undergrowth and putting it into a bin bag. Cheshire Monitors said at the time that it had “comprehensive footage” of illegal hunting, including the killing of the fox.

However, BBC News reported on 17 May that Cheshire Police would take no further action against the Cheshire Hunt. This was because of “insufficient evidence” of intentional hunting, the police said. It also noted the “complexity” of the case.

we think the CPS [Crown Prosecution service] hasn’t taken these cases because they know the Hunting Act is so weak. They know the defence lawyers for the hunts are so well-paid and so used to telling lies, they know how to escape through the loopholes.

The most recent case led Martin to repeat her stance. Speaking to The Canary on 20 May, Martin said:

Yet again, we were unable to produce enough evidence to have this hunt in court, due to the hunting act being written to protect these criminals rather than to achieve justice in court. … But unfortunately, the local CPS, who are so poorly funded that many of them have to work from home and have no experience of hunting cases, have yet again felt they have to decline a strong case of lawbreaking.

She went on to say that “although it’s clear to everyone what is going on [in the video] it would not be successful in court”. Martin blamed this on the Hunting Act. She said the law is “so weak [that] the prosecution is unlikely to be successful” against defence lawyers familiar with loopholes in the law.

Another recent decision exposed such pitfalls in the law. An 18 May press release by Three Counties Hunt Saboteurs said that a CPS decision had led that week to police dropping cases of assault and illegal hunting against the Cotswold Vale Farmers Hunt.

Three Counties Hunt Saboteurs said that on 23 October 2018, the hunt chased and killed an animal in a hedge. The press release went on to say that:

Huntsman Gary Williams could clearly be heard encouraging hounds on from the opposite side of the hedge that hounds were interested in, he was using voice commands and horn calls consistent with ‘traditional’ fox hunting. … It was shortly evident that the hounds had killed, Williams heard ‘blowing the kill’ (a horn call not often heard since the Hunting Act 2004 came into force as it shows that huntsman is aware of a kill taking place, is informing the remainder of the hunt riders and the hounds of it). He was heard praising the hounds and telling them to “break him up, break him up” which means to eat the fox.

In footage of the incident seen by The Canary, hounds go into cry along a hedgerow. A horn call resembling “doubling the horn“, which is used to encourage hounds after a fox has been disturbed, is then heard multiple times. Several seconds later, a horn call similar to “the kill“, which is made when “hounds have caught and killed their quarry”, rings out. And after that, a male voice shouts “break him up”, which the video says is a signal to eat the remains. The video then shows members of the hunt passing a full bin bag between themselves before taking it away.

This happened during cubbing season when young hounds are trained to kill fox cubs.

The press release also said that, in his defence, Williams claimed:

hounds had gone off on a trail (of which no evidence has been provided) and he realised that they were spending time within the hedge. He claims to have realised that there was a fox in the hedge but that it was obvious that it had been dead for several days so he allowed them to have it and encouraged hounds to tear the body up.

Three Counties Hunt Saboteurs said neither it nor the police believed the fox had already been dead for several days.

However, to prove guilt under the Hunting Act, a prosecutor must show that a huntsman intended to kill a mammal such as a fox. This resulted from a 2009 case in which the High Court decided the act of “searching” for mammals wasn’t illegal.

As a result, despite no evidence of trail hunting, the CPS wasn’t confident in Williams’ intention.

The Hunting Act was brought in by Tony Blair‘s Labour government. In his 2010 memoir A Journey, the former prime minister admitted sabotaging the law and telling then-minister of state Hazel Blears to “steer police away from enforcing the law”. The outcome has been an uphill struggle for anti-hunting activists and the police to successfully prosecute hunters.

What these two cases show is that the wording of the law makes it nearly impossible to prove illegal hunting. Even hunters in traditional costume, with a pack of hounds, intentionally moving through habitats native to foxes, hare and deer – and then chasing those animals – isn’t enough to prove illegal hunting. That’s why a total ban on hunting, which stops hounds and hunters going near those creatures, must happen now.