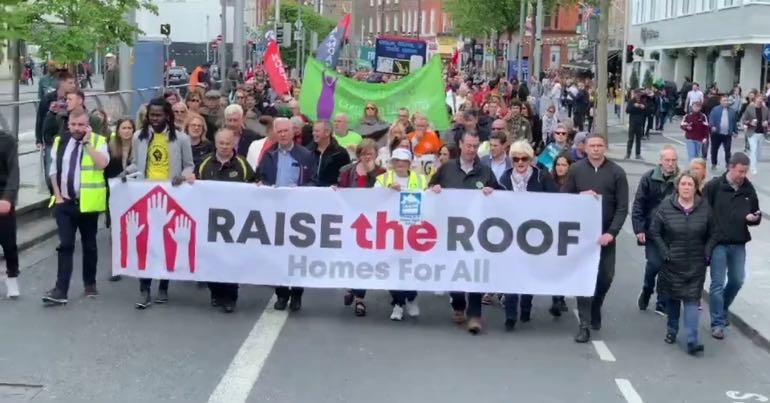 Thousands of people have taken to the streets in Dublin to protest the housing and homelessness crisis gripping Ireland. It comes as the crisis in the country continues to worsen.

A wide array of groups

Organised by Raise the Roof, a coalition of housing and political groups, the demonstration took place on Saturday 18 May. Roughly 20,000 people hit the streets, according to one report. Inner City Helping Homeless Dublin (ICHHDublin) said it was there to demand “an end to government “indifference”:

We are at the #RaiseTheRoof housing demonstration as feet hit the street to demand an end to governement indifference towards the housing and homelessness emergency.

We finish outside the GPO with speeches and musical performances so please join us!#RaiseTheRoof #HomesforAll pic.twitter.com/FoOMoX9F2Y

The Workers Solidarity Movement (WSM) also attended the demonstration, arguing that the “housing crisis has taken the joy out of so many of our lives”:

Watch 1000s take to the streets of #Dublin as part of the latest #RaiseTheRoof housing march in this speeded up video of the entire march. The housing crisis has taken the joy out of so many of our lives as people face #homelessness or rents they can't afford & insecurity pic.twitter.com/ShxOO9Oxyj

Also attending the march was the Movement of Asylum Seekers in Ireland (MASI):

"And so we march for the constitutional right to housing so that the next generation won't have to march for it" #RaiseTheRoof pic.twitter.com/3Uo3d4fDpe

Age Action, an advocacy group for older people in Ireland, was another attendee:

Member of the Irish parliament Richard Boyd Barrett, meanwhile, explained that he was there because of the “government’s disastrous housing policies”:

At the #RaiseTheRoof housing demonstration today – thousands on the streets demanding public and affordable homes, an end to evictions and radical action to address the housing emergency. ⁦@pb4p⁩ pic.twitter.com/EnW56bV3pM

But it was during the speeches that a number of activists highlighted for everyone the problems Ireland currently faces. Housing activist Fr. Peter McVerry explained to the protesters the scale of the crisis. He told them that the cost of renting or buying a home is “beyond the means of most” Irish people. He also revealed that:

Dublin City Council predicts that homelessness is going to increase for at least the next three years.

And what’s more, he pointed out that:

The prediction is that rents will go up by 17% over the next three years.

As a result, he accused the Irish government of being ‘the emperor with no clothes’.

The land is here. The money is here. What’s lacking is a moral compass and a political will to build public housing for the people of Ireland.

He ended by insisting that:

Aisling Hedderman of the National Homeless & Housing Coalition also criticised the government’s handling of the crisis. She argued that it willingly “pumped” money into private emergency accommodation for people; but it would not fund the “prevention” of homelessness and the building of public housing. And she finished by arguing:

Irish senator Frances Black also spoke, as well as performing a song about Irish socialist revolutionary James Connolly. She said that he:

With house prices and homelessness only getting worse in Ireland, the government seems to simply not care. Eoghan Murphy, the minister for housing, has suggested “co-living” as a possible solution. One developer-proposed co-living building in Dublin would have one kitchen per floor for tenants. This means that 42 people would share one kitchen on one of the floors. Given that the government sees this as a possible solution, it is clear that it doesn’t really care. So the only hope of solving the crisis is if people keep standing up, uniting, and demanding change.