Irish rental housing is more inaccessible than ever before. Protesters prepare to hit the streets. - The Canary 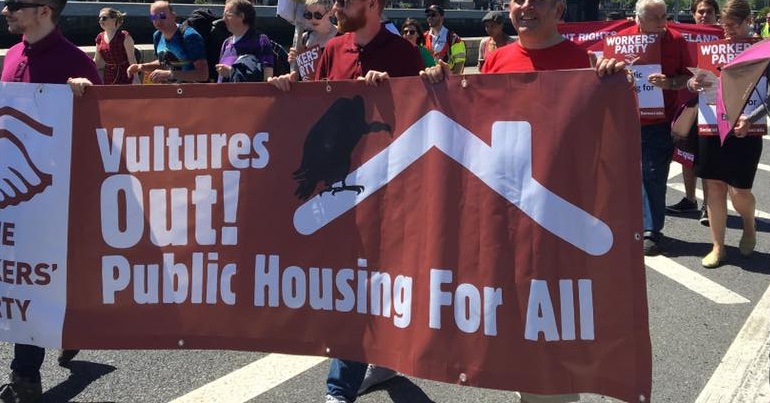 A new report shows that rents in Ireland have risen to an all-time high. The report, written by professor of economics Ronan Lyons for property website Daft.ie, reveals that rents have now risen for the 27th quarter in a row. Lyons also points out that the housing supply has never been lower.

The report comes as activists have planned a demonstration for 18 May to highlight Ireland’s housing and homelessness crisis.

In the report, Lyons notes that rents in Dublin have increased by 6.8% since 2018. Nationally, the figure is higher, with rents having risen by 8.3% during the same period. This puts the average national rent at €1,366 per week. A recent report, meanwhile, revealed that one in every 10 households renting privately is forking out over 60% of its income to pay rent.

The amount of properties to rent is also “at its lowest ever level”, with only 2,700 homes available to rent nationwide on Daft.ie. According to Lyons, the previous low of 4,400 was last seen in 2007 when Ireland was in the midst of an economic boom.

Using Dublin as an example, Lyons states that the capital alone would have to build 80,000 homes over the next three years to meet the demand.

Ireland’s housing policies have been criticised by two UN officials. Surya Deva and Leilani Farha wrote to the Irish government in March:

We are writing to express our concern with respect to your Government’s practice of adopting laws and policies which treat housing as a commodity and undermine the enjoyment of housing as a human right.

They went further, arguing that the government:

has disconnected housing from its core social purpose of providing people with a place to live in with security and dignity.

In response to the housing and homelessness crisis, activists have organised a demonstration for 18 May in Dublin. Thousands have previously taken to the streets in similar protests over the last year and others have engaged in direct action. Inner City Helping Homeless (ICHH), one of the organisers of the upcoming march, argued that:

The homelessness and housing emergency continues to spiral out of control and as long as there is no political will to build public housing on public lands we will see the private market and developers reaping the profits of the ongoing emergency.

Recently released figures have shown that, at the end of March, over 10,000 people in Ireland were homeless.