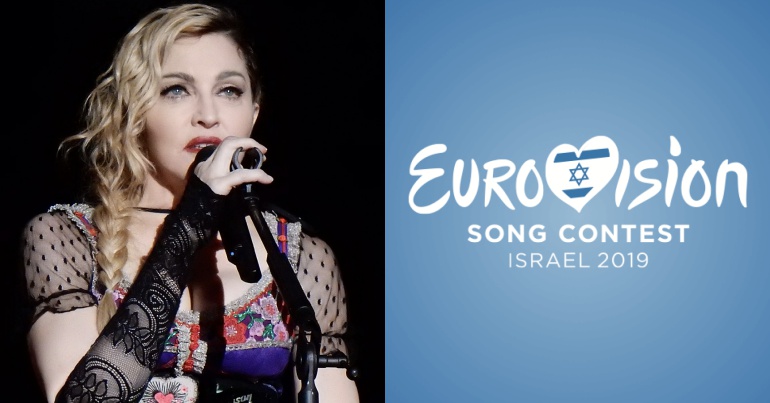 Pressure is rising for Madonna to cancel her scheduled appearance at the Eurovision song contest final in Israel on 18 May. And now, activists have turned one of her most iconic songs into a powerful call to support Palestinian people and boycott the competition.

London Palestine Action (LPA) turned Madonna’s hit song Papa Don’t Preach on its head. The new lyrics ask her to step out of the Eurovision, saying she really [0.17] “should know by now about the BDS movement”. The Boycott, Divestment, Sanctions (BDS) movement is a “Palestinian-led movement for freedom, justice and equality”. And as the song continues:

A context of oppression and massacres

In March 2018, Palestinian people began the Great Return March. Since then, Israel has killed at least 250 unarmed protesters including journalists, medics, and children. An estimated 29,000 people have also been injured. And as Jewish Voice for Peace wrote in March 2019:

A recent investigation by the UN Human Rights Council determined that Israel Intentionally Shot Children and Journalists in Gaza in 2018, and that the Israeli military may have committed crimes against humanity in its shoot-to-kill response to the Great March of Return mass protests.

Alongside alleged Israeli war crimes and ethnic cleansing in the occupied West Bank, people in Gaza continue to live in what many observers describe as an open-air prison. It’s also a place where water pollution is a “leading cause of child mortality”. And in 2018, the UN said Gaza was facing “an unprecedented humanitarian crisis, caused by over 10 years of Israeli blockade“.

Israeli human rights organisation B’Tselem reports (at the time of writing) that, between 19 January 2009 and 30 April 2019, Israelis killed 3,503 Palestinians and Palestinians killed 187 Israelis.

The latest call for Madonna to pull out of Eurovision, meanwhile, comes just a week after one of the deadliest Israeli bombing assaults on Gaza since 2014. Israeli forces killed at least 25 Palestinians, including several children and pregnant women. Armed groups in Gaza, meanwhile, reportedly killed four Israeli civilians – the first such deaths since 2014.

“Culture as a form of propaganda”

Madonna must join the ongoing cultural boycott and refuse to attend the Eurovision. As the Palestinian Campaign for the Academic and Cultural Boycott of Israel (PACBI) explains:

So any international artists performing when Israel hosts the Eurovision competition are complicit in this propaganda because “they help to create the false impression that Israel is a “normal” country like any other”. As Jewish Voice for Peace also said in an open letter to Madonna:

If you believe in equality and dignity for all, you will choose not to lend your star-power to the far-right Israeli government that is using Eurovision to cover up their continued human rights abuses. Your performance at Eurovision will bring harm to the Palestinian struggle for freedom, justice and equality.

Madonna is no stranger to politics. She has used her ‘star power’, for example, to challenge US president Donald Trump many times. At the Women’s March in 2017, she said:

good will win in the end… There is power in our unity and… no opposing force stands a chance in the face of true solidarity.

It’s now time for her to wake up, act on that, and stand in solidarity with women, children and men in Palestine too.