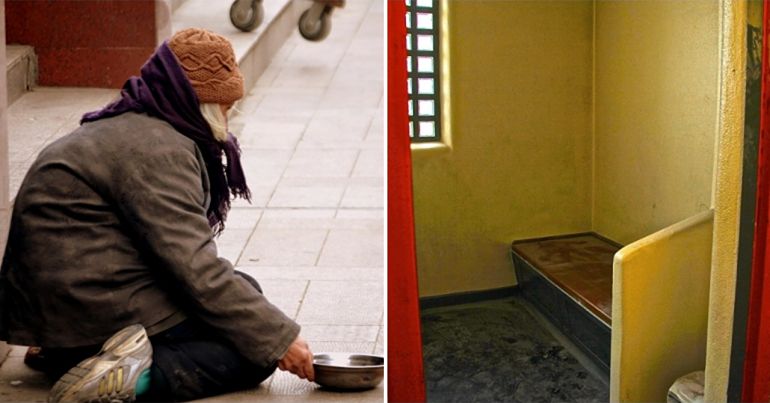 Sitting on the pavement in Somerset “without reasonable excuse” landed a homeless man with a 20-week jail sentence. According to County Gazette, the man was also convicted of two other similar offences.

‘A high risk of begging’

A Criminal Behaviour Order (CBO) banned the man from sitting on the pavement. He was sentenced to three concurrent 20-week prison sentences and ordered to pay a £115 victim surcharge.

The court heard there was considered to be a high risk that he could be seen to be begging and that his deliberate actions were the latest in a line of deliberate breaches of the order.

CBOs replaced Anti Social Behaviour Orders in 2014 when Theresa May was home secretary. But charities widely criticise the orders for criminalising homeless people. Dale Parker, co-founder of The People’s Picnic, told the BBC in 2017:

More often than not, the only crime those people have committed is the crime of being poor.

Meanwhile, a Guardian investigation in 2018 found that hundreds of:

vulnerable homeless people are being fined, given criminal convictions and even imprisoned for begging and rough sleeping

It also reported that 50 local authorities use Public Space Protection Orders (PSPOs). Councils can use these orders to criminalise a range of behaviour, including rough sleeping, begging, and drinking in the street. The Guardian said:

Lawyers, charities and campaigners described the findings as “grotesque inhumanity”, saying disadvantaged groups were fined for being poor.

Breaching a PSPO is only punishable by a fine. But a conviction under a PSPO can then lead to a CBO being imposed. And breaching a CBO can mean up to five years in jail.

So in simple terms, a person could end up facing five years in prison for an ‘offence’ such as persistent begging because they have a CBO. But without a CBO, they’d only receive a fine.