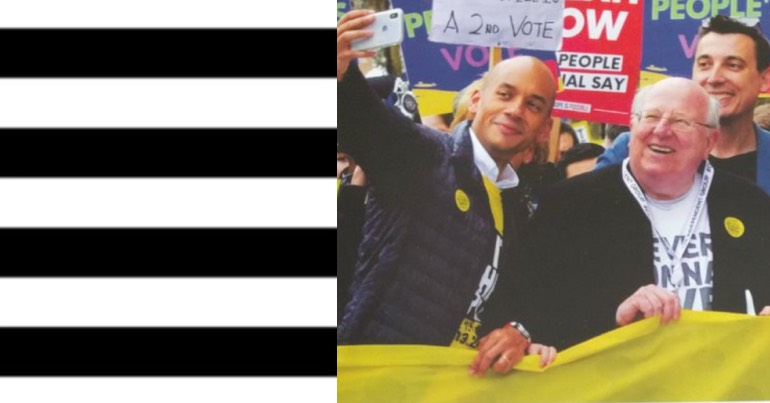 As the UK gears up for the EU elections, parties are releasing their campaign literature. New pro-remain centrist party Change UK is no exception.

But if the reaction to its leaflet is anything to go by, it might consider changing the design team. And one thing it shows hasn’t ‘changed’ is that it’s still all about them.

As usual, it’s all about them

Change UK is the rebranded party of the Independent Group. It’s made up of Labour and Conservative defectors including Chuka Umunna, Mike Gapes, Chris Leslie, Anna Soubry, and Heidi Allen, among others.

But its new material aimed at addressing Brexit and Britain’s “broken” politics hasn’t had a positive welcome on social media.

One Twitter user felt the selfie imagery seemed “self absorbed”:

The CUKTIG leaflet I got today… When dull meets apparently self absorbed. Really not sure taking a selfie sets the right tone folks. Get professional help won't you? You're good for it. pic.twitter.com/lpNugWPLLp

But Change UK’s “self absorbed” focus is unsurprising. After all, its MPs have refused to hold by-elections. And this is partly because some of them believe they were voted in as individuals, not party representatives.

Journalist Joana Ramiro was also unimpressed by Change UK’s output. In two videos, she unfavourably compares the election leaflet to Labour’s. She argues that Change UK’s is an example of “astroturfed propaganda”. This means a corporate-run campaign that pretends to be a grassroots-led political movement.

Inspired by @AOC in #KnowDownTheHouse I’m gonna show you how you can tell the difference between a grassroots lead campaigning leaflet and astroturfed propaganda by comparing the @UKLabour vs the Change UK leaflet I just got thru the post pic.twitter.com/zuxbbTvg6A

And here’s the #EuropeanElections2019 @UKLabour London region pamphlet I received and why it’s much much better (politically as well as communications-wise) pic.twitter.com/0X3V3f9Wzs

And of course, they have a bus…

But Change UK has branched out beyond leaflets.

Clearly believing that buses really do make all the difference in British public votes on the EU, Change UK has invested in its own:

But some people aren’t impressed by this either, with several commentators noting its amateurish appearance:

Is this in… Arial? And with an apostrophe that looks like it was pasted from Notepad? And is that crossed box a symbol from Wingdings? Was the CUK bus, in fact, designed in Microsoft Paint? https://t.co/pi6H4iNucM

Photography courtesy of @jessicaelgot. Bus design courtesy of someone who tries laying out posters for a village fete in Microsoft Word, then gets grumpy when the printers say they can't use it.

Academic and author Tom Mills brought the Vengaboys back to life:

The Change UK bus is comin' and everybody's jumpin' pic.twitter.com/J6s15mp3fF

Now absolutely convinced that @ForChange_Now are an inside job, by supporters of @jeremycorbyn to destroy any remaining centrist credibility. I mean, look at the state of this bus. Well done agents @MikeGapes, @ChukaUmunna & @angelasmithmp. Top work! ✊ 🤫 pic.twitter.com/IIcj1Kx1iq

Buses and leaflets are the least of Change UK’s worries, according to polling

If recent polling is anything to go by, then British voters aren’t impressed by Change UK either.

And according to YouGov polling cited in the Times, few think Change UK is a party “here to stay”:

Voters don't think Change UK and the Brexit Party will be here to stay: https://t.co/0opPs1QPxT
(£) pic.twitter.com/Qxtxvc4xtH

So after much hype, it looks like HMS Change UK is sinking fast. And probably with its name in a dodgy Microsoft font emblazoned across the stern.