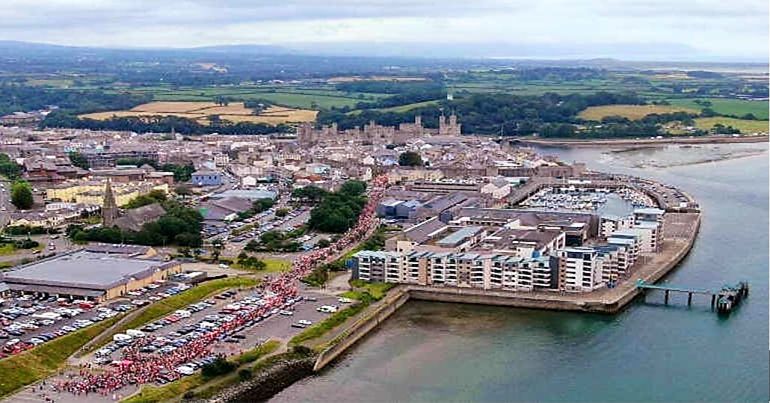 On Saturday 27 July, at least 8,000 supporters of Welsh independence marched through the streets of Caernarfon in North Wales. The demonstration was organised by ‘All Under One Banner’ (AUOB Cymru). People came from all over Wales to join the march.

Welsh activist Helen Jones told The Canary that the number of demonstrators was over double the last indyWales march in Cardiff earlier this year.

Holding the rally outside Caernafon castle was strongly symbolic. The castle has been used by the royal family for the investiture of successive princes of Wales. Many see it as a symbol of the domination of Wales by London.

Undod (meaning ‘Unity’ in Welsh) is a movement for radical independence in Wales. A spokesperson for Undod told The Canary:

[Saturday’s] rally was another step forward for the burgeoning indyWales movement. To have upward of 8,000 people marching for independence, even in the heartlands of traditional Welsh nationalism, is unprecedented – and the contrast yesterday with the scenes of fawning royalism and imperial pomp that took place in the town 50 years ago during Charles’ investiture speaks of a long revolution in the politics of Wales.

In the shadow of colonialism

Edward I subjected Wales to English rule in the thirteenth century. Caernafon castle was built on Edward’s orders. According to Undod:

With speakers staged in the shadows of the most striking monument to Edward the first’s colonial project, it was an apt reminder of the militarism, oppression and power politics that the movement must oppose, in all its forms.

Our nation’s throat [has been] choked by Westminster’s claws. Our economy, society and language has suffered immensely and our voices silenced for nearly a millennium. But here we are standing in solidarity today in this magnificent town. With the castle of a man who dreamed of exterminating us in ruins behind me… We are showing the world, and the cruel might of Westminster, that 800 years of suffering has not vanquished the flame of freedom that burns brightly in our hearts.

Wyn Jones went on hunger strike last year to demand that broadcasting in Wales be under the control of the Welsh Assembly.

Undod hopes to be a part of ensuring that the movement for Welsh independence is radical and internationalist. Undod’s spokesperson continued:

The work of AUOB Cymru and YesCymru must be celebrated in bringing together the last two marches and putting independence truly on the political map in Wales. It is now up to groups like Undod to ensure that its possibilities are spelled out in substantive, radical ways – and that we set out a vision and policies that are a part of a wider, global emancipatory politics.

Our political traditions in Wales allow for the values of community, equality, and internationalism to be at the heart of the indyWales project and ensuring that it is the working classes and minorities who are prioritised.

In that spirit of internationalism, Helen Jones told The Canary that a contingent of Kurdish residents of Wales joined the March on Saturday. They brought a message of solidarity from the Kurdish freedom movement to the movement for Welsh independence. Jones said that activists from Scotland and Catalonia also joined the demonstration.

‘No Fascism in a free Wales’

Many participants in Saturday’s march were shocked at the presence of Ein Gwlad. This is a Welsh nationalist party that has been accused of far-right sympathies. Anti-fascist stickers were distributed in Welsh and one marcher carried a placard proclaiming ‘No Fascism in a free Wales’.

The movement is still young, and many people are engaging properly with politics for the first time, and so we must be vigilant in ensuring that unsuspecting people’s heads are not turned by the sort of motifs and tropes of the alt-right that threaten our society. The most surefire way of doing this is to ensure that the indyWales movement advocates for environmentalism, feminism, republicanism and socialism.

‘Independence truly on the political map in Wales’

The movement for Welsh independence is gathering momentum fast. Now is the time to ensure that the politics of indyWales develop into something emancipatory and radical. Something that can challenge the domination of Westminster and move towards a just, free, and truly democratic society.