A hunt was caught next to a criminally damaged badger sett. But the public body that caught it took no action. - Canary 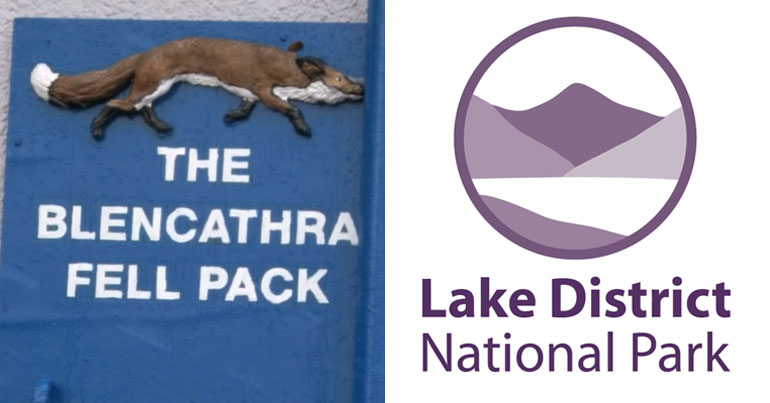 Documents released after a freedom of information request appear to show the Blencathra Foxhounds has a case to answer after being connected to illegal activity. They also seem to show that landowner the Lake District National Park Authority (LDNPA), a government-run body, took no action.

“Signs of digging with spades”

A freedom of information (FOI) request by Stop Hunting on the Nation’s Land revealed that the LDNPA contacted the Blencathra Foxhounds with concern over the hunt’s conduct on 19 November 2015. A letter dated 24 November 2015 says two LDNPA staff were at Longlands Fell:

when they saw a group of foxhounds in cry together with the sound of a hunting horn and accompanying followers focused on one location 400m away from their position. …

In addition, two quad bikes were seen in conjunction with the hounds and followers.

As the two staff members approached, the hunt moved away. But on reaching the location:

The LDNPA then asked the hunt to account for its actions on the day. 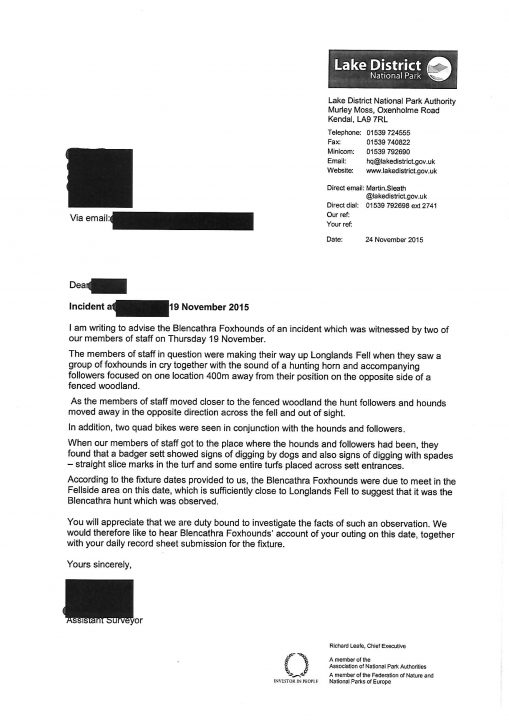 A response by the Blencathra Foxhounds, dated 27 November 2015, says the hunt “decided to lay trails” on the day in question. But while crossing an area named Stockdale earths, the response says:

one hound began to ‘mark’ [a fox] and subsequently, others joined in. Consequently, the Huntsman, with followers, took hounds away from the area using his horn and voice calls… The quad bikes in attendance remained for a brief time to ensure the hounds did not return.

And that is everything about the incident released publicly. The LDNPA also asks Blencathra Foxhounds for its report of the day. But the 19 November 2015 entry is missing from the trove of daily record sheets previously seen by The Canary. 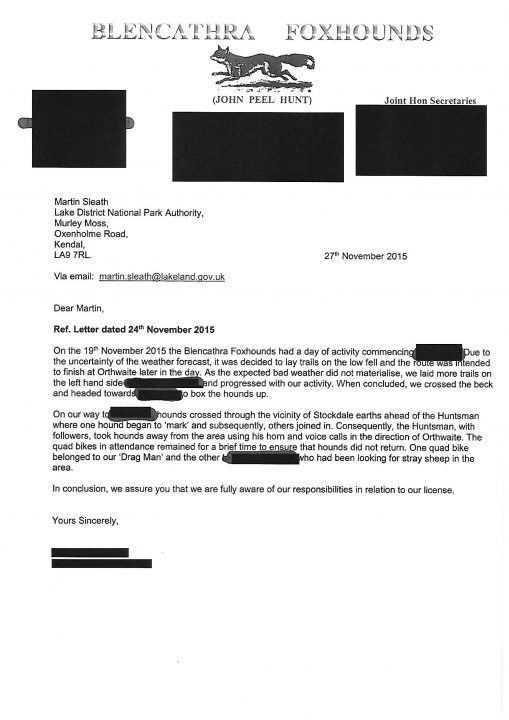 Disturbing a badger sett is illegal

When hunted, a fox will go to ground inside a badger sett to escape hounds. As a result, hunts not only block setts to prevent foxes from escaping down them, but will also dig them out to reach a fox.

The Blencathra Foxhounds’ response to LDNPA doesn’t address the primary issue in LDNPA’s letter. While it explains away the horn and voice calls, as well as the presence of quad bikes, it avoids mention of damage done to the badger sett.

The Canary asked LDNPA if any action had been taken against the hunt following the incident. Property services manager Helen Lancaster said that the two staff involved “were familiar with the area in question and were aware of the badger sett”. Furthermore, the staff “qualified that there was no evidence of recent disturbance to the sett” when reporting the incident. And when asked if the authority had referred it to the police, Lancaster said:

Following internal investigations of this matter it was concluded that there was insufficient evidence of an incident of disturbance or other infringement of the Protection of Badgers Act 1992 that would warrant a report being made to the police.

A second set of documents accompanied the LDNPA’s response. They show the authority was keen to get a response from the Blencathra Foxhounds. Assistant surveyor Martin Sleath said a letter to the hunt was needed “pretty urgently”. Sleath also said in an email that the hunt “will obviously put up a robust defence so we need to be certain of the case”.

It seems clear from the documents that the LDNPA took the incident seriously. But it also raises a further question. Given Sleath’s concern over the accuracy of the information, why did LDNPA ask about sett damage if its staff reported the disturbances weren’t recent?

Among the second batch of documents is an earlier draft dated 23 November 2015, the day before the final letter was sent. It is much more forthright in asking the hunt to account for itself. After stating the damage done to the sett, it includes the following paragraph:

LDNPA removed this from the letter sent. It also removed a statement that trail hunting licences don’t permit quad bikes:

The Canary asked LDNPA if any action had been taking against the hunt over this incident. Lancaster only responded regarding police action. The Blencathra Foxhounds were also contacted about the allegations in this article but no reply was recieved at the time of publishing.

Digging out foxes is one of the cruellest parts of hunting. It’s analogous to badger baiting, which has been banned since 1835. And in practice, it amounts to little more than dogfighting. It’s incredible, then, that the incident didn’t prompt LDNPA to further scrutinise the Blencathra Foxhounds. In fact, according to the daily record sheets, the hunt was back on LDNPA land on 15 December 2015. The authority has welcomed the hunt onto its land every season since.

In conjunction with the hunt’s gratuitous chasing and killing of foxes, it appears as though the Blencathra Foxhound can offer any old explanation for its activities. Fortunately, Lancaster Hunt Saboteurs and Stop Hunting on the Nation’s Land continue holding the hunt to account.