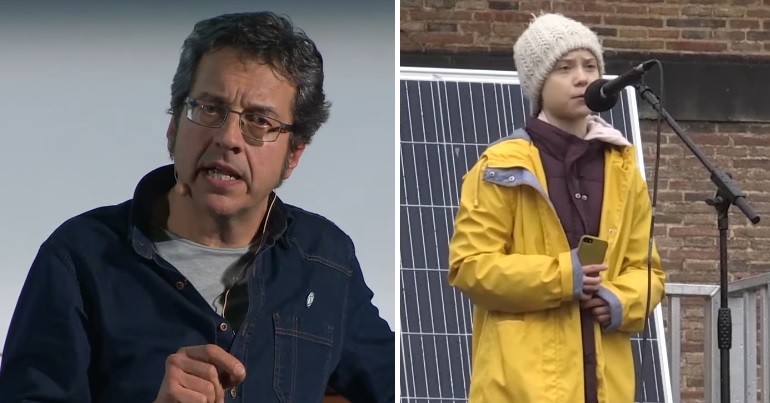 Greta Thunberg joined climate strikers in Bristol on 28 February. The trolls came out in force on Twitter to complain about the ideas and actions of the well-known climate activist.

Recently, meanwhile, a debate forum called Intelligence Squared released a video of George Monbiot. In it, the Guardian journalist and environmentalist explained just how incompatible the capitalist system is with a healthy and sustainable planet.

People shouldn’t see these two events in a vacuum. Because Monbiot’s insight makes sense of why many alleged adults rush to social media, en masse, with their virtual pitchforks upon hearing about a concerned 17-year-old.

Pitchforks at the ready

As a number of people noticed, Thunberg trended on Twitter ahead of the Bristol event. But the interest in the activist wasn’t all positive:

Imagine a world where a young girl seeking to help our planet survive is relentlessly bullied, shamed and trolled. Then open your eyes and ears. I'm with you #GretaThunberg

#GretaThunberg is currently trending, not because she's a leading voice in raising the alarm about impending climate catastrophe, but because a bunch of boomers are complaining about being made to feel like they've trashed the planet for all humanity. Which they have.

Not all ‘boomers‘ complained about Thunberg, however:

I am a Boomer and am pleaded that #GretaThunberg is waking up those who hold power in politics and business about the havoc being reeked on everyone’s future.We Boomers need to be more mindful about how we carry out our lives to protect the future. Young people must have a voice. https://t.co/a0o0VECXW8

I am 56, and think @GretaThunberg is wonderfully inspiring. #GretaThunberg was the catalyst to make people in government know what the young think. Older gens, know one day, #greta's will be voters. More power to #greta I say. #ClimateEmergency #ClimateStrike

Before the Bristol event took place, meanwhile, Avon and Somerset Police warned parents that safety measures would be inadequate there due to the level of attendance. The force said there was “potential for trips, slips, falls and crushing”. And there’s nothing like parents thinking their kids might get crushed at an event to dampen enthusiasm and attendance.

In the debate video, Monbiot argued that a widespread, entrenched system has caused the climate crisis. It’s a system that most of the trolls – and the police – have lived within their whole lives. So perhaps the vilification of Thunberg and the climate movement isn’t surprising. Because it represents a challenge to what many have long believed is the only way of life.

The system Monbiot took aim at is capitalism. He explained this as:

an economic system… where the means of production are privately owned for the purpose of generating profits and accumulating wealth… the general commodification of land, labour, and money.

He also defined what he means by “climate collapse”:

Climate collapse is what happens somewhere north of 1.5C of global heating above pre-industrial levels.

The UN Intergovernmental Panel on Climate Change (IPCC) released a climate report in 2018 that concluded global warming must be kept to 1.5°C at the most, around half a degree hotter than right now, if we are to limit the most severe effects of climate breakdown.

The increasing levels of greenhouses gases like CO2 in our atmosphere push up the temperature of the planet. We’ve now seen a dramatic increase in CO2 levels for eight years running. As a result, the average temperature increase in 2019 reached 1.1°C. That warming leads to ever more extreme weather events – such as the Australian fires – which, in turn, pushes CO2 levels and global heating up further. Such weather events also degrade the ecosystems we rely on to limit the climate havoc humans reek.

Monbiot argued that this downward spiral towards climate collapse is inevitable under a capitalist system. Because, he says, capitalism has “three essential and intrinsic features” that drive us in that catastrophic direction.

The first is growth, without which “capitalism is deemed to fail”. Monbiot asserted that:

He noted that countries may take steps to limit their environmental damage, but argued that:

trying to cut your impacts, while your economy is growing, while resource consumption is growing, means running down the rising escalator

Second, Monbiot highlighted another “central feature of capitalism” which dictates that:

the money in your bank account equates to your right to own [or consume] natural wealth.

Monbiot said this feature ensures “those with the money take the lion’s share, depriving other people”. As such, growth is built again into the system, to generate the further wealth needed to sustain those without money.

Finally, the journalist raised the “promise” of capitalism that “everyone can aspire to private luxury”. Monbiot said:

There’s simply not enough environmental space for everybody to aspire to private luxury. …

The richest 1% in the world use 175 times as much carbon as the poorest 10%. Is everyone supposed to use the same amount?

Put down the gun

Monbiot concluded that these three critical features of capitalism make the system a “gun pointed at the living world”. He called for us to replace it with one of “private sufficiency” and “public luxury”, saying “there’s enough for everyone as long as we share it”.

His argument is compelling. Especially as we watch in horror as the natural world collapses amid flames and floods. But the idea that sharing should replace personal wealth as a measure of success may not instantly resonate with everyone, particularly in the northern hemisphere. A number of companies, especially larger ones, will also balk at the notion that growth is a bad thing. Because, in both cases, the current capitalist system has conditioned them to believe the opposite is the natural order of things.

Perhaps that too explains why Thunberg, as the most visible figure in the youth climate movement, faces such indignation. She is, like Monbiot suggests, calling for them to put down a gun they’ve been holding onto their whole lives.

Ultimately, though, even if the hearts and minds of civilians change, there can be little progress towards a better climate future until the people who wield power stop forcing capitalism upon us via global and national policy.