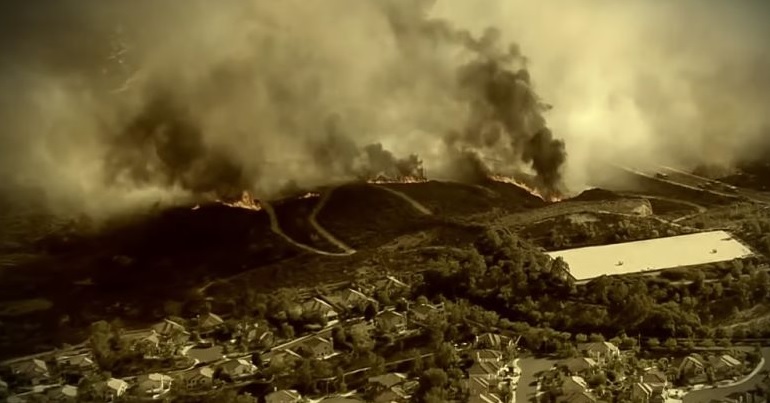 A stunning 2012 animation has resurfaced following the UN’s sobering report on the climate breakdown. Simply titled Man, it explores humanity’s relationship with the natural world.

Given the existential challenges raised in the UN report, it’s not surprising the video is currently adding to its 29 million plus views on YouTube. It’s essential watching for anyone wondering what on Earth humankind has done to deserve the catastrophe it now faces.

The UN Intergovernmental Panel on Climate Change (IPCC) released its climate report on 8 October. It concluded that global warming must be kept to 1.5°C at the most, half a degree hotter than right now, if we are to limit the most severe effects of climate change. The risk of large-scale food scarcity, poverty, species loss and extreme weather, among other things, becomes more certain at 2°C, the group of UN scientists found. According to the report, we don’t have much time left until we reach the 1.5°C limit. It reads:

In short, the IPCC says 0.5°C more warming will bring some pretty dire consequences: rising seas, droughts, further loss of biodiversity and more. But hitting 2°C would be catastrophic, with potentially hundreds of millions more people forced into climate-related poverty and the species we depend on for pollination under threat of severe habitat loss. As the IPCC’s Debra Roberts said of the report:

So, the IPCC looked to the future and found that it’s not bright. At all. Steve Cutts‘s Man, however, primarily looks to the past to see how we got here. The animator’s chronicle of humanity’s interaction with nature for the last “500,000 years” isn’t any brighter. But it does speak volumes about why “this is the moment” we’ve been asking for.

Cutts’s animation begins with a man’s arrival on a beautiful planet Earth. It follows that man’s journey across this new territory and his dealings with the other life in it. Clearly, the man views each new creature in terms of its usefulness to him. So, if he can’t wear it, fry it, mount its head on a wall or use it for entertainment, he kills it. Meanwhile, the Earth itself gets no better treatment than the animals. Everything’s butchered to suit the man’s needs. In the end, he’s sat atop a wasteland. That’s Cutts’s story of our lives.

Cutts’s assessment of humanity’s journey is hard to argue with. Indeed, in 2017 scientists reported that the “biological annihilation” of wildlife over the past few decades has triggered the world’s sixth mass extinction event. They say this extinction event is caused by humans and amounts to the “erosion of biodiversity and of the ecosystem services essential to civilization”. That means our failure to appreciate the living world for anything other than its usefulness to us will eventually be our end. Go humanity.

There is, of course, another way. We can choose to reject that inhumanity is the necessary price of a tasty steak or milk and eggs to accompany our morning coffee. We can turn our back on educators who show no regard for our children’s futures by investing in fossil fuels. We’re able to dump dirty energy companies as well. We can learn through the internet about who is blocking our path to a sustainable world. Most of all, we can cast out political representatives who prioritise their donors, and their own, bottom line over our world. We can also ditch their rotten, corrupt systems too.

We can become a species to be proud of. And we can salvage this beautiful, diverse world. We just have to make the choice, in droves, to do so. As Roberts says “this is the moment”. Let’s seize it.