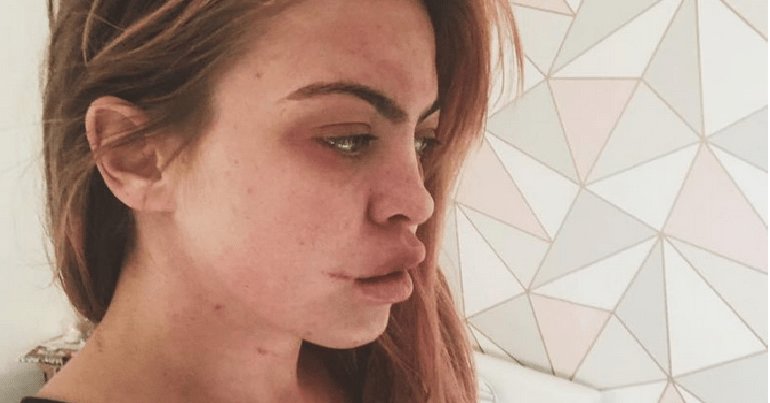 A young mum was recently admitted to hospital and suffered concussion for five days. Thugs brutally attacked Jade Unal after she had attended a Labour talk on Brexit, forcing her and her daughter into temporary accommodation. They left Unal needing stitches and bloodied up.

She told the Mirror:

They were calling me a ‘Labour c***’, a ‘posh snob’, ‘you think you’re better than everyone else’. They said they knew where I lived. It was horrific.

Before I knew it they were laying into me, screaming. They knocked me out and kept on kicking me even while my mum tried to defend me.

Now, the young Jeremy Corbyn supporter has released a statement. And she has slammed the right-wing media for ‘encouraging’ the political hatred that is leading to such violence.

Unal: Attack rooted in the “unfettered hate speech” amplified and ‘encouraged’ by the right-wing media

In a statement seen by The Canary, Unal slammed what she believes are the roots of the violence:

The right-wing media, Brexit, Trump, the Conservatives, BNP, UKIP, Britain First and the EDL have contributed to this level of growing hatred. When will people be held responsible for their unfettered hate speech, which encourages others to think they can use violence if they do not agree with others’ political views?

And the thing is, corporate journalists don’t tend to hold these hate preachers to account. The media appearances often merely amplify their views.

“Do we only care about high profile MPs in the party?”

At a time where women’s representation in politics is necessary and desired (for example through an all-women’s shortlist) and such a short time after the killing of Labour MP Jo Cox, it is appalling that a female Labour Party member can be violently beaten in public because of her political campaigning, and then result in abject silence from the Labour Party itself. Do we only care about high profile MPs in the party?

I joined the Labour Party because Jeremy Corbyn opened my eyes to a socialist world; a world I not only wanted [to] be a part of, but to actively help form.

I am inviting the Labour Party to take positive and constructive action to support me, before the ongoing threat of violence against me is fatefully realised. I have been forced from my home into emergency accommodation, with my daughter. My life has come to [a] complete halt. The perpetrators of this crime [are] still living their life freely. I need support with this crime, from the party, because the only reason I was targeted is because I am a party candidate.

Mary Creagh, Labour MP for Wakefield, said of the situation:

I am working with [Unal] to make sure she gets [the] support she needs.

The Canary has also approached the Labour leadership for comment on the matter. But we were later informed that the person contacted was out of office at the time of publication.

The simple fact is that thugs left a prospective Labour representative concussed. And that surely warrants high-profile support from the party.

Political violence against anyone is an attack on the democratic freedoms of everyone.

With the murder of Jo Cox in mind, the terrorist attack on Unal is very concerning. Corporate media outlets need to think twice before broadcasting the views of hate preachers without properly holding them to account.