The Department for Work and Pensions (DWP) announced its new director of communications on 9 October. But she’s not really a ‘new broom’. Because she worked with Conservative politicians for years. She was even a special adviser to former work and pensions secretary Iain Duncan Smith. But that’s not the worst part.

The DWP: a new broom?

Lisa Hunter is the DWP’s new director of comms. A press release said she will:

I’m delighted… [she] is joining DWP as Director of Communications. She brings a wealth of experience from across the public and private sector.

Indeed, Hunter does have a “wealth” of public sector experience; the majority of it being for Conservative politicians.

As her Linkedin profile shows, Hunter did a politics degree before doing a diploma in broadcast journalism. She had a brief stint as a presenter on a Welsh radio station. But she went on to work for the Conservative Party, and then as a special adviser to two secretaries of state: 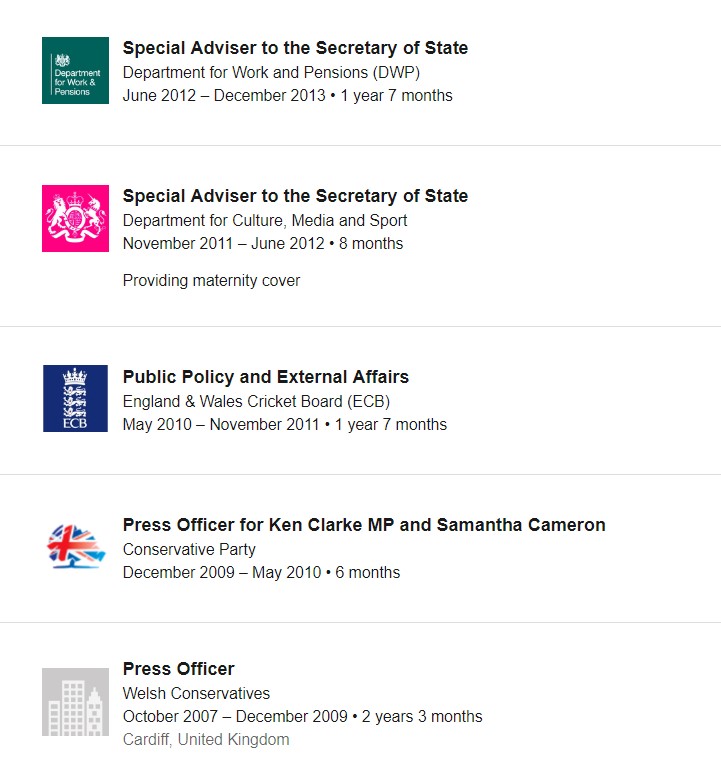 Her job as a special adviser for Duncan Smith is interesting. Hunter was at the DWP when the changes made in the Welfare Reform Act 2012 were being put into place. These include:

But Hunter is also part of that ‘revolving door’ between government and corporations.

After several years at insurers Lloyds of London, Hunter then worked as a corporate affairs director (lobbyist) for MHP Communications. The firm is a known corporate lobbyist for both energy and health; with former MPs and their advisers going to work for it.

As Private Eye wrote, former secretary of state for energy and climate change Ed Davey agreed to the contentious Hinkley Point C nuclear power station; to be built by EDF. When he lost his seat as an MP, he went to work for MHP; the firm lobbies for EDF. What’s more, as the Morning Star reported, MHP also lobbied for private rail. And several former right-wing mainstream media journalists also work for it.

The Canary asked the DWP for comment. It pointed us to its press release.

Hunter said of her new job:

The work we do in the… [DWP] makes a real difference to millions of people and families, right across the country, and often during their most challenging times…

We play an important role in creating a fairer society and it’s vital we communicate all we do effectively and accurately.

She must have missed the ongoing scandal over Universal Credit, or the numerous benefit cuts. Hunter apparently overlooked the flawed Work Capability Assessment and the closure of the Independent Living Fund. And she seemed to forget the thousands and thousands of people have died on the DWP’s watch. She clearly hasn’t read the five international reports that slammed governments and the DWP.

So, the DWP has a new director of comms. One who went from doing PR for the Conservative Party to advising Duncan Smith on welfare. She then went to lobby for private companies. And now she is back at the DWP to sell its policies to the public.

But just to complete this story of revolving doors, Hunter’s old firm MHP also lobbies for ATOS; a firm mired in scandal over its role in welfare assessments. It’s certainly a case of not what you know, but who you know, in the world of the DWP.