The DUP leader gets called out for hypocrisy, but it's hardly the first time - Canary 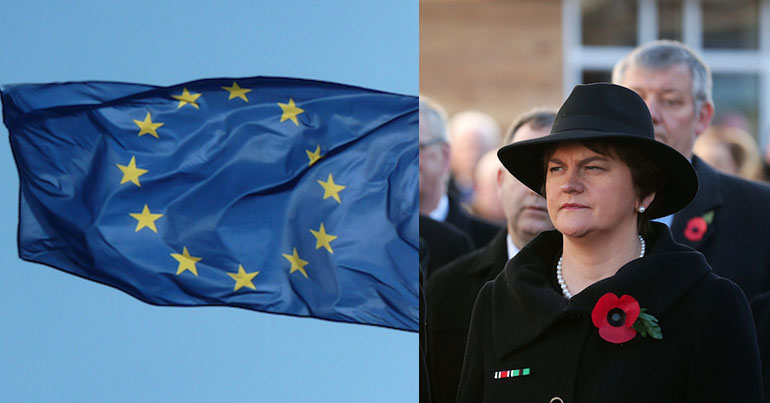 While reports of the Democratic Unionist Party’s (DUP) hypocrisy are common, it just got called out for taking hypocrisy to a whole new level.

Arelene Foster: "There is only one red line… when we are treated differently from the rest of the United Kingdom"

The reaction online was swift:

Quite right, Arlene Foster! Northern Ireland cannot be treated differently from the rest of the UK! It’s a red line*!

A new kind of DUP hypocrisy

But Foster’s demands highlighted a new kind of hypocrisy. And this time it’s the government’s backstop plan. This plan attempts to prevent a hard border between the north and south of Ireland after Brexit. So Foster demanded to see the legal text of the plan:

What we need to see is the legal text.

And this left social media users confused. Because they wondered why Foster suddenly wanted to read legal text. After all, she admitted to not reading legal regulations governing a renewable energy scheme in her department. As The Canary previously reported, this scheme could cost the taxpayer over £700m. And it’s currently before an inquiry.

Sinn Féin politicians took to social media to point out the blatantly obvious:

Arlene Foster is in Brussels demanding to read the text of any Brexit deal. When asked at the RHI Inquiry if she had read the text of the RHI regulations before asking MLAs to vote for them she said “No. No, I didn’t…..I didn’t read the regulations.” pic.twitter.com/acCRXHFBwg

Others pointed out the hypocrisy of Foster taking so long to decide:

I love the way Arlene Foster says she needs to see the text of the deal BEFORE deciding. Yet the rest of us had to decide 2 YEARS AGO, before any sign of a deal.

Who is Arlene Foster speaking on behalf of? Does Arlene Foster forget that she’s not the First Minister and The North voted to remain? Who is she representing? Certainly not The North.

Theresa May's boss, Arlene Foster is heading to the EU to negotiate 'blood red lines' for a Brexit deal. The DUP leader represents 13% of Northern Ireland and much less than 1% of the UK. This is deinifely NOT taking back control… #BrexitShambles #StopBrexit pic.twitter.com/rC6aT5eX4D

And they noted that Foster leads a party absent from government in Northern Ireland for almost two years.

As the DUP supports Brexit and props up Theresa May’s government, it’s holding British people to ransom. In addition, its Brexit position is both hypocritical and in the minority. The British people deserve better leadership.