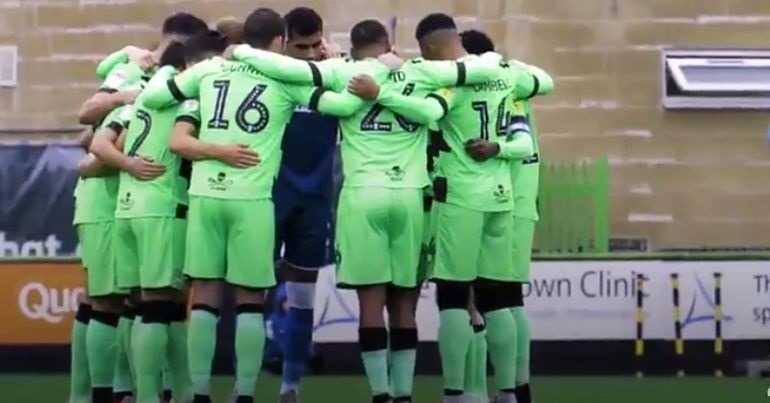 One English football team is showing the UK government how to get shit done. And it’s trailblazing its way into the history books. According to FIFA, Forest Green Rovers (FGR) is now “the world’s greenest football club”. The Gloucestershire club’s choice to serve a 100% vegan menu, use green energy and play on an organic pitch have contributed to it earning that title.

After a recent UN report predicting catastrophic climate breakdown without measures to limit global warming, the club’s efforts are exactly what our country needs. If only the UK government would follow suit. Instead, it appears to be moving in the opposite direction.

FGR has been around since 1889. But the founder of Ecotricity, Dale Vince, came onboard in 2010 while it was experiencing financial difficulties. Since then, its environmental credentials have gone from strength to strength:

This soccer team plays in a stadium that is completely vegan, sustainable, and carbon neutral pic.twitter.com/VgmrmMCLwh

The team went completely vegan in 2015, with players, staff and fans all feasting on plant-based food when at the club. On its website, the club explains:

FGR became the world’s first vegan football club because of the huge environmental and animal welfare impacts of livestock farming, as well as to improve player performance and give fans healthier, tastier food on matchdays.

FGR has also implemented the EU Eco-Management and Audit Scheme (EMAS). The European Commission developed this initiative as a way to encourage organisations to improve their environmental performance. Alongside its use of green energy and an organic pitch, the club has made efforts to increase biodiversity around its football ground, installed electric vehicle charge points and solar panels.

Blowing up the world

Of course, Vince’s involvement in the club – as a sustainable energy entrepreneur – puts it in a good position to clean up its environmental act. But the UK government is in an even better place to do so because it controls policy. And it has vast sums of our money at it disposal to make necessary changes.

Yet the government appears to be moving in the opposite direction to FGR. It’s scrapping renewable energy projects while it’s approving those that will drive up pollution. It appears determined to move forward with fracking, despite massive public opposition. In fact, it even seems willing to risk earthquakes in Britain to ensure fracking goes ahead.

We’re at a point where a football club is making more responsible decisions than the government. What a state we’re in.

– Be part of the renewable energy revolution.