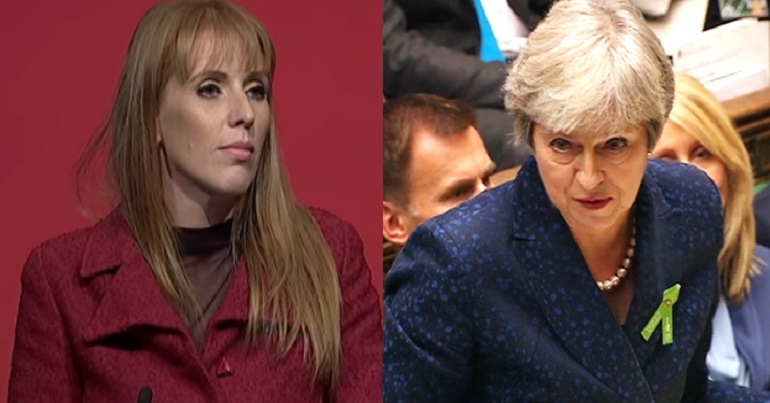 Labour’s shadow education secretary Angela Rayner accused Theresa May of a “breach of the ministerial code” during Prime Minister’s Questions (PMQs) on 10 October.

During PMQs, May claimed that:

School funding this year is at a record high… we now see 1.9 million more children in good and outstanding schools… compared to 2010. And part of that is because of the reforms we’ve put forward into education…

The PM may regret the 1.9 million children claim, though. Because as The Canary previously reported, the UK Statistics Authority (UKSA) is looking into claims made by education secretary Damian Hinds and schools minister Nick Gibb.

Hinds made the same claim as May during his Conservative Party conference speech. But as Schools Week noted, the Education Policy Institute (EPI) has dissected Hinds’s claim before:

The [EPI]… wants this often repeated statistic to “gracefully depart” as it does not take into account population growth, changes to the nature and frequency of Ofsted inspections, or changes in school governance after academisation.

As HuffPost reported, Rayner wrote to the UKSA asking it to investigate Hinds’s claim. She said:

The Tories have once again been caught repeating utterly discredited statistics in a desperate attempt to deny the facts facing Britain’s schools. If they really want excellence in maths, they could start by making sure their own numbers add up.

Then, on 8 October, the UKSA wrote to Hinds. It said of the 1.9 million children claim:

While accurate as far as it goes, this figure does not give a full picture… as an earlier letter to the Department from the Office of Statistics Regulation pointed out.

I am sure you share my concerns that instances such as these do not help to promote trust and confidence in official data, and indeed risk undermining them.

Yet despite all this, May felt it OK to repeat the 1.9 million children figure anyway.

Another day in the Conservative government

What is it with the Tories and dodgy statistics? The PM claims that “1.9m more children in good or outstanding schools” ?This is one of the dodgy stats that has been criticised! #PMQs #ToryFail

Excellent work from @TracyBrabin in raising a point of order after #PMQs in which she rightly says that the PM repeated the 1.9 million children in good or outstanding schools which only this week has been proven to not be the full truth. https://t.co/d7Ogj2fSfk

This is a clear breach of the ministerial code and we demand that the PM correct the record and apologise for the wildly misleading statement. https://t.co/jtQVdYEvSP

But so far, there’s been silence from the PM and her office.

Judging by Rayner’s furious response, though – May won’t be getting away with this that easily.