£2m on another royal wedding, yet people are still homeless in Windsor - The Canary 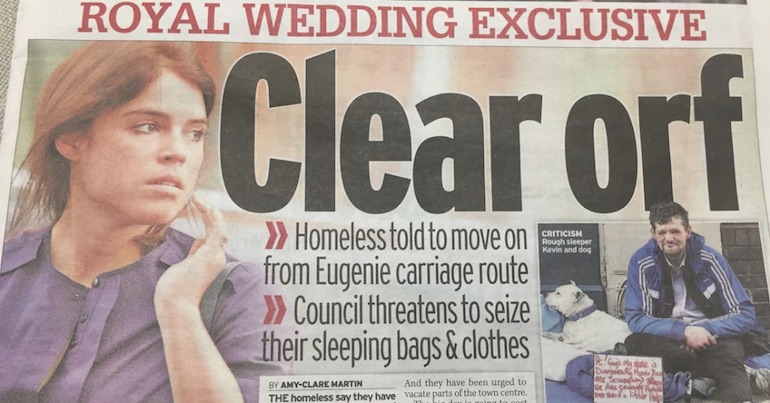 Homeless people have reportedly been targeted in an attempt to ‘clean the streets’ ahead of the wedding of a very minor royal. It’s the second time in only five months that homeless people in Windsor have been targeted. And yet the £2m cost of security for the ‘big’ day would at least start to tackle the rising UK homeless crisis.

The Mirror reported that homeless people in Windsor have been told to move. One homeless man called James said:

They are saying… we’ve got to not be around when it’s taking place.

Basically, they want the streets clear. It’s as if they want to make it look like there aren’t any homeless people in Windsor.

Must be a lot of spare bedrooms in Windsor Castle if they want the homeless off the streets. Let’s use them for the many not the few pic.twitter.com/fLtdUUe8dv

In January, councillor Simon Dudley suggested that police should completely remove homeless people in Windsor for Prince Harry’s wedding. Although this didn’t happen, homeless people were forced to hand in their few possessions. Five months later, here we are again. This time, for Princess Eugenie’s wedding.

Eugenie performs no public duties. But taxpayers will pay an estimated £2m for security, and £250k for the ‘clean up’.

The Mirror shared this story on the eve of World Homeless Day, and many people shared their outrage:

Today is #worldhomelessday2018 meanwhile homeless people in Windsor have been told to remove themselves and their belongings ahead of yet another royal wedding. Disgusting.

Absolutely abhorrent that the royals want the homeless of Windsor hidden for the wedding day… 2 million on the wedding & throw the homeless back onto the streets after? Disgusting! Homeless are human not animals. #RoyalWedding #Eugenie know yourself little girl ?

On #WorldHomelessDay the @Conservatives Windsor council tell homeless people to move their belongings for a wedding that will cost the taxpayer £2 million pounds & £250,000 to clean up afterwards. Every time you think the Tory Party cannot get any lower.. https://t.co/stVIuPYIVX

Windsor council has since denied these allegations. It insisted they’d advised ‘vulnerable’ people to “move to other locations within the town centre”.

But this denial simply hides the bigger picture of the UK’s homeless crisis. Since 2010, the number of people sleeping rough in the UK has risen 169%. And in just 12 months, “at least 449” homeless people died.

Windsor has a Tory-led council, and since the last royal wedding, nothing has changed. In fact, many in the Mirror story seem to be the same people who were homeless five months ago:

Since that Tory Cllr commented on Windsor rough sleepers we've seen images of street homeless. 10 months later and a second royal wedding & the same homeless people are photographed. I know it's complicated but surely more could've been done to help them?! https://t.co/1gRkUuBEdq pic.twitter.com/VQX13rv6vn

And £2m to fund a minor royal in austerity-ravaged Britain is an insult:

Millions in Britain are suffering under #ToryAusterity. So if the Government has a spare £2 million, how would you prefer it was spent?

On a carriage ride for a non-working minor royal, or on the #homeless they propose to cleanse from the streets of Windsor? #RoyalWedding

Who the fuck is Princess Eugenie.. And why the fuck are taxpayers getting shafted 2 million for her wedding… Yet they're moving homeless people away from the Windsor area… Spend the 2 million on the homeless and pay for your own fucking wedding!

This wedding exemplifies everything that is wrong with this country under the Tories and an outdated, overprivileged monarchy. It’s time for change and time for a revolution.

– Also, read about and honour the 449 homeless people in the Bureau report.