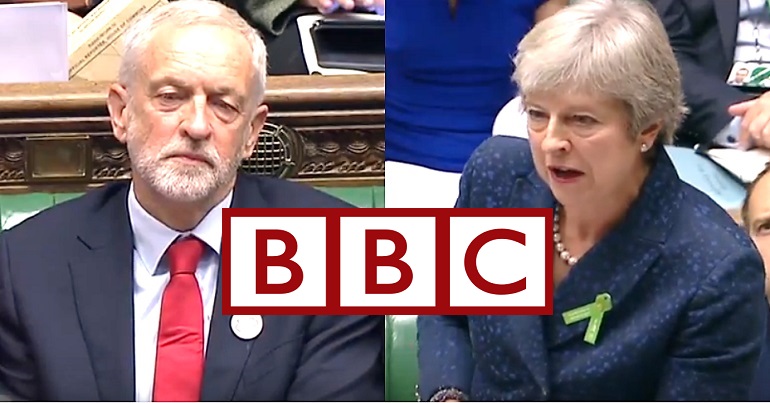 The BBC made a bit of an own goal with its fact-checking service on Wednesday 10 October. Because when it attempted to ‘reality check’ Jeremy Corbyn’s use of figures, it actually used outdated figures itself. Altogether now: ‘aww!’

PMQs: May on the ropes

The Labour leader put it to Theresa May that:

today is World Mental Health Day. And today, there are 5,000 fewer mental health nurses than there were in 2010. The Prime Minister said last week that ‘austerity is over’. When will austerity be over for the mental health services?

A squirming May spluttered:

How many more times May could say the word “health” is unclear. But Corbyn claimed it was Labour which forced the Tories into giving parity of esteem to mental and physical health. The Canary fact check shows it was actually a crossbench peer, Lord Patel, who first introduced this, although Patel did work for the Labour Party.

But the eagle eyes of Evolve Politics were on hand to give the BBC a ‘reality check’ of its own:

As of June 2018, there were 5,045 fewer mental health nurses – as Corbyn stated. Yet the BBC chose to use April's figures instead. https://t.co/ZtIyXghMzp https://t.co/PXL4u5hlLT

Why use old figures when June 18 figures are available? The decline since April has continued and for the record is now 5,045 fewer.

Some threw some sarcasm into the mix:

I am pleased to see you agree (accounting for a little rounding up) with Mr Corbyn assertion. Er, you are agreeing, aren't you?

But Rabble Cat made the best point:

But hey – at least the BBC is trying. It’s just a shame that it takes indy media and Twitter users to prove how crap at fact checking it really is.