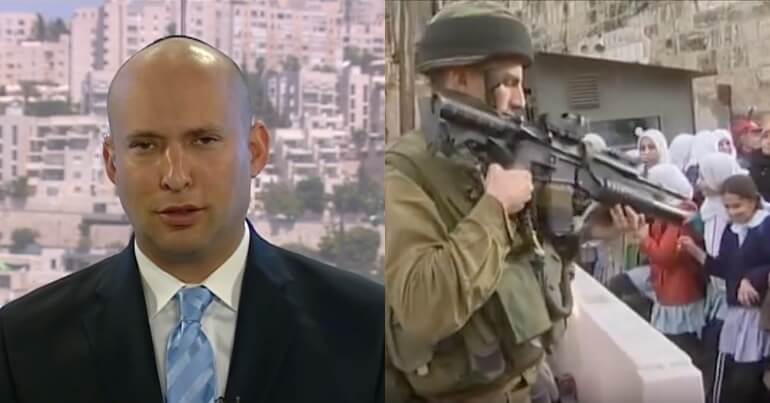 Israel’s education minister Naftali Bennett has stated in a radio interview that he would implement a “shoot to kill” policy against Palestinians, including children.

Bennett’s comments came in response to Israel’s Army Radio, which asked him what he would do differently compared with current defence minister Avigdor Liberman.

Bennett was then asked whether this “shoot to kill” policy would be applied to Palestinian children, to which he replied:

They are not children — they are terrorists.

The Canary has previously reported on Bennett’s disturbing ideas. Earlier this year, he also said the army should kill anyone, including children, sending ‘incendiary devices‘ over the border. In the discussion between Bennett and military chief Gadi Eisenkot, Bennett stated:

Why not shoot anyone who launches aerial weapons at our communities, and at the cells? There is no legal impediment. Why shoot next to them and not directly at them? These are terrorists for all intents and purposes.

Bennett continued by asking whether they could target those who are “identified as an adult”. Eisenkot replied:

Are you proposing to drop a bomb from a plane on incendiary balloon and kite cells?

The education minister reportedly confirmed that this was exactly what he was asking.

Bennett has also affirmed that he isn’t prepared to return any Palestinian land or appease worldwide pleas to free the Palestinian people:

I would not give another centimeter to the Arabs. We have to drop the idea that if we give them more territory the world will love us… The defense minister is ready to give up Nokdim, his home, for a Palestinian state. I am not prepared to do this.

The killing of children, such as those targeted in Palestine, goes against international humanitarian law.

In his exchange with Bennett, Eisenkot stated:

But despite these words, Israeli forces have killed children; the most recent case being 13-year-old Faris Sarsawi, who was shot dead at a border protest just a few days ago. And Israel’s 2014 assault on Gaza alone reportedly killed 521 children.

What is clear is the need for a solution to this situation. In Britain, we need a government that will recognise and stand up for Palestinians, instead of being complicit in their suffering. We need a change, and we need it fast.

– Write to your national or local politicians to share your concerns about the actions of the Israeli government.