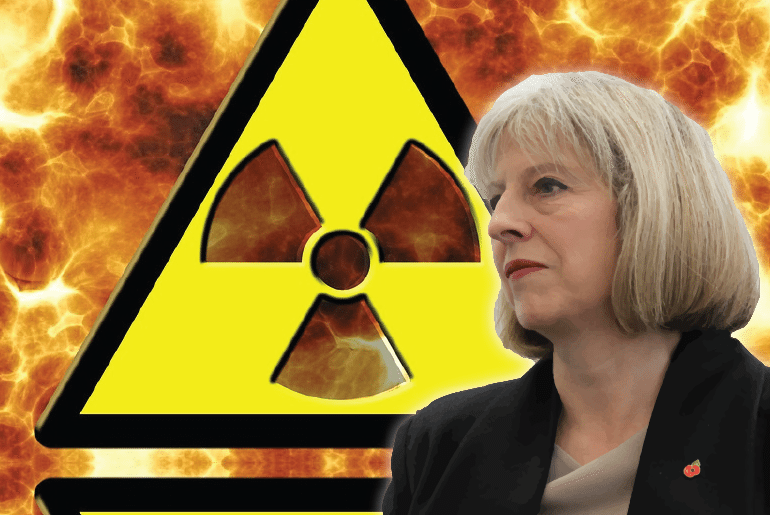 On 15 September, Prime Minister Theresa May officially gave the go-ahead for the controversial Hinkley Point C nuclear power station. After May put the project under review in July, there were rumours that it might be cancelled. But today’s sudden announcement appears to have cemented the deal.

But the move should come as little surprise. Because when you look at who is behind it, and who benefits from it, it appears that the Tories (once again) have their snouts firmly in the trough.

The £18bn new plant in Hinkley, Somerset is being built by French energy company EDF, and financed by both them and the Chinese government. The latter agreed to the financing, in return for approval of a Chinese-led and designed project at Bradwell in Essex. But there are concerns about escalating costs and the implications of nuclear power plants being built in the UK by foreign governments.

The deal been slammed by both Labour and environmental campaigners. Green Party MP Caroline Lucas, meanwhile, has called Hinkley “the biggest white elephant in British history”. She said that it was absurd and disappointing that the deal was to proceed when the government is reducing support for cheaper, safer and more reliable renewable alternatives:

Instead of investing in this eye-wateringly expensive white elephant, the government should be doing all it can to support offshore wind, energy efficiency and innovative new technologies, such as energy storage.

But a quietly released report by Greenpeace shows that the deal was probably always going to go ahead.

EDF: in bed with the government

Analysis done by Greenpeace found that ten advisers and civil servants who worked at the former Department for Energy and Climate Change (DECC) in the last five years had links to EDF. One was recently employed by the DECC and was also a manager at the Office for Nuclear Regulation, the regulator for the nuclear industry. This was before they became a licensing officer for EDF.

An EDF Strategy Manager had a 13-month secondment to the DECC commercial team while working for auditors KPMG. As Greenpeace notes, the DECC commercial team “played a crucial role in deciding to press ahead with the Hinkley project”. It was this team which had oversight on who invested in Hinkley Point C. Additionally, a communications officer for EDF was previously the Senior Ministerial Visits Manager at DECC until early 2016. And a policy adviser and analyst for the now-defunct department had previously done the same job at EDF.

This is on top of the fact that former Liberal Democrat Energy Secretary, Ed Davey, now works as a lobbyist for MHP Communications – where EDF just happens to be a client. As Martin Williams describes in his book Parliament Ltd: A journey to the dark heart of British politics:

When he lost his seat in 2015, he [Davey] went off to join MHP Communications. He had connections with the firm already: MHP acted as lobbyists for EDF Energy, who Davey “had dealings with as a minister”… When MHP’s Chief Executive announced Davey’s appointment he was able to speak candidly about the benefits of employing a former energy minister. “Ed’s unique insight into the energy sector will be particularly valuable to the companies that we work with in that sector. His knowledge of the top-level workings of Britain’s political system will also prove immensely useful to a range of our clients and to MHP itself”.

It was Davey who was responsible for the initial agreement between the government and EDF. But the links to EDF Energy and the Tory government run deeper than the Greenpeace analysis. And go right to the top of the Conservative Party.

Tories: in bed with EDF

Sir Richard Lambert heads EDF’s Stakeholder Advisory Panel. It gives EDF “strategic advice and direction”. Knighted under David Cameron, he’s a non-executive director of the Foreign and Commonwealth Office, acting as lead advisor to the Foreign Secretary. He was in this role under Philip Hammond, who appears to have been crucial in getting the Hinkley deal pushed through. Lambert said of the Hinkley deal:

The Stakeholder Panel will be taking a particular interest in the final investment decision on Hinkley Point C.

Also advising EDF is Dame Helen Alexander. She is a non-executive director at Rolls-Royce, which has £100m worth of contracts at Hinkley, Alexander is also the Deputy Chair of the “women on boards” review. She was appointed by Sajid Javid in February 2016.

Tory peer Lord Patten of Barnes is the former governor of Hong Kong and a former Conservative Party Chairman. But currently, he too sits on EDF Energy’s Stakeholder Advisory Panel. On 9 September, Patten co-authored an open letter to the Financial Times (FT), calling on May to “press ahead with Hinkley Point”.

Also on the EDF panel is Sir Simon Robertson. Another Tory peer, who is a party donor to the tune of £765,000, he was knighted in 2010, just after the Tories came to office. Robertson was also Deputy Chairman of HSBC until April 2016. In 2014, HSBC arranged the financial backing for EDF to carry out the project at Hinkley. Robertson also signed the letter in the FT. He is also a long-standing member of the Tory “Leader’s Group“. This “club” costs £50,000 a year to be a member of and gives access to the likes of May and Hammond at exclusive private dinners.

Hinkley: benefitting everyone, except the public

And in another twist of ‘fate’, it would seem the Prime Minister may well benefit from Hinkley Point C going ahead. May’s husband, Philip, works for investment company Capital Group. It, in turn, has a nearly 10% stake in French company Schneider Electric, which has been awarded a contract at Hinkley.

It would seem that the Tories’ push for the Hinkley project is not driven so much by “energy security”, but more by vested interests.

When you have EDF granted access to the heart of government, former ministers now acting as lobbyists for the nuclear industry, and top-level Conservatives with their fingers in Hinkley’s financial pies, what’s best for the UK goes out of the window. Meanwhile, the cost to every household is around £25 per year extra on the energy bill.

Business Secretary Greg Clark said the deal strikes the “right balance between foreign investment and national interest”. But the only “interests” being served, judging by who’s involved, are those of Tory bank balances.

– Write to your MP to oppose the development.

– Find out when a protest is taking place.