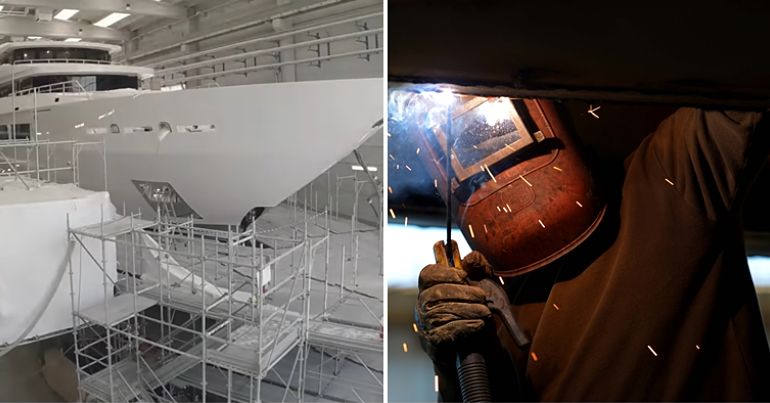 When the UK went into lockdown on 23 March, the government ordered “certain businesses” to close. The exception to this was key providers like supermarkets and retailers offering “essential goods and services”.

And while other businesses can open “where [employees] cannot work from home”, it’s difficult to see how repairing luxury superyachts, as opposed to repairing something more essential to daily life, is justifiable during a pandemic. Because as reported by CornwallLive on 29 April, Pendennis Shipyard in Falmouth recently reopened to do just this.

At the time of writing, figures from the Financial Times estimate that around 48,500 people have died from coronavirus in the UK. And according to figures from Public Health England (PHE), the UK has the second highest death toll in Europe.

Medical and scientific experts criticised the UK government’s handling of the pandemic saying it cost lives. In an article in the Guardian on 15 April, Helen Ward, professor of public health at Imperial College London, said:

It’s now clear that so many people have died, and so many more are desperately ill, simply because our politicians refused to listen to and act on advice.

Ward and her colleagues called for an earlier lockdown and said:

test, trace, isolate. But they decided they knew better.

And with this expert advice and a shocking death toll now public knowledge, it beggars belief how a superyacht shipyard could reopen.

Clearly the manual labour of a shipyard can’t be performed at home. But as people’s health, including that of our frontline staff, is at greater risk, it’s difficult to see it as essential work in any way.

In any case, on 26 March Pendennis Shipyard decided to “reduce all but essential activities at the Shipyard”. It said:

Over the last few days we have been working hard to bring all current projects to a safe and controlled position. The vast majority of Pendennis employees have been asked to remain at home with their families until it is safe to return to work.

But Pendennis Shipyard’s joint managing director Toby Allies decided to reopen after consulting with a marine sector trade association and Conservative MP for Truro and Falmouth Cherilyn Mackrory. The Canary contacted Mackrory for comment but received no response by the time of publication.

Pendennis Shipyard Ltd is a member of British Marine. According to its website:

British Marine is the trade association for the UK leisure, superyacht and small commercial marine industry.

Its site reiterates the advice to:

avoid non-essential contact, stop all unnecessary travel and work from home wherever possible

Work of this nature is not essential. The government must demonstrate that it’s putting people’s lives front and centre by putting a ban on such work. Immediately.

The company, in turn, must do the honourable thing and furlough its employees through the coronavirus job retention scheme (CJRS) so they can still have some income. A time of global crisis is not the time to serve the needs of the super-rich.