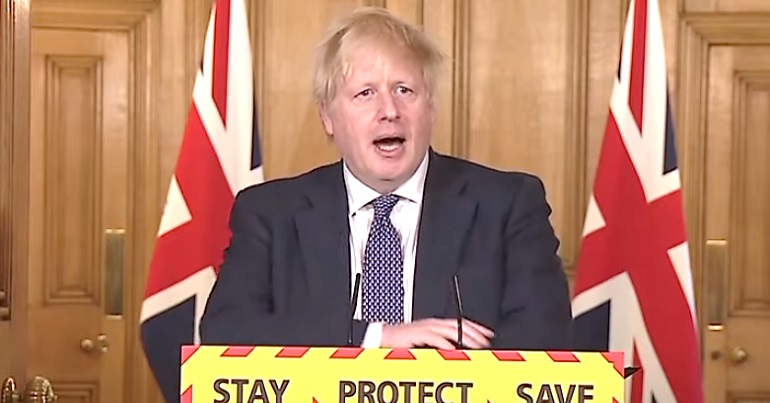 Not known for his ability to think before he speaks, Boris Johnson has trotted out numerous mindless platitudes during the coronavirus (Covid-19) pandemic. But his latest nugget of steaming hypocrisy was so bad it nearly broke Twitter.

Back from hospital, but seemingly not on paternity leave, Johnson tweeted:

Thank you for all that you are doing to save lives and protect our NHS. Let’s keep going. pic.twitter.com/mpQ3PSbcix

Suffice to say, a lot of people took issue with Johnson’s sentiment. At the time of publication, his tweet had had nearly 800 comments. Rachael Swindon was so incensed she tweeted not once, but twice about the PM’s insipid statement:

You actually said people would learn to value the NHS more if they had to pay for it.

Do you realise how many people you and Dom have slaughtered with your strategy?

Seriously man, get in the bin.

Free healthcare should be only for "those who are genuinely sick, and for the elderly." – Boris Johnson.

“If people have to pay" for NHS services, "they will value them more." – Boris Johnson https://t.co/clO3YdMqjq

Yes, back in 1995 Johnson allegedly wrote in a column for far-right libertarian rag the Spectator. Business Insider claimed this said that:

If people have to pay for them, they will value them more.

And Johnson allegedly wrote that people who say, “in the future the NHS should be for those who are genuinely sick, and for the elderly” were “bang on the nail”.

If people were having to pay for some NHS services, fortunately, the PM’s own recent stay in hospital probably would have still been free. Not that Johnson needs free healthcare, given the website Celebrity Net Worth puts his personal fortune at $4m.

But regardless of whether we should have free healthcare in the UK, other people took issue with the PM over his handling of the pandemic.

1. In February #BorisJohnson made his now notorious 'superman' speech about Britain 'staying open' even if a pandemic hit
2. In March he dismissed all notion of closing our borders to #Coronavirus hotspots
He's no 'hero' or 'leader', the decision he made then are haunting us all

Meanwhile, someone else pointed out the scandal surrounding the government’s testing record. As The Canary reported, not least in this is health secretary Matt Hancock’s false claim (or ‘lie’ if you prefer) that the Tories had hit their 100,000 tests a day target:

Is that the massively underfunded NHS your government has taken to breaking point before you realize that you actually need them and the excellent job they do. Open you eyes @BorisJohnson look what you and your @Conservatives government have done.

More specifically, the Tories presided over near-historical low funding for the NHS. This, in part, has led to what Twit pointed out: the crisis in PPE:

When you going be doing your bit? Not fudging testing figures, supplying PPE and funding local government and nhs properly and apologising to the public for the 2nd highest death rate in the WORLD

the government… told NHS staff they were safe to wear less protective aprons and basic surgical masks in all but the most high risk circumstances.

Now, it seems that this guidance was at best flawed. At worst, the government has put NHS staff’s lives at risk.

Johnson: does he have “a clue”?

But it was Robert Hutchison who perhaps summed the whole, sorry mess up the best:

There’s probably a lot of people asking a similar question to Hutchinson right now. In the aftermath of the pandemic, any functioning democracy would instigate a public inquiry into the Tories mortal failure to manage this pandemic. Whether the people of the UK will demand that or not remains to be seen. Maybe, we might have another general election for the Tories to lie and cheat their way through. Or possibly, we might just see a new PM once the dust settles.

Pay me his salary and I'll give it a good go….

The way Johnson is running things at present, Hutchison’s offer doesn’t seem like too bad an idea.