A new campaign is challenging UK complicity in Israeli apartheid, and it really means business - Canary 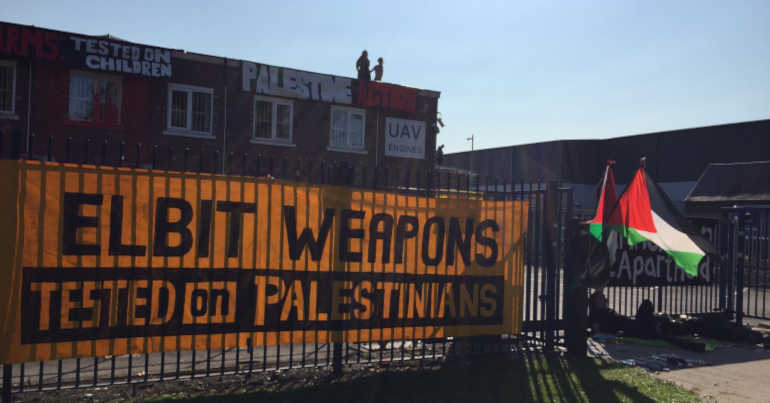 In the early hours of the morning of Monday 14 September, a group of Palestine solidarity organisers set up a blockade at the gates of an Israeli arms factory. Some people climbed onto the roof, hung banners and broke windows.

Red paint was also poured down the factory’s facade, symbolising the blood of the Palestinians that campaigners claim are killed with equipment manufactured by Elbit Systems:

Elbit Systems in Shenstone is still shut down as activists enter day two of the factory occupation. Elbit is bleeding and their windows are smashed. #ShutElbitDown pic.twitter.com/zxfu2NkYym

A video by Real Media shows what appears to be Elbit’s rooftop air conditioning units being damaged:

A response to unrelenting colonisation

This year marks the thirteenth year of the Israeli siege of the Gaza strip. It’s also the year in which the UN predicted that life on the strip would become “unliveable”. During Summer 2020, Palestinians in Gaza have again faced Israeli bombing.

Israeli prime minister Benjamin Netanyahu has tried to advance plans for an annexation of the Jordan Valley. This would have been the largest Israeli land grab for decades. Netanyahu has been emboldened by the support of US president Trump.

Currently, the annexation plans are stalled, but they may return to the table. In the meantime, the Israeli state has announced the approval of almost a thousand new houses in Israel’s colonies.

In response, a month ago, UK solidarity campaigners came together to form a new direct action network –Palestine Action.

A campaign that is gathering momentum

Palestine Action has carried out 15 acts of direct action since then. From adhacking London buses and bus stops around England with messages against Israeli apartheid, to occupying Elbit Systems’ London office repeatedly.

Watch this Real Media video of one of the occupations of the London office:

The action took place at UAV Engines Ltd (UEL) in Shenstone in the Midlands, a factory owned by Elbit Systems. Elbit is Israel’s largest private weapons manufacturer. It is responsible for manufacturing a majority of the drones used to drop bombs on Palestinians in Gaza, and owns IMI Systems. IMI is the sole supplier of small calibre ammunition to the Israeli army, who use it in their violent military occupation of Palestine.

UEL is accused of manufacturing engines for the Hermes 450 drone. The Hermes 450 is one of the drones which Israel has used to fire missiles into the Gaza Strip.

According to The Intercept, a Hermes 450 was deployed during an attack that killed four boys from the Bakr family during Israel’s assault on Gaza in 2014.

Elbit Systems openly market their weapons as “field-tested” on Palestinian civilians in Gaza. They provide the Israeli military with over 80% of its military drone fleet, which is used to terrorise and massacre Palestinians in Gaza. These drones include the military drones Hermes 900 and Hermes 450 which were employed extensively during the 51 day attack on Gaza in 2014, which killed over 2200 Palestinians including 500 children.

[We] are calling for the factory and all Elbit Systems sites to be shut down in the UK, and an end to UK complicity with Israeli apartheid.

In 2009, UAV Engines (UEL) denied that engines manufactured in Shenstone were used by the Israeli military, instead claiming that they are manufactured for the UK’s Watchkeeper drone. However, a PDF from a 2017 arms fair listed the Hermes 450 as being kitted-out with UEL equipment.

The Canary contacted UEL to ask if it still maintained its position that engines made in Shenstone were not used in Israel’s drones. We had not received a reply at the time of publication.

In Shenstone the action is ongoing

The rooftop occupiers remained on the roof overnight, and spirits were high on 15 September:

#ShutElbitDown at Shenstone is still ongoing! UK activists have shut down the @ElbitSystemsLtd terror facility on Monday morning and are still strong at it!✊🏾✊🏾 Follow @Pal_action for updates.#BDS #abolishapartheid
pic.twitter.com/cLHrQk1QDw

The occupation continued throughout day. As the demonstrators spent another night on the roof, Israel launched another bomb attack on Gaza.

Palestine Action tweeted that on Tuesday night red paint had been thrown at the doors of Elbit’s offices in London:

At the time of writing, the action IS still going strong. And what seems certain is that Palestine Action is going to keep on building a more militant, direct action-focused Palestine solidarity movement in the UK against Israeli apartheid.