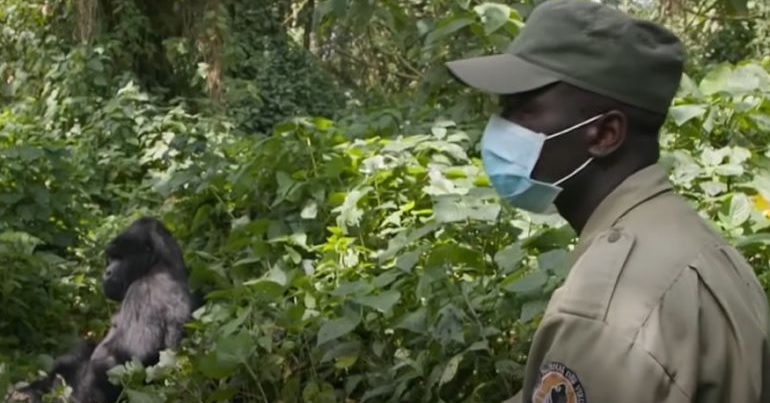 Conservationists have been raising the alarm about the potential transmission of coronavirus (Covid-19) from humans to other great apes since the virus shook the world in 2020. Now their worst nightmare has come true. A number of gorillas at San Diego Zoo and Safari Park have tested positive for SARS-CoV-2.

Aside from humans, all great ape species are either endangered or critically endangered. So the now-proven susceptibility of gorillas to coronavirus is deeply troubling in terms of the survival of humans’ closest living relatives.

According to Steve Unwin, a zoo health management specialist and lecturer in biosystems and environmental change, 40% of pathogens affecting humans and other great apes can transfer between the two. As a zoonotic disease – a disease that spreads between humans and other animals – we were also well aware that coronavirus could spread from humans to other species. Until recently, recorded cases of such contagion included mink (wild and farmed), lions, tigers, pumas, snow leopards, domestic cats and dogs – but not other great apes.

Now San Diego Zoo and Safari Park has announced that SARS-CoV-2 has been detected in the dung of three gorillas there. The venue’s executive director, Lisa Peterson, said in a statement:

Despite all our efforts and dedication from our team members to protect the wildlife in our care, our gorilla troop has tested positive for SARS-CoV-2

The facility believes that an asymptomatic staff member may be the source of transmission. It is currently testing the faeces of the other individuals in the group, to see if it has spread to them too.

San Diego Zoo and Safari Park says that the affected gorillas have some coughing and congestion. So they’ve had relatively mild symptoms so far. But, as the Robert Koch Institute’s primate infectious disease ecologist, Fabian Leendertz, told Mongabay:

Now it is important to see how severe the disease gets and how it spreads BUT even if the disease remains rather mild, this does NOT mean that it will be the same for wild great apes since here many other factors are present which may lead to more severe disease.

Past outbreaks of zoonotic diseases provide reason for concern. Ebola is a rare but often fatal virus. The World Health Organisation (WHO) says that death rates among humans “have varied from 25% to 90% in past outbreaks”. As National Geographic reported in 2019:

It’s possible that as much as a third of the global Western lowland gorilla population, a critically endangered subspecies, was wiped out by Ebola in the early 2000s

To what extent coronavirus will impact the infected gorillas is yet to seen. But it’s important to note that, unlike humans, other great apes can’t describe their symptoms or put themselves into quarantine. National Geographic said that such factors resulted in a “far higher mortality rate” among gorilla populations that became infected with Ebola, in comparison to their human relations.

Conservationist Gladys Kalema-Zikusoka, who founded the NGO Conservation Through Public Health (CTPH) in Uganda, told The Canary she was saddened by the news of the gorilla infections and hopes they have a speedy recovery. But she said CTPH has been warning about the risk of transmission since the onset of the pandemic because:

For endangered and critically endangered gorilla species, which live in close-knit family groups, the risks of COVID-19 infection are enormous, with the potential to completely wipe out family groups or sub-species.

That’s why CTPH, whose programmes are rooted in the three related areas of wildlife conservation, alternative livelihoods and community health, has been taking precautions. Kalema-Zikusoka explained:

CTPH has been prioritizing efforts to prevent and mitigate the spread of COVID-19 infection both amongst people in the communities surrounding mountain gorilla habitats, and from humans to gorillas. We have led a number of trainings and sensitization sessions on measures to prevent the risk of infection spread and have supported the adoption of COVID-19 prevention protocols developed by the Uganda Wildlife Authority for all people coming into contact with the mountain gorillas in and around Bwindi Impenetrable and Mgahinga National Parks.

She said such prevention measures include “consistent and effective mask use, hand sanitizing and disinfection of hiking boots, temperature checks of people entering the gorilla habitat and ensuring a distance of 10 meters when viewing or monitoring the gorillas”.

Perhaps it [the transmission] was inevitable despite the precautions, given how contagious this virus is… we can but hope that for these gorillas – as for the vast majority of humans – it is not a lethal disease.

Gorillas, orangutans, bonobos, and chimpanzees – the great ape species aside from humans – already face numerous threats. These dangers, which account for their endangered and critically endangered classifications, include the destruction of their homes and the wildlife trade.

Meanwhile, their human protectors also regularly put themselves in harm’s way to try and keep them safe. Six rangers recently tragically lost their lives in Virunga National Park in the DRC doing so.

Given their already precarious situation, Redmond says the San Diego outbreak raises “serious concerns” about tourism involving great apes and other primates, particularly “indoors in captive facilities”. Those concerns are clearly shared by others in the conservation sector, as Kalema-Zikusoka’s comments – and CTPH’s efforts – show.

But it’s not just conservationists who should be concerned. Non-human great apes are keystone species. That means the ecosystems in which they exist rely on their presence. Without them, those ecological systems collapse because so many other species are dependent on them. Those ecosystems, in turn, prop up the wider climatic stability of the Earth.

So we’re all effectively reliant on – and in debt to – gorillas, orangutans, bonobos and chimpanzees. We owe it to them – and ourselves – to do everything we can to save them.