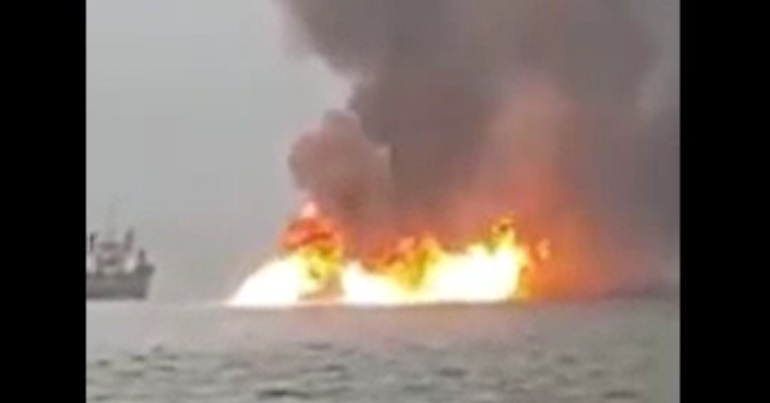 The UN released the largest ever opinion poll on the climate crisis on 26 January. Involving 1.2 million respondents spanning 50 countries around the world, the People’s Climate Vote is both comprehensive and crystal clear. It found that two-thirds of people believe we are in a “global emergency” and want decisive action to tackle it.

But news that emerged a couple of days earlier from Nigeria is a timely reminder of how far the world is from adequately tackling this global emergency. According to the NGO Health of Mother Earth Foundation (HOMEF), an oil rig fire has been raging in the country for eight months.

News reports say the fire initially broke out at an oil well in the Ondo state in May 2020. As Africa Oil+Gas Report magazine reported shortly after the blaze began, the rig – Grace-1 HWU – was “working for the Nigerian independent [company] Guarantee Petroleum” at the time. However, as the magazine also noted, the Nigerian government had revoked Guarantee Petroleum’s licence during its operations in 2020. As a result, the government assumed responsibility for tackling the fire.

Oil giant Chevron, meanwhile, is the operator of the oil mining lease in the relevant area – OML 95. After the fire broke out, its public affairs general manager told Africa Oil+Gas Report that the fire had occurred at “a third-party facility”, not operated by Chevron or its affiliates. The company said, however, that it was “prepared to provide necessary emergency response assistance in accordance with petroleum industry emergency response protocol”.

“This impunity must stop”

Nigeria’s Department of Petroleum Resources (DPR) told Africa Oil+Gas Report in May 2020 that it would do “all it could” to put out the fire. According to HOMEF, that same month the country’s National Oil Spill Detection and Response Agency (NOSDRA) also said it would take at least six weeks to extinguish the blaze.

But, as HOMEF said in a recent press release the fire is ‘raging on’ still. It also claims that the blaze has had:

huge impacts on the environment generally, the aquatic ecosystem particularly and the livelihoods of community members, especially fishers

The group referred to the ongoing incident as an “act of ecocide”. But it says the government has offered no “clear communication on how the environment will be remediated”. The group’s director, Nnimmo Bassey, commented:

It is sad to note that national, international and government-owned oil companies operating in the Niger Delta are rapidly setting a pattern of totally ignoring oil spills for weeks and months in the same way they have ignored gas flares for decades.

This impunity must stop. Our people deserve better. The Niger Delta must not continue to be a sacrifice zone

HOMEF is calling on the DPR to put out the fire and “remediate the environment”. It’s also urging the government to compensate those impacted by the fire, such as fishers and communities. Furthermore, it’s demanding sanctions against whichever company is ultimately responsible for causing the “gross ecological damage”.

The Canary contacted the DPR and Nigeria’s Environment Assessment Department for comment. Neither responded by the time of publication.

Leave the oil in the soil

As Bassey laid out in his 2012 book, To Cook a Continent: Destructive Extraction and the Climate Crisis in Africa, the extractive industries, including the oil and gas industry, have a long history of reeking environmental devastation on the African continent. Such extraction shows no sign of slowing either.

Citizens in Africa have long been fighting against the environmental and human rights abuses they’ve faced thanks to the extractive industries. Now, in the biggest poll of its kind, two-thirds of the world’s citizens have recognised that the climate crisis represents a “global emergency”. The UNDP’s strategic adviser on climate change, Cassie Flynn, said:

The voice of the people is clear – they want action on climate change.

In his book, Bassey was also clear about what that action should be:

The world knows that the climate challenge is caused primarily by the release of carbon into the atmosphere through the burning of fossil fuels.

The simple answer to our climate crisis, one begging to be accepted, is that we must simply leave the oil in the soil, the coal in the hole and the tar sands in the land. We do not require expensive carbon capture and storage technologies to make this happen. It’s just common sense. Simple.

We must leave fossil fuels in the soils, holes and lands. If there’s an environmental catastrophe involving extraction that’s already taken place, we must also work quickly and diligently to clean it up.

We cannot afford to continue the environmental destruction and recklessness that’s been characteristic of ‘human progress’ to date. The world’s people are waking up en masse to that. It’s high time those who wield power do the same.